Donald Trump Responds to Impeachment With a Meme | 22 Words 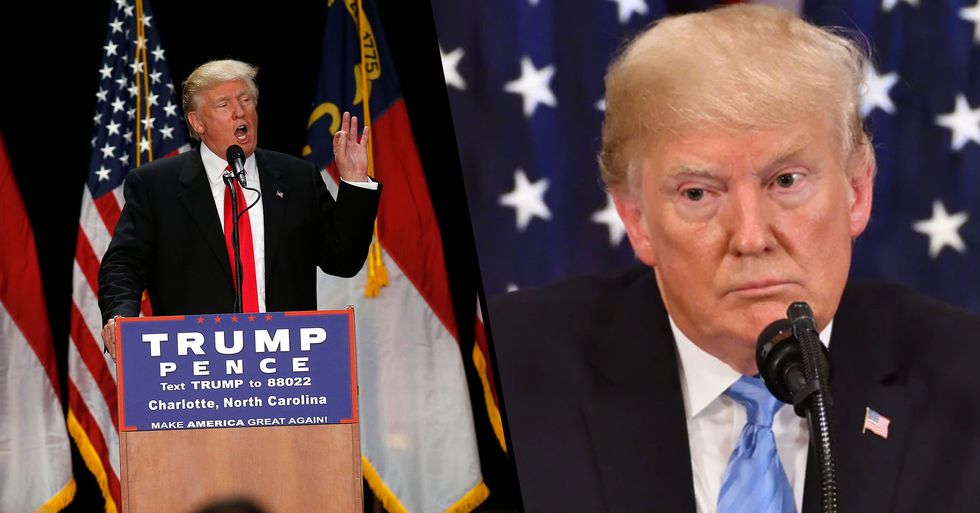 Donald Trump Responds to Impeachment With a Meme

Over the past couple of months, an impeachment inquiry against President Trump has been underway. And yesterday, it officially happened: Donald Trump has become the third U.S. President to be formally impeached.

In response to this result, President Trump has posted a meme. Keep scrolling to see his unexpected tweet...

Nancy Pelosi made an announcement that shocked the world.

The speaker announced that she, as well as the U.S. House of Representatives, had started a formal inquiry into the impeachment of the President of the United States.

But what does "impeachment" actually mean?

The current President of the United States, Donald Trump is believed to have engaged in criminal activity.

The business tycoon has been charged with 2 offenses.

The first is an abuse of power. It accuses the President of trying to pressure Ukraine to smear his political rival, Democratic presidential contender Joe Biden, in a bid to cheat his way into winning the 2020 elections.

Trump attempted to clear his name...

And, in doing so, released a snippet of an April telephone conversation that he had with President Volodymyr Zelensky of Ukraine that contradicted the summary of the call released by the White House in the months prior.

And the 2 men could be heard praising each other’s political ingenuity while predicting an era of good relations between the U.S. and Ukraine.

But the Whitehouse's version of the phonecall begged to differ...

Their transcript of the call revealed that Trump had actually urged President Volodymyr Zelensky to investigate former U.S. Vice-President Joe Biden, the frontrunner to take down Trump in next year's election, as well as Mr. Biden's son.

This in itself is thought to be definitive evidence of Trump's law-breaking...

And he is accused of seeking foreign help in an attempt to tarnish Biden's reputation in the run-up to the 2020 elections.

He is also accused of holding back major deals from Ukraine in an attempt to get the information...

$400 million of military aid, to be precise.

Yet, despite this growing pile of evidence...

It seems like the President will not own up because he has consistently insisted on his innocence.

And the second charge of his impeachment is for obstructing Congress.

The President is accused of blocking his aides from testifying and failing to co-operate with the House impeachment investigation.

And, again, it involves his relationship with foreign leaders.

The House Judiciary Committee Chairman Rep, Jerrold Nadler, said the president had been blocking the ongoing impeachment inquiry dating from the 2016 election, with it all relating to his alleged Russian interference.

Trump has profusely denied both these hefty charges and maintains that it was appropriate to ask Ukraine to look into the alleged corruption.

But not everyone was too convinced.

Pelosi has stressed the importance of these charges. "The actions taken to date by the President have seriously violated the constitution. The President must be held accountable. No one is above the law."

And with the 2020 elections on the horizon, this will certainly pose a threat to Trump's re-election.

Even members of his own cabinet have turned against him.

As the investigation has been underway, Trump hasn't been shy about addressing his bleak situation.

And he has done it in the most Donald Trump way possible.

He has been taking to Twitter to express his anger over the situation.

Because how else would he address his country and the rest of the world?

He hasn't been holding back.

He tweeted while at a United Nations presentation.

And he hasn't been shy with the name-dropping.

Which is seen by some as a method to defend himself.

The President has been consistently defensive, and has labelled the inquiry a "witch hunt."

And, as the official inquiry date approached...

Things began to get more serious.

He has slammed the whole process as "sheer political madness"...

And is evidently rather baffled as to how one of "the most successful Presidencies ever" could even be facing impeachment in the first place.

A LOT to unpack in this stream of consciousness, 6 page letter from @realDonaldTrump to @SpeakerPelosi. One sampl… https://t.co/X6DL61GzHY
— Elizabeth Landers (@Elizabeth Landers)1576610766.0

The day before the full house was scheduled to vote, he penned a lengthy and rather angry 6-page letter to Nancy Pelosi, in which he accused the House Democrats of “declaring open war on American democracy."

In the letter, Trump painted himself as a victim...

And, addressing the House Speaker, wrote, "You do not know, nor do you care, the great damage and hurt you have inflicted upon wonderful and loving members of my family."

And he expressed how he believes the inquiry is a "personal attack."

Trump went on to accuse Pelosi of violating her own oath of office: "You are offending Americans of faith by continually saying 'I pray for the President,' when you know this statement is not true unless it is meant in a negative sense," Trump wrote in the letter. "It is a terrible thing you are doing, but you will have to live with it, not I!"

The President was clearly upset.

“You have cheapened the importance of the very ugly word, Impeachment!" Trump wrote.

But, throughout it all, he continued tweeting words of confidence...

And has regularly referenced the dropping poll numbers of the "Democrat Scam"...

Yet, despite his confidence...

And the Republican's efforts yesterday to block the articles of impeachment, it was all to no avail.

The President has officially been impeached.

After months of investigations and inquiries, the President has finally faced his impeachment.

This meme reads: "In reality, they are not after me they are after you, I'm just in the way." This is an ongoing story, stay tuned for more details.