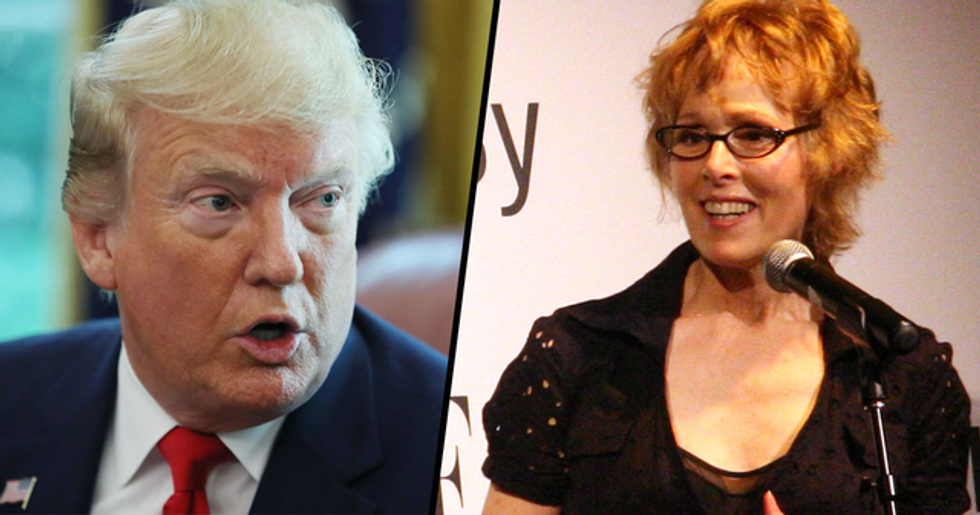 President Trump can't seem to go one day without a fresh rumor or allegation being made against him, can he?

Well, believe it or not, the President has yet again found himself in hot water this week after another woman recently came forward with sexual assault allegations.

New York-based writer, E. Jean Carroll, relived the alleged sexual assault in an excerpt of her forthcoming book, stirring up disgust and horror across the United States. And President Trump has now responded to the damning accusation in the only way he knows how... By ranting angrily in an interview, then going on to insult and degrade the poor woman.

President Trump is no stranger to controversy.

Ever since he's been in the spotlight, Trump has been making headlines with his brass mannerisms and crude behavior around women.

In the past, numerous allegations have been made against the President.

In total, twenty-two different women have come forward with sexual assault and rape accusations against Donald Trump who, of course, denied them all. For any man, this is a disgustingly high number (any number is a disgustingly high number) and it's completely unacceptable, but for the man who runs the United States of America? There are no words.

And these allegations have never been a secret.

As a country, we knew about these sexual assault accusations when we elected him as President in 2016. It wasn't our finest hour, was it?

The allegations all stem from his business days...

He seemed to magically start behaving himself (if you can call it that) once his Presidency began. Trump was a real-estater and a millionaire business tycoon, and was often out at lavish parties with a number of celebrities.

He has boasted about his antics in the past...

We won't be forgetting this incident in a hurry. Just weeks before the 2016 General Elections, The Washington Post unearthed a recorded conversation between a pre-President Trump and Billy Bush, in which the men have "banter" (as he called it...) while unaware their microphones were switched on.

Trump made some pretty derogatory statements.

In this "banter," Trump was heard boasting about how his celebrity status makes it easy to pursue women. He bragged, "You know I’m automatically attracted to beautiful — I just start kissing them. It’s like a magnet. Just kiss. I don’t even wait."

It's needless to say, people all over the world were left disgusted.

So we all know that his track record with women isn't great.

And that's putting it lightly. The President publicly apologized for his comments, claiming that they were a long time ago and that they don't reflect the person that he is today.

But, sadly, we can't change the past.

And the past has certainly stuck around to haunt the President. Since the fantastic #metoo movement, more and more women are gaining the confidence to speak out against their perpetrators and attackers, and have brought many powerful men to justice.

And Trump's latest accuser is one of those women.

E. Jean Carroll is a New York-based writer and has run her "Ask E. Jean" column in Elle Magazine since 1993. Carroll has always been well known for her handy advice on topics such as dating, careers, and lifestyle choices. But, now, she has made headlines for a very different reason.

She has made a damning accusation in her new book.

Her new book, titled, What Do We Need Men For?: A Modest Proposal, is set to be released July 2nd. The book discusses her past experiences with men and the sexual abuse that she endured, which started in childhood.  She released a harrowing excerpt in New York Magazine, which detailed her interaction with the to-be President at a Bergdorf Goodman store in Manhattan in late 1995 or early 1996.

She accused him of rape.

In the excerpt, Carroll explains how the pair had bumped into each other while shopping. He had allegedly asked her for advice while buying lingerie for another woman and went on to ask her to model the garments for him. Once in the dressing room together, Trump apparently "lunged" at her.

She claims that the assault lasted for around 3 minutes.

"He pushes me against the wall, hitting my head quite badly, and puts his mouth against my lips. I am so shocked I shove him back and start laughing again," Carroll wrote in her book. "He holds me against the wall with his shoulder and jams his hand under my coat dress and pulls down my tights." She then goes on to describe how he "briefly" penetrated her.

The world responded in horror.

I love #EJeanCarroll - a superb, honest advice columnist for @ELLEmagazine and an all-around great writer. There is… https://t.co/ONvhLPyPLM
— Jennifer Bevan (@Jennifer Bevan)1561141827.0

Women, in particular, rallied around the writer and voiced their disgust at the injustice of the situation. One Twitter-user urged the President to resign, "Step down, man... The joke that you are is not funny, anymore. #EJeanCarroll #22ndwomanmolested." Another wrote: "I am angry about this. Why is this man still the President of the United States?"

And the perpetrator himself?

Well, the President has responded to these allegations in true Trump fashion. Because, let's face it, we wouldn't expect anything less of him. On Friday, President Trump released a statement responding to Carroll’s story, in which he profusely denied the accusations.

He claimed to have never met her.

I can't believe I didn't notice this before, but as @RHAVote pointed out, BOTH of the women in this photograph have… https://t.co/dNshMpuKGV
— Jessica Valenti (@Jessica Valenti)1561161430.0

In his statement, he expressed, “I’ve never met this person in my life." Which is funny, considering there are several photographs of the pair together, including this picture which shows him, her, and their then-spouses, talking at a party in 1987.

He then went on to say that Carroll isn't his type.

He can't have possibly assaulted her, then. In an interview with The Hill, he said, “I’ll say it with great respect: Number one, she’s not my type. Number two, it never happened. It never happened, okay?" Apparently, Donald has a certain "type" of woman on whom he likes to make advances. Back in 2016, he used a similar line in conversation about a woman who had also accused him of assaulting her, stating that "she wouldn't be my first choice." As if that should make any difference...

He also claimed that she is only trying to push her sales.

He insisted that she is simply "trying to sell a new book" and is "peddling fake news." Yes, because the only way for an already successful writer to sell a book is to accuse the President of rape...

Carroll has since responded to "not being his type."

In an interview with CNN, Carroll expressed her delight, saying "I love that I'm not his type." And on the topic of why it's taken her so long to come forward, Carroll wrote in her excerpt, "Receiving death threats, being driven from my home, being dismissed, being dragged through the mud, and joining the 15 women who’ve come forward with credible stories about how the man grabbed, badgered, belittled, mauled, molested, and assaulted them, only to see the man turn it around, deny, threaten, and attack them, never sounded like much fun. Also, I am a coward."

What consequences? Despite the incredibly serious nature and sheer volume of allegations made against the President, action has never been taken. Instead, the President simply waves away the accusations like they're an annoying fly, and the poor women coming forward are subjected to mockery, laughter, and are subsequently dismissed. Though the #metoo movement has made some incredible progress, President Trump is out of reach and simply untouchable.