Presidential Candidate Andrew Yang Wants To Give $12,000 To Everyone | 22 Words 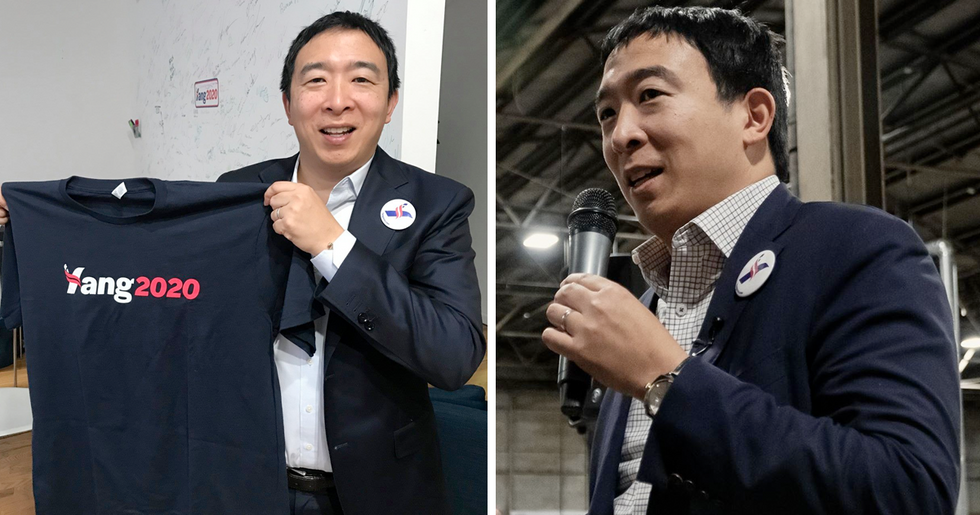 Presidential Candidate Andrew Yang Wants To Give $12,000 To Everyone

As the new presidential election year is fast approaching, one name has managed to stand out from the rest.

Andrew Yang is called the most radical candidate in the 2020 elections. And he seems to be on a promising run for the title.

But it's not just his impressive credentials that have turned polls to his side.

Yang has been very outspoken about the social issues that he strongly believes need to and can be tackled. The list is long and includes Medicare for all, legalized marijuana, and circumcision.

He has been compared to Trump because he believes he can solve the problem that Trump has promised his supporters but eventually couldn't.

To make sure automatization doesn't take people's jobs away, leaving them with no income and Yang wants to give each citizen $1,000 every month.

Some people even believe it's a great idea.

Read on for a video of Yang explaining his plan in more detail.

It's just over a year and a half left until the next presidential election.

And the race is crowded, The Cut says, with plenty of promising well-known names, including Elizabeth Warren and Cory Booker.

One candidate has managed to stand out from the crowd.

Entrepreneur Andrew Yang, with a following that calls themselves the #YangGang, is promising to take a big step forward when it comes to today's social issues.

By the end of 2017, Yang had already launched his presidential bid but no one took him seriously.

Flash forward 1 year and some polls are giving him quite promising odds.

Who is Andrew Yang?

Once a lawyer, now a tech guy, Yang has recently launched the nonprofit Venture for America which encourages entrepreneurs to start businesses in those US cities that are experiencing an industrial decline.

But he cares about other major social issues too.

That includes "Medicare for all, legalized marijuana, paid parental leave," and reparations, according to The Cut.

He has proposed an American Mall Act which would help revitalize shuttered malls.

He supports "human-centered capitalism," which is the opposite of socialism.

He has even publicly admitted on Twitter he's opposed to circumcision.

Yang supports intactivists - a movement of people who, according to The Cut: "believe that doctors should never cut off a penis’ foreskin, comparing it to removing a male baby’s finger or lips."

Yang promises to work on this issue if he was elected.

He would support organizations who inform parents about circumcision and why it's not necessary to keep their babies healthy.

The Week calls Yang the most radical 2020 presidential candidate.

They wrote: "Has the Democratic Party really gone off the radical deep end?"

"It sometimes sounds like it from their fiery rhetoric, and the broad embrace of expansive visions, like the Green New Deal."

"But in fact, the overwhelming majority of the serious candidates [...] are traditional progressive reformers who would fall well within the recent Democratic mainstream."

"They have a variety of plans and proposals to solve America's problems."

"But there's a third candidate who has articulated an even more radical critique of America's political economy, one so radical you might almost miss it because of his calm demeanor, establishment credentials, and the relative moderation of his proposed solutions."

"Indeed, his critique is so radical that it's not clear even he has grasped the true extent of its implications."

But probably, the most radical action Yang is willing to take is his Freedom Dividend policy.

He wants to grant $1,000 every month to every US citizen who's over eighteen years old, according to The Cut.

That's his solution to the loss of jobs that comes with rapid automatization.

The Freedom Dividend is "a form of universal basic income (UBI)," much favored by many entrepreneurs, including Mark Zuckerberg.

The policy is supposed to prevent a "robot apocalypse," in which millions of people lose their jobs to machines.

"All you need is self-driving cars to destabilize society," Yang has told The New York Times. "[In a few years] we’re going to have a million truck drivers out of work who are ninety-four percent male, with an average level of education of high school or one year of college."

"And we’re about to do the same thing to retail workers, call center workers, fast-food workers, insurance companies, accounting firms."

Yang believes UBI is the best solution to the problem Trump promised to solve but couldn't deliver.

"We have to solve the problems that got Donald Trump elected in 2016," Yang told ABC.

He added: "And to me, the main driver of his victory was that we automated away 4 million manufacturing jobs in Michigan, Ohio, Pennsylvania, Wisconsin, the swing states he needed to win."

He assured TMZ that "$1,000 monthly stipend to all adults won't make people lazy." Instead, it would have the opposite effect.

He said: "Evidence shows that it would actually make people want to get jobs and education."

Had a great time hearing @AndrewYang speak in Boston. The man knows what he is talking about AND has the evidence t… https://t.co/rtq81Magll
— Ethan Sternberg (@Ethan Sternberg)1554938139.0

Evidence that is not necessarily from other countries but right here in the United States.

In the video, Yang also addressed some comparissons to Donald Trump that people have been making.

In short, he believed Trump does not represent every entrepreneur-turned-politician, and Yang believes he can do better.

Some Facebook users agree that it might be a great idea, however, it needs to be adjusted.

Sandra Jintoorkar wrote: "Australia does it. Why not us? It would just go back into the economy. Why are we so against people in general having a decent standard of living? Wtf is wrong with Americans? So assbackwards and stupid."

Melanie S. Bristow said: "You know if this was actually done it would allow a lot of mothers to be able to stay home with their children and be there for them when they need to be."

She added: "There are also disabled people out there who don’t get enough on disability. This could help a lot of people out but I don’t agree with sending it to somebody saying like 18 who’s in college or something like that."

"Send it to families or people who are disabled that really need it not able bodied people who were going to school and things like that."

Melanie Gilbert agreed, "I feel you I am disabled and my daughter turns 18 in August. I don’t know how I will feed us because her check drops when she turns 18."

"I have to live with my mother at 46 years old and I was an ESCROW OFFICER."

"People don’t know until it happens to them. My daughter has health issues but not enough to get her disabled."

Pied Piper said: "They do it in Alaska. They can do it in the other 49 states."

"Also it doesn’t raise taxes. He stated that already go see his breakfast club interview. He got my vote ?"

However, the aftermaths of Trump's election have taught others to be more cautious when it comes to presidential promises.

Mike Scheller said: "I remember when I ran for class president in elementary school and promised everyone root beer in the drinking fountains. Guess what, no root beer."

Anthony Ysasaga believed that, eventually, $1,000 wouldn't be enough for the people, he said: "Give a man a fish and he'll eat for the day. The next day, he'll want more fish..."

So should we take Andrew Yang's presidential campaign seriously?

The Cut believes that Yang is very unlikely to become the next President of the United States.

Still, you can't deny that the competition is fierce and he's doing surprisingly well.

"It is notable that in some polls, people are giving him better odds than veteran politicians like Kirsten Gillibrand, Tulsi Gabbard, and Pete Buttigieg," The Cut added.

"Across just February and March, Yang raised $1.7 million, and in total has received donations from more than 80,000 people."

That means that we'll get to see Andrew Yang in the first Democratic debate. And who knows, he might just surprise us again.