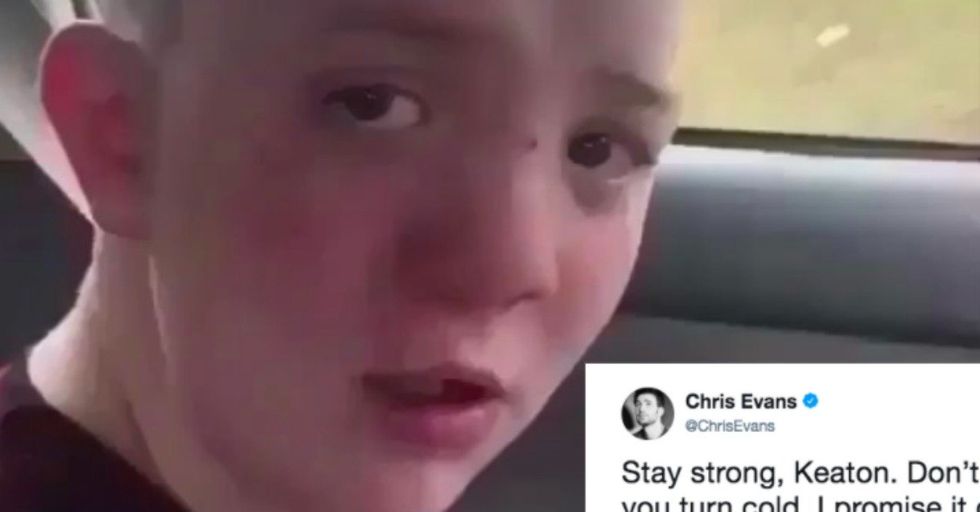 Pretty Much Every Celebrity Ever Tweeted Their Support for This Bullied Kid, But the Story Doesn't End There

Sometimes, Twitter is a good place. It's not every day that a bullied kid shares his raw emotions about what it's like to be picked on, and his video goes mega-viral, resulting in hundreds of heartfelt messages from the biggest celebrities on the planet (including several of the Avengers). But that's what happened when Keaton Jones from Tennessee posted his message.

Of course, like all viral stories, it doesn't end there. The more we learn, the more complicated the saga becomes.

This is Keaton Jones, he lives in Knoxville and he has a little something to say about bullying. https://t.co/coyQxFp33V
— OutKick Bets (@OutKick Bets)1512852839.0

"They make fun of my nose. They call me ugly. They say I have no friends," he said. The bullies would "put milk on me and put ham down my clothes, throw bread at me." As Keaton described his experiences, he became more and more incredulous. A nice kid like Keaton couldn't fathom why bullies did what they did. "Just out of curiosity," he asked, "why do they bully? What's the point of it? Why do you find joy in taking innocent people and finding a way to be mean to them? It's not OK." "People that are different don't need to be criticized about it. It's not their fault."

Keaton's video immediately went viral, and celebrities from all over took to Twitter to show their support for Keaton.

Tennessee Titans player Delanie Walker offered Keaton and his family tickets to a game and let Keaton know that he was sorry he was bullied.

Millie Bobby Brown, who plays Eleven on Stranger Things, is no stranger to facing harsh criticism from people who don't know her.

She let Keaton know she empathizes with him and relates to what he's going through. It's not easy being a kid at all, and when you're massively famous like Brown is, there's that added layer of exposure and pressure.

The #StandWithKeaton hashtag took off, and celebs like Demi Lovato reached out to Keaton.

I #StandwithKeaton. Keaton baby, just know you’re not alone. There are so many people who come out of bullying so m… https://t.co/mvyDL0jVCr
— Demi Lovato (@Demi Lovato)1512954528.0

The outpouring of love and support from celebrities just reinforces how important the issue of bullying is — it's a pervasive and destructive force that many kids unfortunately face.

Keaton's sister Lakyn started fielding messages because the response was so huge.

True Grit and Pitch Perfect 2 actor Hailee Steinfeld made a video for Keaton. "I just wanted to say I think you are amazing, and what makes you so special is that there is only one you," she said. "And I would love for you, Keaton Jones, to be my date to the Pitch Perfect 3 premiere." It's safe to say that Keaton Jones is learning there is a lot more love in this world than hate. But the celebrity support and offers weren't remotely done flying in yet...

Comedian and filmmaker Kumail Nanjiani's message to Keaton? It gets better.

Keaton has already demonstrated such strength and resilience in dealing with his bullies, and while it may seem like the abuse will never end, Nanjiani wants him to know that it does get better.

Boyhood actor Patricia Arquette offered her sympathy for Keaton along with a couple words of wisdom.

@JamieOGrady @Lakyn_Jones Keaton, I'm sorry those kids are being so mean. Unless people like that change they will… https://t.co/gbltqH5nYJ
— Patricia Arquette (@Patricia Arquette)1512860600.0

"Unless people like that change, they will end up having unhappy lives." There's nothing Keaton can do except continue to be the strong, respectful individual he is. When he grows up, it's his character that will really matter.

Keaton's message spread so far and wide that it was time for the Avengers to get involved.

Captain American himself, Chris Evans, invited Keaton and his mom to the Avengers premiere in Los Angeles in 2018. We've thought so for a while, but Chris Evans proved with this move that he actually is a real-life superhero.

The Hulk wasn't going to let Captain America take this one by himself.

Mark Ruffalo invited Keaton to be his guest for the Infinity War premiere and offered his sage advice: "Forget those ignorant kids. One day, very soon, they are going to feel pretty stupid for this." We have a feeling that day might be today.

Snoop himself posted a message of love and support for Keaton.

"Say lil Man U gotta friend in me for life hit me on dm so we can chop it up love is the only way to beat hate." If this kid actually gets to "chop it up" with Snoop Dogg he will automatically become the coolest kid in school. No question. Believe it or not, the story doesn't end here. It manages to get kind of complicated...

White invited Keaton to hang out at UFC Headquarters in Vegas. When this is over, Keaton won't be bullied anymore because he'll be too busy hanging with the coolest people on the planet.

Even comedian Rob Delaney posted a humorous message to Keaton.

Delaney claimed that Chris Evans and Mark Ruffalo just wanted to use Keaton but that he actually wants to adopt him. Now that's commitment.

Hannity claimed that with the name of the school, the principal, and the school board members, he could "make the calls" and "fix this." We don't know what he thought he was going to do... But he also offered to fly Keaton and his parents to New York to be his guest and to visit Fox News.

That viral video of #KeatonJones talking about being bullied is heartbreaking, and I feel sympathetic towards that… https://t.co/Byu7Qfm9do
— Tariq Nasheed 🇺🇸 (@Tariq Nasheed 🇺🇸)1512981815.0

She's a suspected racist and a bully herself, apparently posting problematic messages "bullying Black protesters." It's a viral story on the Internet, so it had to backfire, right?

ESPN host Jemele Hill, who'd offered to host Keaton at ESPN, had the classiest of responses to the news about his mom:

Hill wrote that this is an opportunity for a "teachable moment." It's not OK for Keaton to be bullied — what happened to him was horrible. But it's also not OK for this mother to bully others. What she's doing is perpetuating the exact type of cycle of hate that her own son deals with at school. Maybe, if she's able to witness the love and support that results from Keaton sharing his message, she'll be able to see the power she holds in her own hands to stop the hate.