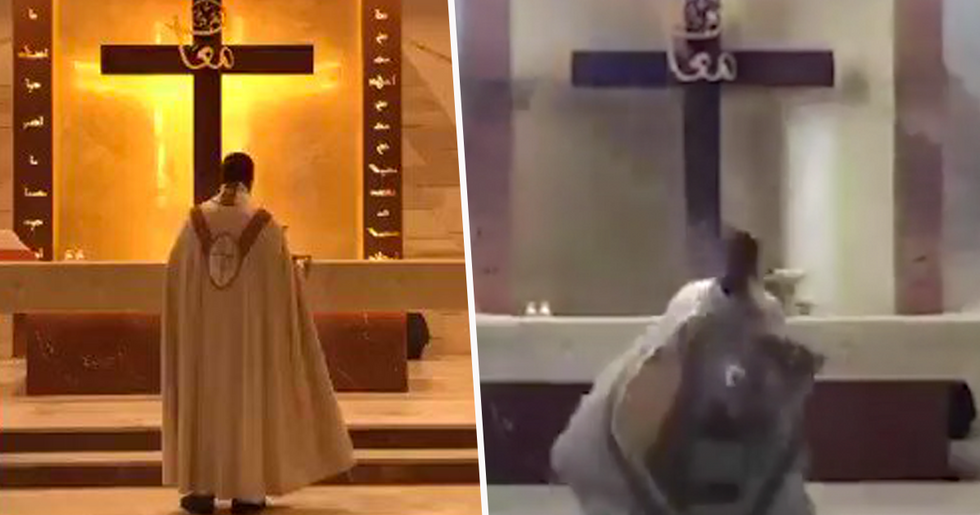 Following the shocking explosion in Lebanon's capital city yesterday, harrowing footage has emerged that shows a priest fleeing for his life as his church collapses in around him...

Yesterday, a massive explosion rocked the city of Beirut.

The footage from the blast is truly horrifying.

But today, Lebanon’s health minister has said that at least seventy-eight people have died, and a further 4,000 people have suffered injuries.

Those who ware injured were hastily whisked to hospitals across the city...

But these hospitals were so overwhelmed that they were forced to turn wounded people away, including the American University Hospital. Patients were then transported to hospitals outside of Beirut because those in the city were at maximum capacity.

But, sadly, the death toll is expected to rise drastically within the next couple of days.

Yet, as the search for survivors amongst the rubble continues...

Many of us are wondering the same thing.

How did such a devastating explosion occur right in the heart of the city, with next to no warning for its millions of residents?

But today, it has emerged that a huge cache of ammonium nitrate, an explosive compound commonly used in the construction of bombs, had been stored at the building in which the blast had occurred.

But, for now, footage from the aftermath of the event continues to emerge online.

However, amongst the many devastating videos emerging, there has been one that stands out amongst the rest.

A priest carrying out a service was filmed fleeing for his life as the explosion caused his church, which is believed to have been located close to the explosion site, to collapse around him. And now, the footage has gone viral online.

As the priest speaks, the lights suddenly go out...

And the camera begins to tremble.

As the shaking intensifies, debris from the roof begins to fall...

And the priest suddenly springs to action.

He can be seen leaping out of the way as huge chunks of the roof fall through...

And he collapses out of shot as the camera is knocked to the floor from the blast.

The priest's fate is currently unknown...

Shocking footage of a church caving in as a priest says Mass in Lebanon today during the explosion in Beirut.… https://t.co/wwSQDiJdK6
— Catholic Arena (@Catholic Arena)1596574019.0

But a woman on Twitter claiming to know him has insisted that he is "alive and well." You can watch the remarkable footage above.

Our thoughts go out to the people of Beirut during this devastating time.