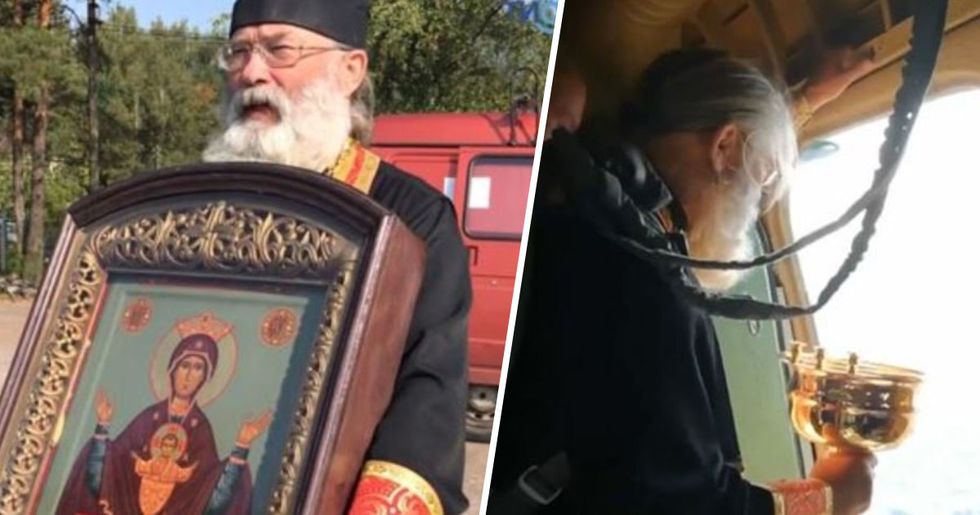 Practicing a religion is an individual's personal choice.

If a person wants to abide by the laws of their religion, then so be it! And if a person wishes to live their lives under their own rules, that's also fine!

Respecting the choices of others is important in many religions, so when a priest decides to air bomb a city with holy water to stop sinning, it's not a cool move...

A Russian priest decided to do just this over a city to stop "drinking" and "fornication," which, I must say, didn't work out that well. Keep scrolling to learn more...

Russia is a pretty religious country...

With it being one of the biggest countries in the world with a population of 144.5 million people, Russia is home to a staggering community of practicing Christians.

Eastern Orthodox Christianity is the most widely practiced faith in Russia.

In the Christian sense, the term Orthodox means "conforming to the Christian faith as represented in the creeds of the early Church."

The Orthodox Church shares many beliefs with other Christian churches...

It believes that God revealed himself through Jesus Christ, and also in the incarnation, crucifixion, and resurrection. The Orthodox Church differs substantially from the other Churches in the way of life and worship, however, and also in certain aspects of theology.

Members of the religion actively pursue "a righteous life in the grace and power of God granted to all who continue to believe in Him."

So when it comes to Heaven and Hell...

For Orthodox Christians, heaven is a part of Christian life and worship, while hell is the place of "eternal torment" for those who willfully reject the grace of God.

Non-believers are given a chance to "repent their sins..."

These sins are things such as having intimate relationships outside of marriage and the consumption of alcohol.

It turns out that the city of Tver in Russia enjoys indulging in these sins...

The small city is around 2 hours away from Moscow and frustrated priests of the Orthodox church are growing tired of the city's sinful ways.

Tver isn't the most religious of cities...

It was estimated that around thirty percent of Tver's population practiced Orthodox Christianity, meaning the other seventy percent either practiced another religion or didn't practice at all.

Apparently the residents of Tver drink a ton of vodka and fornicate quite regularly...

Because who doesn't enjoy drinking shots of vodka and flirting with strangers at a bar from time to time?

But this isn't always a good thing.

Russia had to put a stop to the excessive drinking that was happening around the country. Recent statistics from the World Health Organization indicates new laws banning the sale of alcohol at gas stations and in Moscow kiosks at night appear to have helped Russia cut its consumption of alcohol dramatically.

Many have argued that these stats cannot be trusted, however...

Experts have argued that alcohol consumption most certainly hasn't fallen by eighty percent as it was claimed.

The consumption of "non-beverage" alcohol is still very much a thing.

In December 2016, seventy-four people died in the Siberian city of Irkutsk from drinking scented bath lotion mislabeled as containing drinkable ethanol. The ingredient was actually methanol, a toxic substance used in antifreeze.

That is how desperate people can be to get their fix of alcohol...

And it's still a recurring problem to this very day in Tver.

It's safe to say that Orthodox priests aren't happy about this...

Father Alexander Goryachev, who is from Tver, tirelessly attempts to heal these "sinners" every year without fail.

This has happened every September since 2006, and the priest isn't just going on a pleasant airplane ride...

As a part of the city's never-ending battle with alcoholism and infidelity...

Father Alexander, along with several other priests from Tver, takes to the skies in an attempt to baptize the entire city with holy water.

The flight has taken part every year since 2006 to mark the Russian Orthodox Church's Day of Sobriety...

Approximately seventy liters of blessed water is poured through the open doors of the aircraft - all while Father Alexander is strapped into a harness so that he doesn't slip and fall out...

Speaking to local news outlet, Tver News, Father Alexander said: "A man saw our plane flying overhead, and told his wife there and then that he would give up the drink - and he did." "Every illness is caused by a virus, and viruses are demons. That’s why every illness is first and foremost a spiritual illness."

The priests involved genuinely believe that they are making a difference by throwing their holy water over the city, but, let's be honest, it's highly unlikely that throwing water from an airplane will cure alcoholism overnight. Keep scrolling to learn of a similar story in South America, in which a Catholic priest attempted to exorcize an entire city that was riddled with crime...