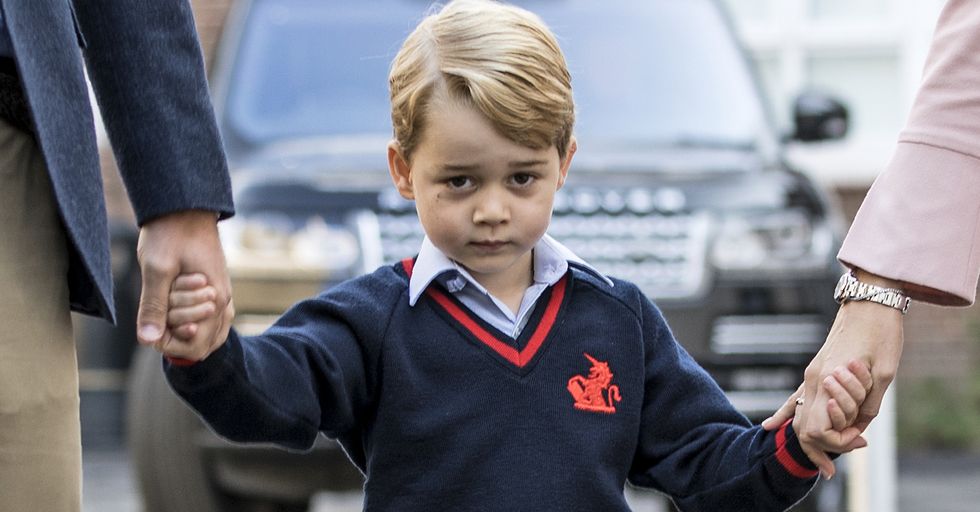 Celebrity consumption of a product is every marketing exec's dream. A purse is just a purse until it swings off the arm of a Kardashian; a book is just a book until Oprah reads it; and canned fish is just canned fish (or maybe chicken) until Jessica Simpson wonders about it.

Trend influencers come in all sizes apparently, because the latest item to strike gold with a celebrity "endorsement" has 4-year-old Prince George of England to thank.

Who among us didn't swoon at little Prince George on his first day of school?

We all saw the adorable photos of the young prince going to school on his first day accompanied by his royal dad Prince William. We collectively squeed and related as we packed our own kids off to school. Look! The royals are just like us!

"Honey, I'll wear my crown jewel diamonds and you should wear your ropey suit for the looking up event today!" I say to my husband, every time we go out.

Who are we kidding? They're not like us at all.

Today's menu at my kids' school included boneless chicken wings, "carrot coins", and Rice Krispie Treats. According the The Times of London, the menu at Prince George's school includes items such as "lamb ragout with garlic and herbs, pork stroganoff with red peppers and smoked mackerel on a bed of puy lentils."

Generally, we don't see a ton of legume-related trends.

In fact, lentil producers in central France have been struggling with sales due to poor crop yield and EU regulations, which complicate trade for farmers in general. But lentils are in demand (again?) thanks to one diminutive royal.

I'll have what he's having!

Orders for the French lentils have suddenly peaked ever since "news" broke of their appearance on the prince's lunch menu. Apparently, it isn't even confirmed if the young prince ate the lentils, but he was in proximity to them, and that's enough. People had some serious feelings about this fancy lunch menu...

Naturally, the internet had a field day with this.

When the news is about a four year old potentially eating French lentils, people are going to make fun of it. This is essentially the raison d'être of the internet, is it not?

Basically, lentils and the little prince look good, but England not so much.

It's always fun when another nation looks sillier than us for a minute. Thanks, England. Don't worry, we'll do something dumb soon.

France isn't getting off the hook either.

I fully believe that French lentils are more amazing than all other lentils - insofar as lentils can be amazing. But don't tell France I said that.

If you find the uptick in lentil sales confusing, you're not alone.

Lentils, after all, are lentils. This is no Birkin bag. How can a famous boy's proximity to the humble lentil really increase lentils' cachet? Ours is not to ask questions. Just pass the lentils.

Of course, millions of people already ate lentils before they were cool.

You know how lumberjacks dressed like lumberjacks before everyone in LA and Brooklyn did too? It's like that. Now we're asking the big questions...

Are lentils the new avocado?