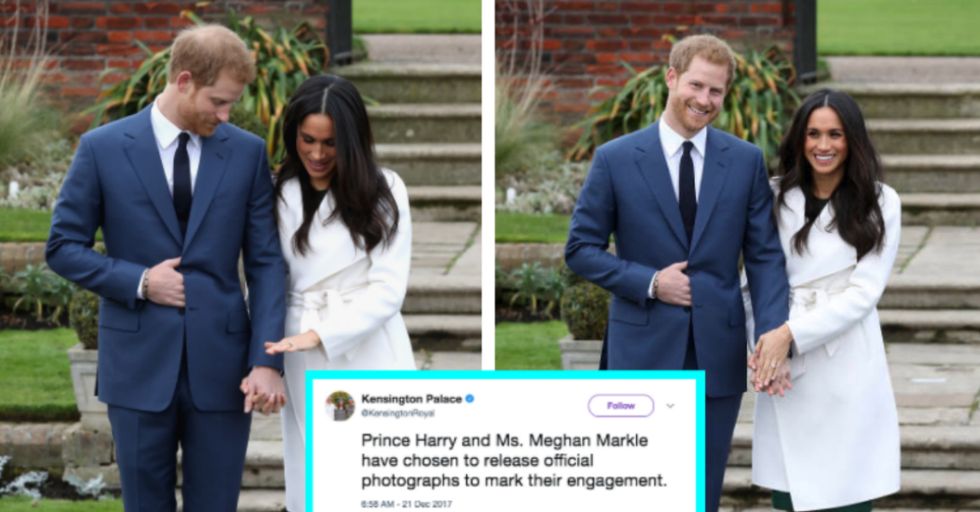 In a year marked with a whole bunch of bad stuff, the entire world was pretty darn excited when it was announced that Prince Harry and Meghan Markle are engaged. Finally, something to look forward to rather than going with our usual move of curling up into a ball and crying and being filled with an overwhelming sense of dread. Everybody loves weddings!

OK, real talk: Every picture of Meghan Markle and Prince Harry is completely adorable and perfect.

Seriously. We dare you to find an image of either of them looking unphotogenic. It can't be done. So you know their engagement photos are going to be incredible.

Even these kind of weird coffee mugs make them look like the most attractive couple on the planet.

How do they do it? For most of us, we kinda figured that we wouldn't get any behind-the-scenes looks into the wedding planning process. We know the official wedding date, but we assumed the couple would keep things pretty hush-hush until they actually tie the not.

But then, something incredible happened:

Excuse us while we fangirl it out for a quick sec.

Yes! Yes! Yes! Love is real and the Royal Wedding is happening and we love love and we love Prince Harry and Meghan Markle!

First, the Palace provided some info on the couple's engagement photographer.

His name is Alexi Lubomirski. We're wondering whether he'll be taking some official wedding photos in addition to the engagement photos. But mostly, we just wanna see those pictures! And here they are...

So. Good. So good. Look at how happy they look! This stunning black-and-white photo prominently features Meghan's engagement ring, which holds a stone from Botswana and two stones from Princess Diana's personal collection. It also features Prince Harry's military-rule-breaking beard and, of course, two of the happiest people in the galaxy.

Here's another photo from the couple's engagement sesh:

This one's clearly a bit more formal. We're loving Prince Harry's dashing navy suit and Ms. Markle's classy beaded top. They're already setting a high bar for their wedding which is sure to be absolutely epic.

Is it weird to download strangers' engagement photos and use them as your own desktop pictures? Asking for a friend.

The world is a happier place because of them. We kinda wish there could be royal engagement photos released every single day ever.

The couple even shared this candid photo:

Jeez louise. Even a candid photo of the two of them looks better than anything we could put together with hours of styling and 12 makeup artists. We wish the couple all the best and can't wait to see more pictures!