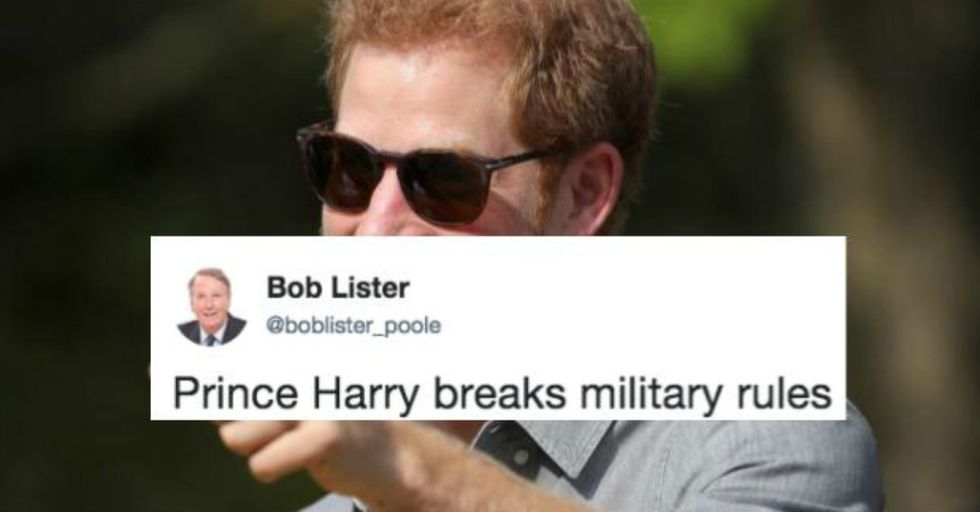 Prince Harry attended a Remembrance Sunday event this past weekend which commemorated the nation's fallen soldiers. He wore his senior Blues and Royals officer uniform while he and the Duke of Cambridge laid wreaths at the memorial.

A source told The Daily Mail that they found his appearance unacceptable.

"He's letting us all down," the source told the Daily Mail. And then, "There's no place for beards in the Queen's cavalry."

They continued, "He should have shaved it off for such an important day." The outrage seems to be coming from an idea of disrespect and principle rather than technicalities.

Beards are, in fact, against military code.

According to the Ministry of Defense, "[Mustaches] are to be trimmed and not below the line of the lower lip. Beards and whiskers may be worn only with authority, and this will usually be granted only on medical or religious grounds, or where tradition permits."

Prince Harry retired from the military in 2015.

Even though Prince Harry is no longer actively serving in the military, his facial hair is controversial because he donned his military uniform for the ceremony.

Some people came to Prince Harry's defense, saying that the rule shouldn't apply to Harry since he is retired from the military.

"I can't believe Prince Harry is getting grief because he wore a beard at the Remembrance Service." One Twitter user wrote. They continued, "The fact that he is retired doesn't seem to make a difference. You'd think Britain would have more to worry about."

Someone else brought up the fact that Prince Phillip, Prince Harry's grandfather, also wore a beard at the same ceremony.

In general, Twitter sways to the opinion that it doesn't matter that Harry wore a beard to the ceremony. What do you think? Was it disrespectful of Harry to wear a beard to a veteran's day event?