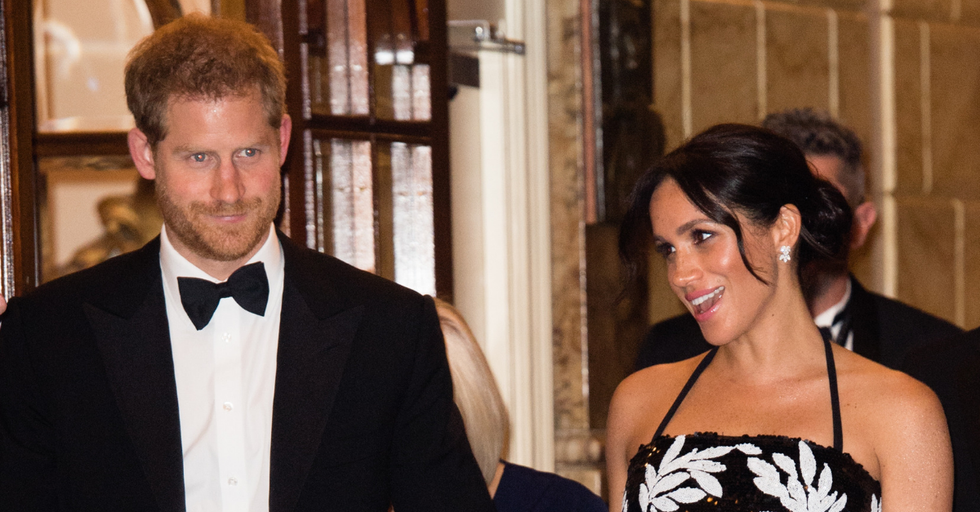 Since their nuptials earlier in the year, Prince Harry and new wife, Meghan Markle, have become a recognized symbol of love and romance.

From the beginning of their relationship to Harry’s wedding jitters at the marriage altar – even hardcore royalists find the couple relatable and adorable. And as is often the tradition for the married royals, Prince Harry and Meghan Markle have recently released their own Christmas card.

The image, a black and white still of the couple in a loving embrace, has been the talk of Twitter, with many fans of the two showing both their admiration and respect for the couple’s love.

Once upon a time there was a prince (who was also a Duke).

For many years, fans of the royal family wondered if Prince Harry would ever find his princess.

He was one of two princes to rule the land.

Especially after the successful marriage between Harry’s brother, Prince William and his beautiful wife, Kate Middleton.

But the Prince never gave up.

However, Harry did eventually find his perfect match.

And he found his princess...in Hollywood of all places.

In June 2016, Harry began a relationship with Suits actress, Meghan Markle. The two were brought together by a mutual friend.

And soon they were to be married.

After meeting Queen Elizabeth, as well as the rest of the royal Windsors,  Harry decided that it was time to propose to his lady love.

And the marriage was seen across the world.

Of course, the news of a royal wedding sent shockwaves around the globe, with many people waiting in anticipation for the big day.

And it was a very big day!

The wedding ceremony was a star-studded affair, and was broadcast all over the world, with the anticipated kiss stealing the show.

The response to Meghan has been positive.

Since the engagement announcement, the world’s reaction to Meghan joining the royal family has been overwhelmingly positive, with many seeing her as a breath of fresh air.

Meghan is not your classic Princess (I mean, Duchess).

Since before meeting Harry, Markle was known for being an outspoken and active feminist, often fighting against Hollywood sexism.

Meghan was also a rare exception in that she had already been married before. Many used this fact to unfairly judge Meghan and compare her to first-time brides Diana and Kate.

Even Meghan’s interracial status became big news upon her royal engagement, as many saw her as a fresh and diverse addition to the royal family, perhaps signifying a more progressive and accepting age in their history.

But whatever the gossip, Meghan and Harry's love does seem incredibly pure.

Meghan will always be one thing, and that is Harry’s true love.

Recently, their love has bloomed into something else.

It was announced that the couple would be expecting their first child in Spring 2019.

And she also gets on great with Will and Kate.

Meghan has also proven popular with her brother and sister-in-law, and is expected to be staying with them and Harry for the festive season.

And of course, there’s the Christmas card.

Every year the royal family releases festive Christmas cards of the different family factions. In the past, Will and Kate’s have been very well received, and even more so with the addition of their adorable children. So of course, Harry and Meghan also had to supply their own festive treat.

And it is stunning.

The card shows a black and white photograph of the couple as they watch a chorus of fireworks, blazing across the sky, while standing on the banks of a lake. The picture was taken on their wedding day by photographer, Chris Allerton.

But there are some saying that the card looks eerily like something from Meghan's past...

As we mentioned, Meghan was married once before to Talent Manager, Trevor Engleson. Some have pointed out the similarity of the royal Christmas card to Trevor and Meghan's wedding Save the Date from 2011. Both are black and white photos, taken from the back, and Meghan's arm does look quite similar in both.

Similarity or not, people are loving how candid the card is.

The image is romantic, stylish and beautiful, and it has already received adoration and praise from the couple’s loyal fans.

So of course, these fans decided to take to Twitter to share their opinions on the romantic photo.

Like this tweet, where the couple are praised for sticking to tradition. They are the Duke and Duchess of Sussex after all.

Some couldn't wait for another addition to the photo.

This fan can't wait for the royal couple to have their first child, which I'm sure will make an even cuter Christmas card next year.

Some couldn't contain their admiration.

Since getting engaged, Harry and Meghan have been seen as a true symbolic of love and romance, and this Christmas card has only helped to further prove that.

Some wished the couple festive happiness.

Many of the couple's fans even wished them a Merry Christmas, showing just how many people respect and admire this relationship.

A strong future ahead of them.

Many Twitter users also believed that the photograph showed how strong the couple's love was, and how this would give them a strong marriage, and future, together.

Some even conveyed their excitement and happiness just through a few simple words.

Of course, some people didn't see the romantic side to the picture.

As is always the case with Twitter, there were a fare share of people who didn't like the photo, calling it alienating and detached from the viewer.

But they were often put in their place.

However, many legions of royalists stood up for the picture, demonstrating how much they care for the newly wedded couple. You don't want to cross a Harry and Meghan fan!

This fan, and many others, wanted the couple to show off the Duchess's baby bump a bit more. That baby is going to blow up the internet when it's born!

Although some criticised the photo for being too detached for a festive greeting, some thought that was instead intimate, perfectly capturing a tender moment between the loving couple.

But it seems that the hand hold is the main star.

Although the picture is a beautifully produced work of photography, people seem to love the hand hold the most. Seeing is as a symbol of the couple's loving bond.

They will always have the love of their fans.

But no matter what, we know that this royal couple will always have the love and support of their fans. Who will be by their sides through every stage of their relationship.