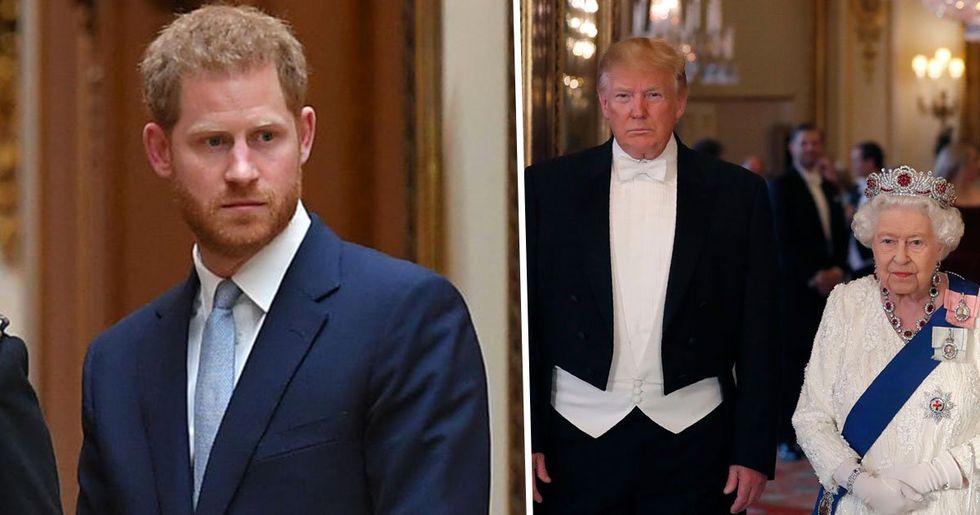 It seems like Trump's state visit to the UK has been causing major ruptions yet again.

In 2017, over one million Brits signed a petition to prevent the President's state visit to the UK when his first trip was first in talks, and true to the message in the petition, since his arrival yesterday, Trump hasn't exactly been welcomed with open arms by the public.

Anti-Trump protests have been popping up all over the country and a giant penis was even ready to greet Trump as he landed in the UK (yes, that really did happen).

But, the visit has also been causing a stir inside the Palace walls.

Last week, it was announced that Meghan Markle wouldn't be attending any of the events while Trump makes his three-day visit across the Atlantic, and now her husband, Prince Harry, has found himself in a tricky position too.

Meghan Markle is abstaining from meeting with the President during his three-day state visit.

ET reported the news last week that the Duchess will be skipping the scheduled events taking place from June 3rd to 5th, during Trump's visit to the UK. But it didn't exactly come as a surprise...

Meghan is still on maternity leave from royal business after the birth of her son, Archie.

Meghan gave birth to baby Archie on May 6, but, apart from the presentation of the baby two days later, she is yet to attend any royal events.

Despite being on maternity leave, there may be another big reason that the Duchess isn't attending the events...

Meghan Markle has previously criticized Trump for his politics and behavior. While appearing on the US talk show, The Nightly Show with Larry Wilmore in 2016,  she called Trump “misogynistic" and “divisive," in reference to his comments and actions.

She even claimed that, if Trump were elected, she would stay in Canada.

Before her engagement to Prince Harry, Meghan was working in Canada on her hit-TV show, Suits. In the build-up to the 2016 presidential election, the then-actress insisted that, if Trump won, she would stay in Canada.

The Palace has not made a statement about why Meghan is declining to attend the engagements.

While it's clear that Meghan is not attending any of the state visit events, the Royal Family have not issued a statement explaining why.

It seems that the public are with Meghan on this one...

When the state visit kicked off on Monday, the British public flooded London with anti-Trump protests.

The protests have been making it clear how many people feel about his visit.

These protesters set up outside Buckingham Palace to express their hatred towards the President.

Though his trip to the UK last year wasn't an "official" state visit, the President still managed to get himself caught in backlash. Not only did Trump keep the Queen waiting for him, he also didn’t bow to her, and he turned his back to her, pretty much breaking protocol at every opportunity.

The president was greeted with several protesters and mocking costumes.

During Trump's unofficial pit-stop in the UK last year, he was met with thousands of protesters, some of whom sported particularly funny costumes and signs.

Meghan's absence to this week's state visit wouldn't be the first time that she's bucked tradition...

From shutting her own car door (shock horror), to walking herself down the aisle, Meghan has made it clear from the start that she marches to the beat of her own drum. So her decision to decline to attend the state visit events isn't exactly a shock.

Trump also isn't one for tradition, but not in quite the same way.

Trump's antics have usually seen him breaking traditions to do with justice, diplomacy, and decency. From refusing to shake the Chancellor of Germany, Angela Merkel's, hand, to throwing rolls of paper towels at a group of Puerto Ricans following Hurricane Maria, the President is frequently slammed for his behavior.

He's also the first president to be laughed at while speaking at the UN.

After the President bragged about the state of the US during a speech at the UN, there were audible laughs coming from the room.

In usual Trump-style, the President had something to say about Meghan Markle...

In a recent interview with The Sun, Trump branded Meghan as "nasty" in response to the comments that she made about him in 2016 on US talk show, The Nightly Show with Larry Wilmore.

When the newspaper asked the President about Meghan's previous comments, Trump insisted that it was the first time that he’d heard them.

He also claimed to have no idea that he wouldn't be meeting Meghan during his state visit.

During the interview, Trump revealed that he had no idea that he wouldn’t be meeting Meghan on his three-day state visit to the UK. “I didn’t know that. I hope she is OK," he said.

He then tried to say that this was fake news...

Using his go-to phrase, Trump accused The Sun article of being part of the "fake news media".

However, The Sun published the recording of the interview.

Trump got well and truly caught out when the newspaper published the recording of the interview, confirming Trump's comment referencing Meghan, to be true.

So, given their history, people now think that Meghan and Trump are being kept apart to avoid an embarrassing confrontation.

Now that Trump has reacted to Meghan's comments, people think that this is the reason that the Duchess has opted out of the state visit events.

Now it seems like Prince Harry has been caught in the middle of the pair.

In light of Trump's comments about wife, Prince Harry found himself in a tricky position yesterday as the US President visited the royals.

As the state visit gets truly underway, Harry seems to be doing all that he can to avoid the President.

Prince Harry, who was also at the private lunch, noticeably hung back. He walked in with Ivanka (was he supposed to… https://t.co/ZfgZtNvCAo
— Emily Andrews (@Emily Andrews)1559569613.0

As the US leader, accompanied by First Lady, Melania Trump, viewed artefacts in the Buckingham Palace Picture Gallery, Harry appeared to be avoiding Trump, standing at the back of the room for the entire meeting.

An onlooker at the gallery said that Harry looked totally "uninterested" during the meeting.

Despite the event being very secretive, with no press allowed, according to The Mirror, the source said that Harry "stayed at the back of the room for the entire time, rocking back on his heels looking totally uninterested."

The Prince was spotted talking to another member of the Trump family...

Harry was seen speaking to the President's daughter, Ivanka Trump, at the event - but still steered clear of the leader himself.

The Prince may have attended the gallery meeting, but he was quick to avoid the President after...

While the Prince did attend a lunch with the President before the gallery trip, he was absent for the banquet at the Palace later. However, Kate Middleton and Prince William, the Duke and Duchess of Cambridge, did attend the event.

Harry's reluctance to encounter the US leader is definitely understandable...

With Meghan Markle and Trump not exactly being the best of friends, it's not surprising that Harry wasn't thrilled to meet the President - after all, Trump did call the Duchess nasty.

It seems like a lot of people are on Harry and Meghan's side when it comes to Trump.

The internet has been going crazy with people defending Meghan's decision to not attend, as well as Harry's choice to snub the leader.

Twitter has been full of reactions to the news...

This Twitter-user said that they would have "slapped" Trump if they were Harry...

After an account tweeted about how the Royal Family are embracing Trump, another user was quick to correct them...

Another user was quick to jump in to point out that Prince Harry is simply fulfilling his royal duties by turning up to the gallery meeting.

Many are also pointing out the stark contrast between Obama's state visit to the UK and Trump's...

"Does anyone else get the impression that T isn't welcome in the UK?,"  one Twitter-user wrote.

So, with both Meghan and Harry snubbing the President... what's next on the agenda?

The UK and US leaders are holding talks this afternoon, followed by a news conference. A dinner with British political leaders, including Boris Johnson, might also be on the cards.

The President will be returning to the US on Wednesday.

The state visit will be coming to an end tomorrow, to many protesters' and, it seems, certain Royal Family member's, relief.