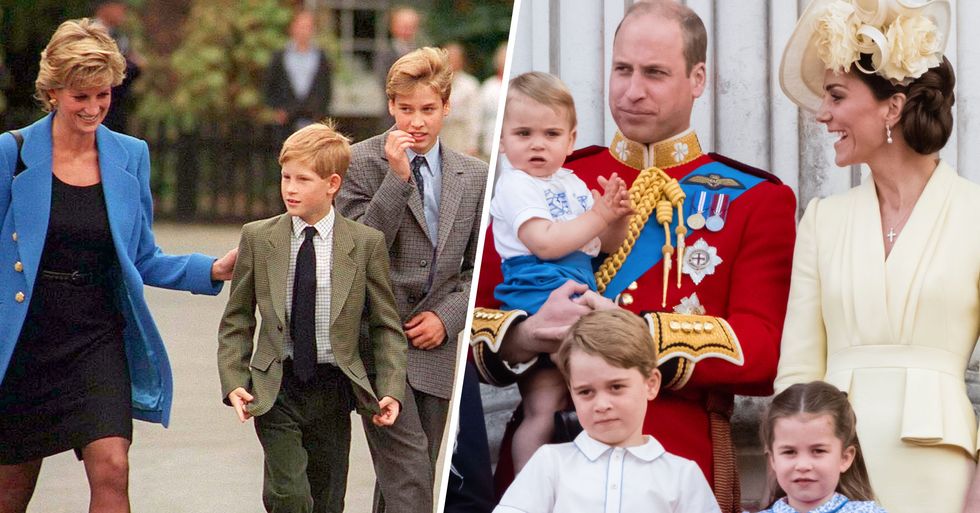 Prince William Says Diana Would Have Been a 'Nightmare' Grandma

Princess Diana was truly one of a kind.

She was the "People's Princess", and there hasn't been anybody quite like her since her tragic death in 1997.

Diana's memory is still fondly remembered to this very day, and her son's William and Harry consistently pay tribute to their mom.

But William has ruffled some feathers recently after saying she would have been a "nightmare" grandma.

She was a member of the aristocracy, but she still had a fairly normal childhood...

And she was often described as shy, kind, and was more creative than academically intelligent. She worked a range of fairly regular jobs in her youth, including working as a teacher at a preschool.

As a teenager, Diana struggled to find her place in the world...

Here's a little known fact about the pair's relationship... before dating Diana, Charles had actually been dating her big sister, Sarah. Diana and Charles's relationship was pretty formal in the beginning, with her reportedly calling him "sir" throughout their courtship.

And after meeting only twelve times, Charles proposed to Diana. The pair announced their engagement in February 1981 and during the broadcast, many remember Charles being oddly reluctant to say he was in love with Diana.

Soon after, the pair welcomed a baby into the world...

The two announced their pregnancy just four months after tying the knot, and, on June 21st of 1982, they welcomed Prince William into the world- the future King of England.

And Prince Harry was born on 15th September 1984. However, although they were keeping up appearances, all wasn't quite so sunny in the relationship between Charles and Diana.

But in spite of the neglect Diana experienced during her marriage...

One thing that she was absolutely dedicated to was being a mother. She had strong ideas about how she wanted her kids to be raised, often giving them more freedom and normality than traditional royal heirs.

She also made world news when she shook hands with an AIDS sufferer...

Unlike the typical Royal wife, Diana was dead set on doing work for herself and for the betterment of the world, earning her the nickname the "People's Princess" for her kindness to others.

According to many sources, Diana was aware of the affair, and it was something that continually made her feel inadequate and unconfident throughout her marriage - resulting in an array of mental health problems.

And, by 1997, Diana was dating business mogul and son of Harrods owner, Dodi Fayed. Many speculated that the relationship was controversial to the royal family due to the fact that Fayed was a Muslim, but regardless of the snobbery, Diana seemed happier than ever with her new partner.

It garnered viewing figures of over thirty-two million in the U.K., and millions of others worldwide, breaking all viewing records up to that point.

Because, alongside the world losing a real force for good, 2 young boys were left without their mother.

Prince William and Prince Harry have never forgotten their mother...

And her tragic death only made them admire her more and become more like her.

Over the years, the princes have ensured Diana's memory hasn't been forgotten...

Prince William featured a TV documentary back in 2017...

And he spoke candidly of Diana and how it pains him that she will never meet her grandchildren.

William has ensured his children know all about their grandma.

"It’s hard because obviously Catherine didn’t know her, so she cannot really provide that—that level of detail," he said. “So, I do [when] regularly putting George or Charlotte to bed, talk about her and just try and remind them that there are two grandmothers, there were two grandmothers in their lives, and so it’s important that they know who she was and that she existed."

But when he was asked about what type of grandma Diana would be...

He replied with, "nightmarish."

William said this as a joke, and he went on to say, "She’d be a nightmare grandmother, an absolute nightmare." "She’d love the children to bits, but she’d be an absolute nightmare. She’d come and go and she’d come in probably at bath time, cause an amazing amount of scene, bubbles everywhere, bathwater all over the place and—and then leave."

She would have been the perfect grandma.

Keep scrolling to see all of the times that Kate Middleton twinned perfectly with Princess Diana...