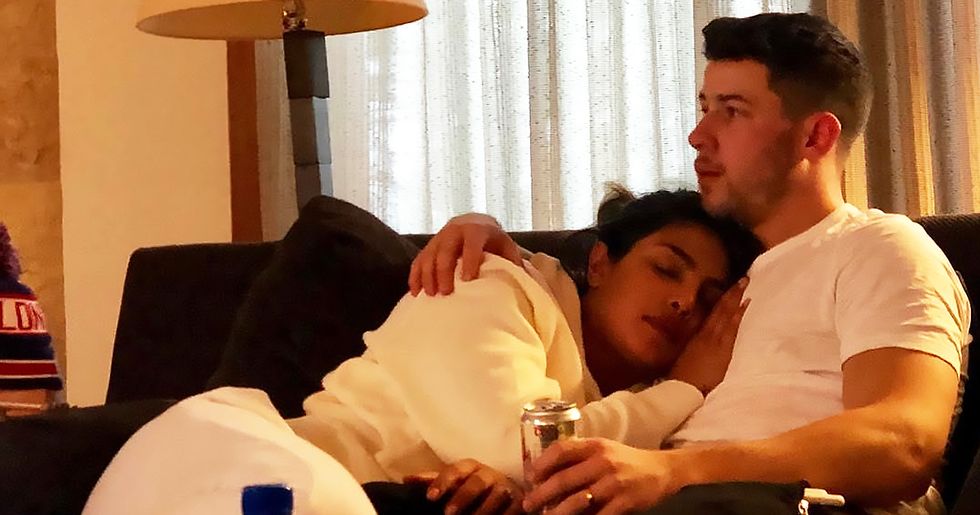 Priyanka Chopra and Nick Jonas are pretty much relationship goals. The internet has been raving about them since the pair went public in June of 2018, and shows no signs of stopping! Meanwhile, the couple frequently posts cute pictures of each other on Instagram. So, it's pretty easy to follow their relationship.

The Chopra-Jonas photo currently grabbing everyone's attention comes with a little mystery. The couple is still in the honeymoon phase of their marriage, and they're not shy about their affection! So they posted a cuddly photo to Instagram, and everyone just has one question.

It's cute and all, and pretty intimate, but who was in the room taking that picture? Of course, there's more than one theory here. Check out what everyone is saying about this photo!

So, Priyanka Chopra and Nick Jonas are super cute.

And they post plenty of pictures to prove it!

They tied the knot last December.

And yes, the wedding looked just as gorgeous as the couple!

A heartfelt thank you to our Hon'ble Prime Minister Shri @narendramodi ji for gracing us with your presence. Touche… https://t.co/rBVlLdaGua
— PRIYANKA (@PRIYANKA)1544003165.0

Seriously, even the Prime Minister of India went and wished them well.

It was a fairly quick engagement.

The couple had only been dating for two months before getting engaged and then married four months after that. But according to Nick, when you know, you know.

Before dating, they'd been flirting back and forth for a while.

Just look at this comment Nick left on one of Priyanka's Instagram photos. They leave adorable lovey comments on each other's stuff a lot.

They actually started talking in 2016.

It started as a friendly (and flirty) texting relationship after Nick reached out to Priyanka on social media.

They met at the Vanity Fair Oscars party and later went to the Met Gala together as Ralph Lauren's guests.

When they first met in person, Nick got down on a knee.

Seeing Priyanka at the Oscars party, Nick put down his drink, got down on his knee in front of a crowd of people, and said, "You’re real. Where have you been all my life?" How's that for a first in-person introduction?

And they still weren't dating yet.

They kept in touch after the Met Gala, but nothing concrete happened in terms of their relationship until 2018.

They made their romance Instagram-official in June 2018.

And, of course, the internet blew up!

They met each other's families the same month.

Nick brought Priyanka to his cousin's wedding that June, and later in the month he flew to India and met her family.

Priyanka told Vogue about the moment she realized her relationship was something special.

The pair were out on a date when Nick said, “I love the way you look at the world. I love the drive you have." “As a girl, I’ve never had a guy tell me, ‘I like your ambition,’ " Chopra told Vogue. “It’s always been the opposite."

They got engaged on July 27th.

They each posted this same picture on their respective Instagram pages as their engagement announcement in August.

Over the next few months, they were just generally being cute.

The couple celebrated their engagement, and went out on cute double dates like this one with Joe Jonas and his fiancé Sophie Turner!

There were a few pre-wedding rituals.

This started off with the Mehendi, which according to Chopra is "an important part of the pre-wedding rituals for the girl."

After that was the Sangeet, or "musical evening" with the two families. And boy, did they all bring it!

And finally, they got married.

The December 1st ceremonies were lavish and full of love. And yes, I did say "ceremonies," because there were two. One for each of their respective religions.

So that's where we are in the timeline of Priyanka and Nick.

It's a whirlwind, and we love following every stage of it!

So just a day ago, Priyanka posted this photo to Instagram.

And while it's super sweet, it does beg a couple of questions.

Hey, it's a fair question!

Huh. I've never heard of anyone but the President having an around-the-clock photographer!

Some people just appreciated the gift.

We're getting cute pictures; why question it?

Uh oh. Is this a fly on the wall situation?

Now *that* sounds like the beginning of a horror movie.

Kinda funny when you make a meme out of it, though.

Well, security cameras are a thing.

Some people looked at the situation more rationally.

@sidin There are things such as tripods and delayed trigger remotes that help you take family photos without being… https://t.co/lyKa3vokJ5
— Prosenjit Datta (@Prosenjit Datta)1549261754.0

Very true. It's not that hard to set a timer and pose for a picture these days.

@ProsaicView @sidin There have been automated cameras....now there are smart cameras that can be remotely controlle… https://t.co/qh19aAjGzk
— D Prasanth Nair (@D Prasanth Nair)1549264282.0

Honestly, there are a bunch of ways that this photo could have been taken. And as long as Priyanka is posting it, I think we can rule out an unseen guest!

Plenty of people had a different reaction, though.

Instead of coming up with explanations, they just cried over the Nickyanka magic. Which is also fair.

So they definitely had friends over. One of them may have taken the shot!

At the end of the day, we still have a happy couple.

And that's what is really important, right? What do you think of the mysterious photo? Share this story with your friends and decide together!