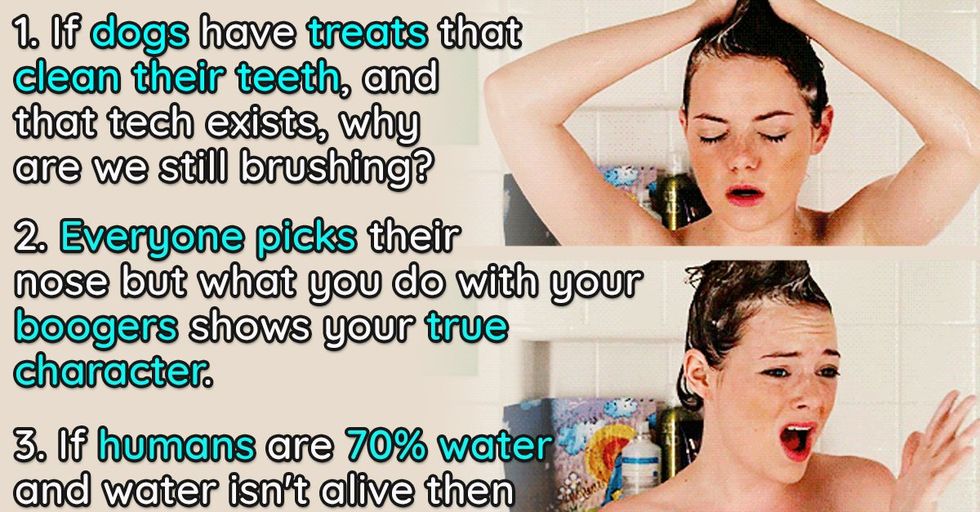 I don't know what it is about the shower, but it's a haven of brilliance. Chances are we've all had an epiphany or two while scrubbing our bodies, maybe about your job or your relationship or even about life in general.

There's a whole Subreddit dedicated to these "Shower Thoughts," these little everyday discoveries that we all make — here are the best ones, the ones that will make you go, "Whatttttt?!" and "Oh yeah!" and "I never thought about it quite like that!"

You can say "Happy Belated Birthday" to anyone at any point in time and it makes sense. –tyce_tyce_baby

Get it? Because every day you are alive is a day after your birth day (the day you were born)!

Dogs in the Wind

Dogs get mad when you blow in their faces but immediately stick their head out of the window in a car. –MoistDinosaur

This one just straight up blew my mind. But the thing is...
It's so funny how mad my dog gets when I blow in his face, and I would not want him to have any other reaction.

It's a sad truth about America that we succumb to some very dumb fads. To be fair, the stringy things on a banana are super disgusting.

If a priest was ever singing along to Africa by Toto, they really would be blessing the rains down in Africa. –NoeticQuality

Priests should really get it together and realize the scope of their power.

Left handed people have to spend their whole lives shaking with their less preferred hand. –brownomics

If dogs have treats that clean their teeth, and that tech exists, why are we still brushing? –Hopeless_Grasshopper

This is maybe the most brilliant shower thought and the worst problem we as a society have yet to fix. Imagine instead of having to brush your teeth you could just eat a cookie. I want to live in that world.

How many more oranges would you have eaten in your life if you did not have to peel them? –peszneck

The answer: SO MANY.

If humans are 70% water and water isn't alive then humans are always 70% dead inside. –QmanVader

These days it's feeling like I'm more like 80-85 percent dead inside what with Trump and all that, but this is some epiphany to have. Of course, if water isn't alive, then it can't die, so we're not really 70 percent dead inside... We're just 70 percent water. But who am I to burst a bubble?