Proof That Dogs Are Man's Best Friend, but Not Man's Smartest Friend | 22 Words 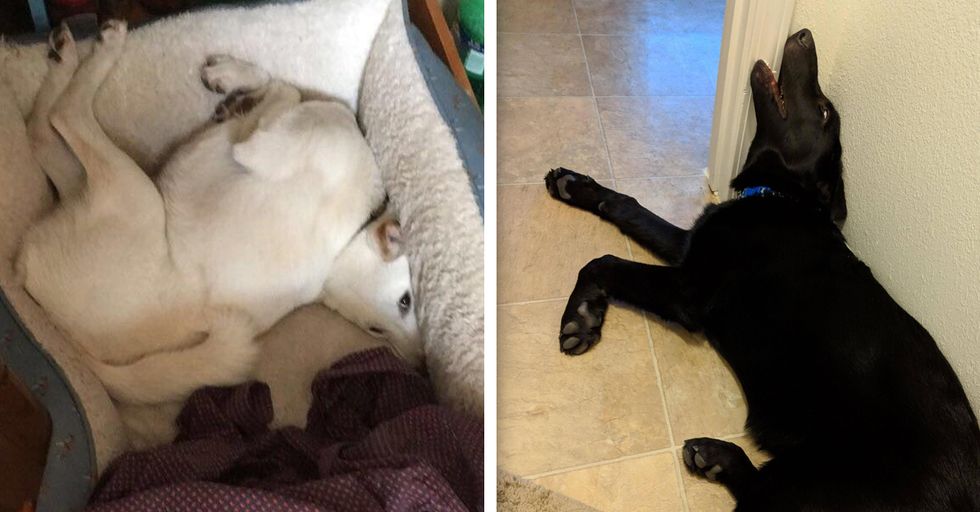 Proof That Dogs Are Man's Best Friend, but Not Man's Smartest Friend

We can all agree that dogs are wonderful. That's just one of The Great Truths of Life.

But as wonderful as dogs are, sometimes...they're just a little bit dumb. And other times they are really, really dumb.

I love my dog Archie more than most living things on the planet. I think he's super smart and very talented and basically, the best dog that has ever existed, but I can also admit that he is a total doofus sometimes. For instance, as I began writing this intro, Archie started whining from his (very cozy) spot under the blanket on my couch. He then crawled out from under the blanket, realized that literally nothing was happening, looked at me disapprovingly (as though I had made him leave his nap spot), and then turned around and went straight back to napping under the blanket. Why did he do that? No idea. As I said, he's a doofus.

At least he's in good company, though. These dogs are also total doofuses (but still amazing and pretty much perfect and I love them all so much).

Why spend the money on a fancy bed for your pup? Apparently, the toilet hookup will do just fine!

I guess as long as he's at least 3 years old (which is 21 in dog years), he's allowed to be there. Plus, he looks as though he's having a great time!

Is that a treat I smell?

If my dog ever started making this face, I wouldn't know whether to be entertained or afraid. I'd definitely give him a treat, though.

Living with dogs means introducing a bunch of sudden crashing sounds to your life. It's the sudden silences you've really got to worry about, though.

I can understand being startled by an automatic window once and going into chomp mode. But to keep it up for eight years? That's dedication!

And kick! And kick!

This dog has trained with world-renowned choreographers. It's destined for stardom!

Believe it or not, this dog is sleeping.

You know what they say. The secret to getting a good night's sleep is to cram yourself into a corner and keep your eyes open.

Oh, whoops! This was supposed to be a picture of a dog. Not a squirrel. Not sure how that happened. Sorry about that!

Every year. EVERY YEAR. Charlie always thinks the clementines are balls and just stares waiting for you to throw… https://t.co/V7tutEfvmB
— Ben Hyde-Hart (@Ben Hyde-Hart)1482503936.0

I'm just impressed that Charlie waits so patiently for someone to throw him a "ball." I'd be tempted to give him one just to see what happens.

This dog may have forgotten how to dog but he certainly remembered how to human.

Well, I've just canceled the rest of my plans for the day. I need to watch this GIF for the next four hours. At least.

Get you a friend that will snuggle you even when you look like this. That's true friendship right there.

I don't know what this pup is thinking about, but it seems to be pretty deep stuff. It's probably best to leave him to it. He might be the next Francis Beggin Strips.

What a lovely picture!

Leave it to your dog to ruin a perfectly decent picture. And by "ruin," I of course, mean "make it 1000 times better."

Gotta keep that little critter cozy! Am I the only one who really wants to see him walk while wearing that thing?

Climbing into the walk-in shower isn't that impressive. Closing the door behind you, on the other hand, is pretty darn amazing.

I assume they're watching a movie about a family who adopts a cat. That's the only reasonable explanation.

He forgot how to dog. But remembered how to fish.

Time to feed me!

I am simultaneously intimidated and trying not to laugh.

Is this dog meditating?

"As we come to the end of our meditation session, I leave you with one question to ponder: Who is a good boy?"

I don't know how this dog got into this position, but I am so, so happy that they did. It's adorable and confusing. But mostly adorable.

The creature from the deep!

I don't know how it happens, but dogs are capable of both being the cutest creatures on the planet and the most terrifying animals to appear in photos.

Oh, look! He is uncomfortable with his situation but too lazy to put in minimal effort to change the said situation! It's me as a dog!

There's something up there.

What? You mean you don't jump up and down every time you see a kitchen sink? Maybe you're the weird one.

There's no way this is comfortable.

This looks like of like a build-it-yourself dog kit you might get from Ikea. All the pieces are there. They're just not in the right spot yet.

Think I can pull off this move next time someone asks me for a high five? I'm gonna give it a try.

A calm night by the fire.