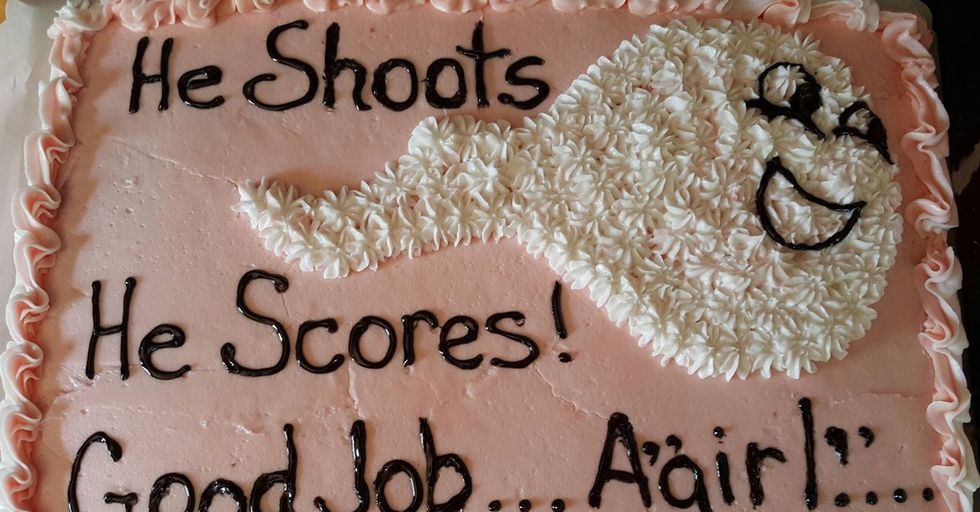 Baby Showers Should Not Be a Thing and Here's Why

Hi, hello there. Please, have a seat.

I'm guessing you clicked on the headline for one of two reasons. Either you loathe baby showers just as much as I do and you're looking for validation for your unpopular opinion, or you are deeply offended that anyone could possibly hate a party that celebrates the Miracle of Life™ and you just had to read this article before commenting on it to say what a horrible person I am. Regardless of what brought you here, welcome.

I'm actually pretty sure that over the course of the next few minutes, I'll convince you that baby showers are, in fact, the worst. I know, I know. You might think that's absolutely bonkers and also super mean. I hear you.

Before I get started sharing how awful baby showers are, I want to set a few things straight.

First of all, I think babies are great.

They're adorable! Their clothes are cute! They smell good (when they have a fresh diaper)!

Anyone who tries to tell you that a baby cuddling a puppy isn't adorable is either a very broken individual, or a liar.

Just look at this adorable hiccup!

Say it with me: Awwwww! So yeah. I think babies are great. I love snuggling them and watching them learn and grow.

But I hate baby showers.

And I do mean hate. Now. I also recognize that baby showers serve a very useful purpose. I think the idea of a group of people coming together to support new parents is honestly one of the loveliest things our society does. I am all for the sense of community that springs up when someone announces they are bringing a baby into the world. But showers? No, thank you.

Let's start with the fact that all of them seem to have a "theme" these days.

If you ask me, the "theme" of a baby shower should be "Let's help so-and-so get the stuff they need for their baby." But no. Instead, you have to have some kind of pun involved. I love puns! But we don't need them for parties. Let's Taco 'Bout a Baby? Let's just eat tacos and also watch an expectant mother open presents. You don't need an excuse for tacos. Just have tacos.

I assume this baby is named Chase.

Chase is a fine name. But having a bank-themed baby shower is super weird. Right? Tell me I'm not alone on this one.

And then there's the food.

Sometimes, the food is shaped like a baby. And people are expected to eat it. Does anyone else find this even slightly awkward?

There are also sometimes foods that are, uh, really weirdly sexual in nature.

Look. Maybe I'm a prude, but I just don't think it's necessary to or funny or cool to have a bunch of frosting sperm (!) on cupcakes that people are expected to eat.

But do we need to actively acknowledge the biological process when it comes to the food? Is it really necessary to eat sperm made out of frosting to welcome a new baby into the world? I don't think so.

Some cakes get a little more graphic than others.

If I ever saw a cake like this at a baby shower, I think I would have a hard time eating anything.

People often want to see the ultrasound pictures of your little one, so I can kind of see how you might think it's a good idea to put said pictures on your cake. But just consider for a quick sec the optics of slicing this cake into several pieces and then serving it to people. To eat.

And if eating an ultrasound picture doesn't strike you as weird...

Maybe you've seen this at a baby shower:

The idea is that you freeze plastic babies in ice cube trays and make a game out of it. Now, you might already find that bizarre (I know I do). But maybe you think it's cute.

If it is cute, it gets significantly less cute as the ice cube melts:

Not so cute anymore, is it?

In fact, the end result is actually pretty darn disturbing.

Maybe it'd be better if they floated face-up. But it wouldn't be that much better.

Here's another bizarre thing that happens at showers:

Once again: You don't need a baby-themed excuse to have beer at a baby shower. Just serve beer. In cans and bottles. That's all you have to do.

But the worst part is the games.

I have been to many baby showers. I have hosted a handful of baby showers. The games. They kill me. The one pictured above is, in my personal opinion, the absolute worst one. The idea is that you put candy bars in diapers, let them melt a little bit, and then have people try to identify what kind of candy bar was put in the diaper. You know. Because it looks like poop. And poop is so fun.

Don't worry; you can also use the diapers for diaper pong.

Now, I don't really understand why you need games at all. Everyone is already going to spend ~2 hours watching presents be opened. Do we really need to prolong the event?

I have been to a few baby showers where the "game" is to not cross your legs.

Because, apparently, being uncomfortable with the floating ice cube babies, sperm cakes, and poop games just isn't enough. You may as well add physical discomfort to the list.

Almost every shower I've been to has had the "don't say the word 'baby'" game.

And I use the word "game" loosely here. If you say the word "baby," you have to give up a clothespin (or safety pin, or pacifier necklace, or some other dumb thing) and you lose your chance at winning a prize.

As soon as I see this game is being played, this is me:

I just say "baby" to get it out of the way. 'Cause guess what? I'm there to celebrate a baby. I'm gonna say baby. And I don't care if I don't get to bring home a candle or lotion set you got on sale from Bath and Body Works.

This is a new one:

One part of me thinks this is actually pretty hilarious. The other part of me is cringing at how uncomfortable I would be to play this game in the presence of my grandmothers.

Nothing's more fun than getting all up in the business of the expectant mother's older sister and crafting a gigantic toilet paper diaper for her! And I hope you didn't say "baby" while you were making the diaper!

This "game" involves guessing how big around the expectant mother's belly is.

What a great way to make the mom even more self-conscious about her growing and changing body that is literally providing life to her future child!

If the dad is at the party, you can bet he's going to be made fun of.

Most of my issues with baby showers stem from them being kinda gross and/or obnoxious, but the ways I've seen dads treated at showers is actually legitimately disturbing. Everyone makes fun of how dad doesn't know how to change a diaper (or make a bottle, or burp a baby, or literally anything having to do with childcare), and I think that's both super offensive and also a way of putting more emotional labor on the expectant mother, who is most likely already going to be dealing with plenty of it.

Again, I don't think I'm a huge prude, but I'd rather not envision my friends doin' the deed at their baby shower. Maybe I'm the weird one, though.

At the baby showers I've been to, there have always been weird and gross elbow-nudging comments about how the baby was made via sexual intercourse. And like, yeah, I get it, Aunt Brenda, but can we not?!

Decorating onesies is pretty much my favorite baby shower activity.

I'm not a parent, but I would 100 percent love a onesie like this one for my kid. Just saying.

Finally, we have to talk about the cost.

Not only do you have to give up several hours for this lame and uncomfortable party where you can't cross your legs in the hopes of maybe bringing home some lotion; you actually pay for the experience. Once again, I have no problem getting gifts and supplies for expectant parents. It's just kind of the icing on the cake. The sperm cake. But once the baby shower is over, you can at least rest assured that your social obligations are fulfilled. Most people typically only have a shower for their first pregnancy (unless they have a "baby sprinkle," which, don't even get me started...), so once you've been to your friend's shower, you probably won't have to go to another one for them. In fact, you can totally relax...

After that, it's time for the kid's first birthday party. But I'll save that for another article. So, are you convinced? Should we put an end to the stereotypical baby shower? What's the worst thing you've ever seen at a shower? The best? Share this with someone who also hates baby showers. Or, if you're feeling especially brave, share it with parents-to-be!