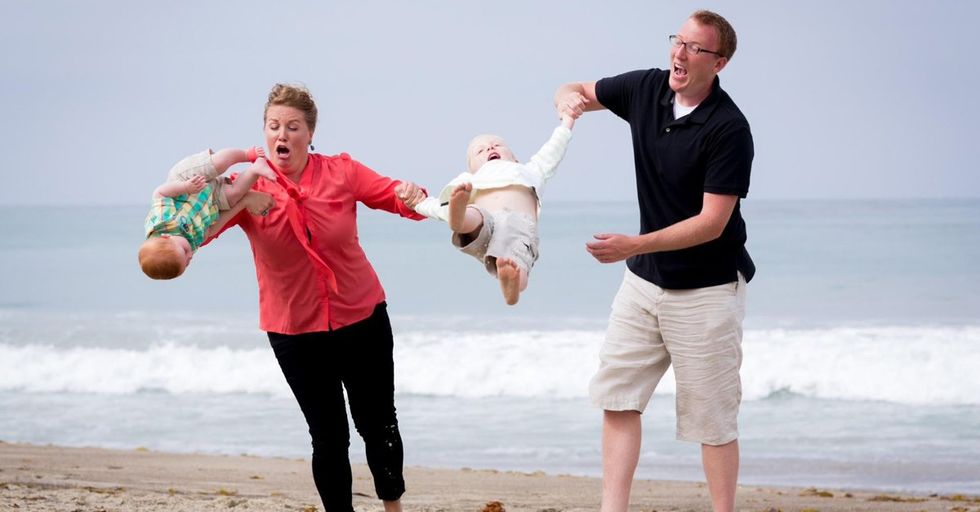 The beach is a wonderful place.

The sun in the sky! The wind in your hair! The sand between your toes!

There are few things more relaxing than reading a book while laying on the sand and listening to the waves crash nearby. Or falling asleep while trying to read a book, anyway.

Of course, spending time at the beach isn't always low-key or relaxing. When you mix humans with nature, you're bound to get some hilarious results. The following pictures were taken on various beaches around the world, and they have one major thing in common: They're funny!

From falling in the sand to hilarious signs put up on the premises, here are some of our favorite funny beach pics! We recommend you don't try to recreate them next time you head to the beach!

Well, that's a new technique for catching a football. I can't say I really recommend it.

Sorry, did you say she was trying to save the turtles or trying to give them the scare of a lifetime? It looks like she's doing the latter.

Were you going to eat that ice cream? You know what? You're taking too long. I'll help.

I have no idea how that dog got into this position, but I am so, so glad that someone was there to document it.

Look, all parents make mistakes. Most of them are just lucky enough to not have those mistakes documented by a family photographer.

First time at the beach.

And that was when little Caleb decided that he hated the beach and would never return.

There is something very unsettling about this image. (If this doesn't freak you out, just wait until we get to the one with the starfish.)

To be fair, this is almost exactly the same reaction I would have to seeing a crab on the beach. I can't fault this dog.

I have so many questions about this situation. Why was there a camera here? Why did they think eating on the beach was a good idea? How can I get this picture printed on a large canvas to hang in my home?

Not technically a beach, but...

I admire this person's ingenuity. I doubt the kids playing on the playground will, though.

OK, this is adorable.

Unfortunately, you didn't get a cute picture of the two of you. On the bright side, you got a much better picture.

This clearly took a lot of effort, and I am confident in saying that all the work was 100 percent worth it. I want a beach couch!

Anyone who has attempted running down a sand dune knows this feeling. It's not a good feeling.

This poor guy fell asleep holding a big bottle of... Sunscreen. It was definitely sunscreen.

Here's that starfish one I warned you about:

Pretty awful, huh? Don't worry. The rest of these aren't nearly as disturbing.

Say what you will, but this hotel clearly has its priorities straight. I think that's pretty admirable.

Everyone loves horseback riding on the beach. Although I don't think most people had this arrangement in mind.

Heads up: The beach signs in Singapore are great.

Dang! All I wanted to do was fly a kite!

I never knew that I wanted to go to a Singaporean beach until today, but now it is pretty much the only thing I want to do.

Major props to the guy in the water. He made this photo approximately 110 percent better.

Feet on the beach.

We've all taken a "feet in the sand" photo at the beach, right? These people took things to the next level.

When eating on the beach, you don't have time to take a picture of your food. If you hesitate even a moment, your snack is lost forever.

I've never seen an elephant at the beach when I've been there, but I'm going to keep an eye out from now on. I wouldn't want to miss something as cute and hilarious as this!

The "This isn't Jersey Shore" fine print at the bottom is obviously the best part. I'm going to assume this sign is also on a beach in Singapore. It's that good.

Some people build sandcastles at the beach. Others read a book. The true heroes take pictures like this one.

This is slightly horrifying, but also pretty cute.

Ready for the beach!

I believe this is what is known as a seahorse. Correct me if I'm wrong. Share this with someone who loves the beach!