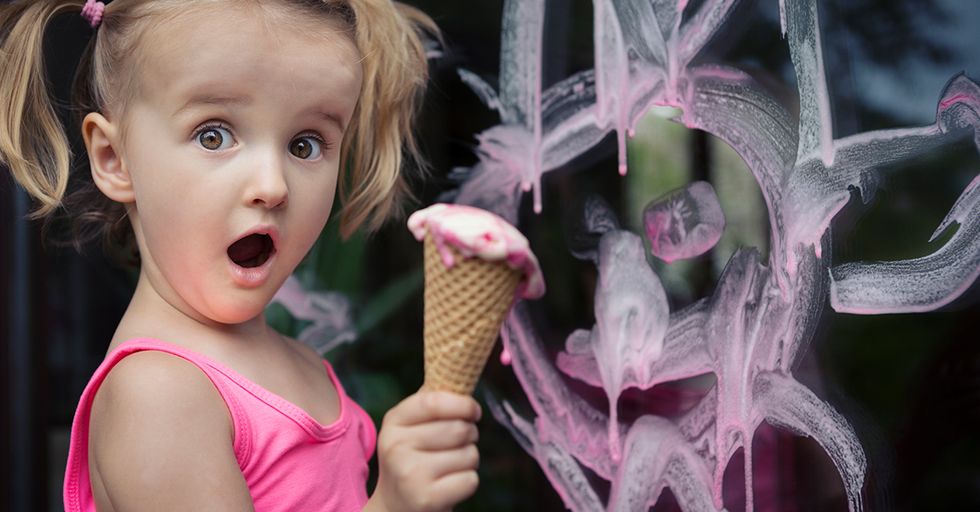 Most of the pictures you see of kids on the Internet are super charming and lovely. They're either giving up their allowance to buy their siblings a gift, donating their toys to someone in need, starting a lemonade stand to raise money for cancer research — you know, all that cute, mushy stuff.

Well, I'm here to tell you that it's all a ruse. I mean, sure — some kids may do nice things some of the time. But in reality, kids can be downright brutal. It's amazing that they don't all grow up to be supervillains. Anyone who doesn't believe me probably hasn't spent enough time around kids to know the truth — and you should count yourself lucky!

I'm not innocent, either. When I was little, my mom and I were watching Rodgers and Hammerstein's Cinderella one day when I asked her if she had wanted to be Cinderella when she was little. She said that she had, and then little me turned around, looked her up and down and said: "You didn't quite make it, did ya?" WHO DOES THAT?!

Luckily, I turned out mostly non-evil, so maybe there's hope for these kids, too.

Kids give the best advice.

These are the answers that they felt were OK to print! Imagine what the rest of the kids they interviewed said.

Nice to hear from you!

What a sweet note to receive from your child.

I like that simply saying the toy sucks wasn't quite enough. They also had to insult whoever had the awful idea of giving it to them.

That's gotta hurt. That's also gotta hurt– and that too! He's has to be doing it on purpose at this point, right?

Just take any one that you see. Someone's already sitting there? Doesn't matter.

Kids are little monsters sometimes! It's better if we all recognize it and call it like it is.

Look at this! That kid knows exactly what he's doing. He has no shame.

Give me that bread!

Oh, you thought we were here to feed you? NOPE! That's my bread, birdbrain.

I bet you thought you were tough. You'll never be as tough as this child, though.

Donovan doesn't want you to get the wrong idea. You'll probably see your family again. That's the way it is. At least he cares, though.

Is this the same Liam as the text messages we saw earlier? It must be, right?

It's the little things that make being a parent totally worth it. Like seeing messages like this scrawled into the soap. That you bought.

A friendship is born!

I've clearly been going about this whole "making friends" thing all wrong! I'll have to give this method a try.

On the one hand, it's probably true. On the other hand, this is a bad strategy for getting ungrounded.

She's single. She's with no one. No one loves her. She is alone. How many times do I have to say the same thing?

Honestly, I'm impressed they were able to do such a good chalk outline. It looks just like Matt's Youth!

I assume this is all part of some plot to keep you from charging your phone. I don't know what the purpose is, but it's definitely bad.

To tell the truth, this is something I would pull as a married adult in my own home. Maybe I haven't turned out as well as I thought.

I know we're supposed to be covering kids being brutal, but this one is adorable. I hope you screamed when you saw it.

This kid promised his mom that he'd take the hood off if she allowed him to wear this sweater for picture day. Oh, mom. So naive.

What exactly was the teacher expecting, here? Are they not aware of the average lifespan?

If anyone did this to me, I would probably cry. I hope my future kids are not this wily.

Yes, this kid is slightly older than the others on this list. I couldn't bear not to include this masterpiece. I think she's going to turn out fine.

Hey, if you're going to fart, you might as well fart loud. I would wear this bracelet to pretty much any function.

I'm impressed by her ability to use Google Translate, but the attitude at the end is how you end up with no cat on Christmas. At least, that's how it'd work in my house.

Here's one kid's plan for what to do if anything happens to her brother.

She clearly has her priorities set. "Hammer his Legos" is my favorite part.

Another letter from camp.

As someone who hates swimming, I get it. I mean, I probably wouldn't threaten murder, but I get it.

What does Mom do?

Sure, she also raises you to be a contributing member of society, but let's just go with "farts," I guess. Share this with a parent in your life! (So they know they're not alone!)