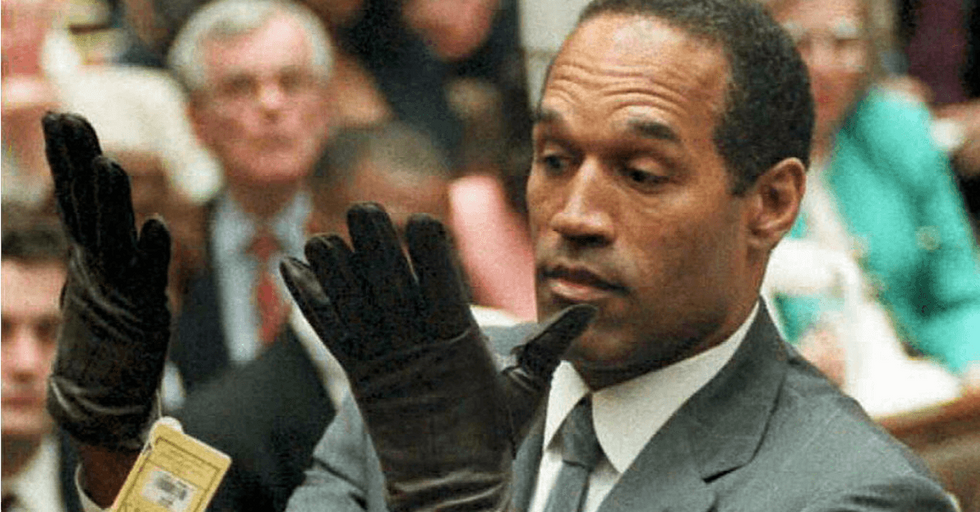 Prosecutor From the O.J. Simpson Murder Trial Reveals What He Thinks REALLY Happened

"If it doesn't fit, you must acquit."

Unless you've been living under a rock, it's a safe bet you've heard defense attorney Johnny Cochran's infamous closing remarks from the O.J. Simpson murder trial back in 1995.

The focus on the ill-fitting glove helped convince a jury to exonerate the famous football player-turned-actor of the murder of Nicole Brown, and the controversial decision still resonates today, even as Simpson is released from prison on parole following his sentence for a 2007 armed robbery and kidnapping charge.

Along with Marcia Clark, Christopher Darden was on the prosecution team for the O.J. Simpson murder trial in 1994.

So when Darden took to Reddit to participate in an AMA, people came out of the woodwork to ask him probing questions about the trial and his life.

His answers are nothing short of fascinating.

Darden participated in the AMA as part of a promotion for the new TV series on Oxygen, The Jury Speaks.

Darden appeared in the episode alongside actual jurors from the case. It aired on July 22. You can watch the whole thing here. And you should.

Reddit user DinoTIme45 started things off with a softball, asking, "What actor has been your favorite portrayal of yourself on television?" Darden replied, "I haven't watched, but everyone says Sterling K. Brown is a better me than me." And it's true. If you haven't watched The People v. O.J. Simpson: American Crime Story, it's worth it. Brown gives an incredible performance.

Continuing in the same vein of essential info, FlashbackX wrote, "Is Fred Goldman's mustache as intimidating in real life as it is on TV?" Ever the good sport, Darden gave the best response: "Fred's mustache is created by God as the eighth wonder of the world, and there's something about Fred, that when he talks, you want to listen. He is a straight-shooter. He never minces words. And he is as good a man as his mustache looks on television."

The Legend of Johnnie Cochran

Now to the trial. TreasonousTeacher asked, "How did Johnny Cochrane [sic] change the tone of the trial from murder to racism so effectively?" Darden's answer? "Cochran used the media to change the conversation as effectively as Donald Trump does." Wow. What a............compliment?

VirtusAlpha48 asked Darden to reflect on the trial, asking, "Knowing what you know now and looking back on the case, would you have done anything different [sic]?" Darden replied thoughtfully, "I would have done lots of things differently. First thing I would have done differently was to not announce beforehand that I intended to arrest O.J. By signaling to him that he was going to be arrested, it allowed him to get into his Bronco and take us on that slow speed Bronco chase." Can you imagine living with the direct memories of a trial that huge and that nitpicked through all these years?

TellMeToMyCrotch may have a ridiculous name, but they asked a pertinent question: "Do you feel the Rodney King beating/LA Riots and elevated racial tensions had an impact on the Simpson verdict?" Darden wrote, "Absolutely. It made the jury more willing to accept the ridiculous idea that LAPD officers framed Simpson." He's basically saying the defense's claims were bogus and preyed on the atmosphere of the time.

AFamiliarStranger wrote, "My question is in regards to the suitcase what was in OJ's custody on the day he arrived from Chicago; later, Rob Kardashian walked away with it...I'm not asking for speculation on what was in it, but rather curious how big of a focal point it was for the prosecution team to obtain it? Do you think the state could have gotten the contents of the suitcase? And finally, how do you personally feel about the potential evidence walking out the front door for the "Trial of the Century"? Many speculate that the Louis Vuitton bag taken away by Robert Kardashian may have held crucial evidence related to the murders that could have definitively implicated O.J. Darden is well aware of that. He responded, "Every time I see video of Simpson handing the Louis Vuitton bag to Kardashian, it makes me sick. We never learned the contents of the bag. I brought Kardashian to the Grand Jury and asked him about the bag under oath. There's nothing more I could say about that."

"If it doesn't fit, you must acquit!"

Everyone—and I mean everyone—has thoughts about the moment in the trial where O.J. tried on the leather glove and claimed it didn't fit. T3ach3r24 asked Darden, "Do you feel OJ really put forth his best effort when trying on the glove? To me, it has always appeared that he bent his hand just enough to prevent the glove from sliding on." He replied, "No, he played around with it and tried to avoid making it fit. I hoped the jury would recognize that, but they couldn't see it, because they didn't want to see it." All signs point to Darden believing the glove did actually fit.

Ino_things asked, "Is it true that OJ could come out publicly not and say, 'yes, I did it. I killed them both" and nothing could be done about it?" Darden's bombshell response was, "Yes, that is true. He has been found innocent, and to prosecute him again in state court would constitute double jeopardy and would be precluded by law. Did I say innocent? I meant not guilty." REWIND. Let's take that again. "Did I say innocent? I meant not guilty." Darden is saying that while the jury found O.J. not guilty, that in no way means that he's innocent.