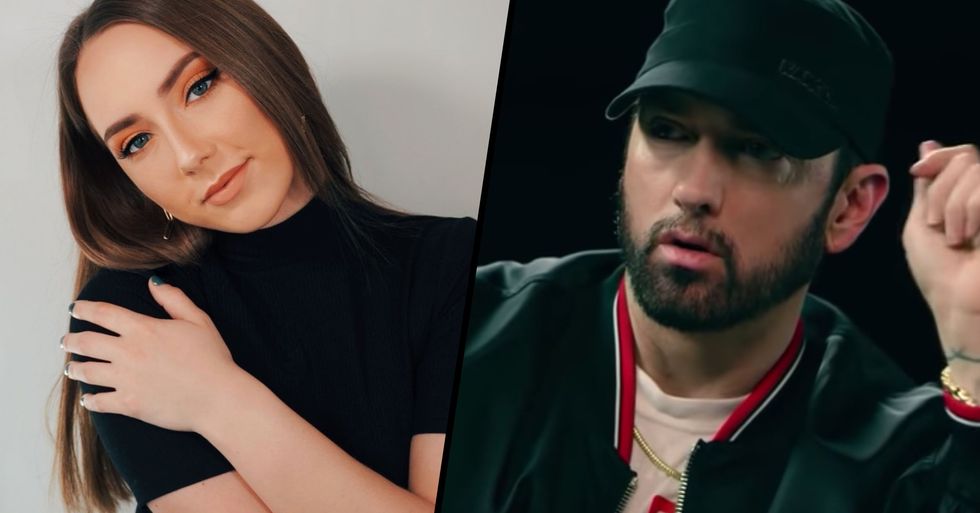 In a recent appearance on Mike Tyson's chat show, Hotboxin With Mike Tyson, infamous rapper, Eminem, gushed about how proud he is of his daughter, Hailie Mathers, in an unusual display of emotion and affection.

Keep scrolling for the full story, and to hear why he is so proud of his daughter...

Eminem has built his image around an angsty, rebellious young man who simply "doesn't give a f***".

But, despite his own issues and turbulent upbringing...

The rapper has seemingly being determined to provide his own children with a very different life to the one he has lead.

The rapper has 3 daughters.

Eminem has prided himself on being a good father.

And, earlier this month, he opened up about fatherhood in an interview with Mike Tyson on his show, Hotboxing With Mike Tyson.

The rapper discussed all things parenting...

And, when asked about the thing he prides himself most on, he replied: “So when I think about my accomplishments like that’s probably the thing that I’m the most proud of, you know, is that — is being able to raise kids." He also added that it’s important to keep kids “grounded" when they grow up with famous parents.

The topic then turned to his biological daughter, Hailie.

Out of all his children, Hailie is by far in the spotlight the most, having gained 1.9 million followers on Instagram.

The young woman has opened up about her relationship with her dad in the past...

And, when asked if her dad is supportive of her, she replied, “Of course, we are very close," without hesitation.

And recently graduated with an impressive 3.9 GPA.

So, understandably, Eminem is one proud dad.

When Tyson brought up her accomplishment, the rapper replied: “She’s made me proud for sure."

Tyson then broached the topic of Hailie having her own family one day...

In which Eminem hastily replied: “No babies. Just a boyfriend. She’s doing good."

As to whether Eminem approves of Hailie's boyfriend, we are yet to find out.

But he seems to be genuinely very happy for his daughter, which can only be a positive sign... Though we don't envy any young man who has Eminem as his father-in-law.

You can watch the rapper's full interview here.