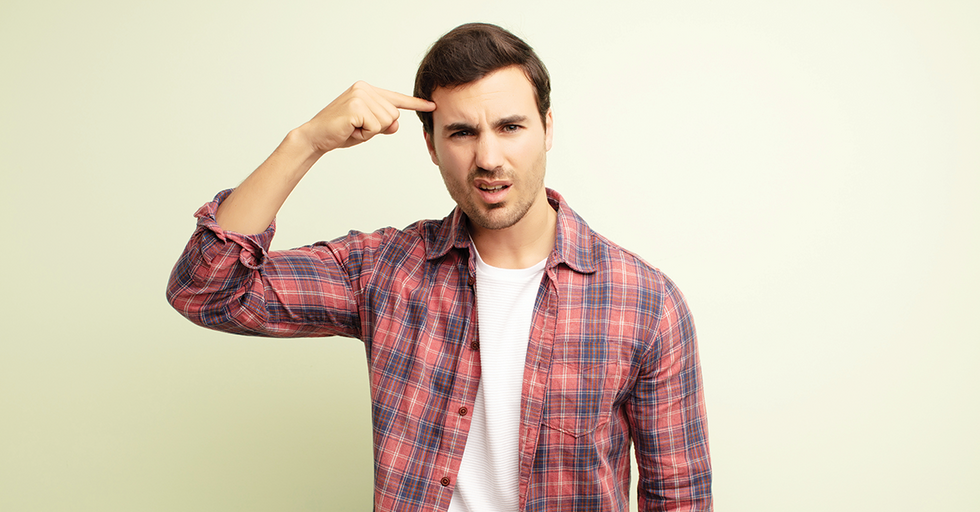 We’ve all heard stories of those who have faked insanity in court to get out of legal trouble, but the people in this list went one step further and tried to pretend to be legally insane to actual doctors. Yep, seriously.

Convincing someone that you’re mentally incompetent isn’t just about acting irrationally. Doctors can tell if someone is faking it by asking a series of questions to determine if the person is just fabricating their story. Or by simply observing certain behaviors that are exaggerated, like faking a seizure, all to make their claim of insanity seem genuine.

So if you've ever thought about faking insanity or any mental illness out of curiosity, know that people can tell and these wild stories will help you understand how.

Ever wonder what it takes to claim that you're insane?

If we're being honest, I think many of us have.

Also, seems that ever since courts allowed the insanity defense, it comes up more often than we think.

We've also seen this a lot in movies and television.

Though it takes more than just sporadic behavior to convince mental health professionals that you're insane.

And they have the science to prove it.

And the health professionals of Reddit have stories to tell about this.

And they are outrageous.

These stories are weird, yet interesting.

You'll want to grab a snack as you scroll through because these stories are riveting.

That's not how these happen.

Patient who yelled, “IM...HAVING...A SEIZUUUURE!!!" while shaking all limbs uncontrollably because we were pretty sure malingering guy didn’t meet criteria for admission.

How can anyone keep up with that?

Psych nurse-back in the 90s multiple personality disorder was all the rage (and not true). I would regularly treat people, some of whom claimed 100+ personalities lol -Obes99

No one was shocked by this.

I had a lady who loooooved attention. She thought she was crazy and had dissociative identity disorder (think the movie Split).  She claimed to have many different personalities, one of them where she regresses into a 10 year old boy named Billy.

Anyways, this lady started screaming and throwing herself on the floor. Nurses were trying to control her without giving too much attention and feeding into it. She then saw the medical student and the patient told him “TELL DR MACARONI AND SNEEZE THAT BILLY IS OUT NOW!" She said this incredibly clear and concise, not in a whining 10-year-old tone she was switching in and out of.

It's because of cases like this one that defendants plead the insanity defense.

A serial killer named Kenneth Bianchi tried to plea insanity during his trial until the prosecution's psychiatrist did this:

At his trial, Bianchi pleaded not guilty by reason of insanity, claiming that another personality, one "Steve Walker", had committed the crimes. He convinced a few expert psychiatrists that he indeed suffered from multiple personality disorder, but investigators brought in their own psychiatrists, mainly Martin Orne. When Orne mentioned to Bianchi that in genuine cases of the disorder, there tends to be three or more personalities, Bianchi promptly created another alias, "Billy".

Faking insanity was part of this woman's plan to avoid jail time.

I was placed on a psychiatric hold after an attempted suicide brought on by medication I had been placed on.

Anyway the first night there was a woman in my room who was there for some court-related evaluation. She got up in the middle of the night and pissed all over the floor then smeared a wall in period blood. I overheard her telling another patient there was no way she was going back to jail again. It was disgusting.

The main goal is to take advantage of a system, either to stay out of jail or to be able to stay somewhere.

Psychiatric resident here. A lot of patients threaten with suicide just to get admitted or to get more pills.

There's also the other way around. Sometimes patients (usually admitted with a manic or psychotic episode) can tell you crazy stories that seem to be part of the illness, but turn out to be (partially) true.

A major problem with people faking insanity is that it causes cases for people that actually do have a mental health disorder to also not be believed.

I also have bipolar 2 and I am constantly plagued with the thought that I could be faking or manipulating others. When I was a teenager I was admitted to an inpatient facility and my mom told all the doctors and nurses I was faking for attention and I'm just manipulative. It's stuck with me ever since. -Jacque_38

Even hospital security have stories of malingerers.

I work in hospital security, I have seen countless attempts at faking illness/injury, psychological and otherwise. Suicidal idealizations and vague pain in various parts of the body are usually the go to methods for drug/shelter seeking types. This is not to discount the people that have genuine problems as I have also seen plenty of those. There are plenty of people who are "frequent fliers" who abuse the EMS/medical system constantly for one reason or another.
-BigBodyBuzz07

Bet he will be back again.

" target="_blank">Getty Images One time when I was being admitted to a psych ward in the 8th grade there was an older man who obviously had mental issues as he literally lit himself on fire, which is why he was there. He looked at me and said "watch this." Man is full on screaming and faking a seizure, making his spit bubble and come out of his mouth. The cops and fire department were there in an instant and he was taken to the hospital. I've heard that patients do that because they can walk out of the hospital and go back to normal. -hallielaineeee

Thanks to this lawyer, we get to read about court entries on a case.

I'm a lawyer of reddit, but I think you'll appreciate these minute entries from a case I handled back in my days as a public defender (the bottom one is best).

11/20/2014 Deft again appears in court, falls on the floor and refuses to get up, finally arises, arraignment done when deft begins yelling in court. This is not mental issue, it is an issue of attempted obstruction of the process of the court. Deft is found in contempt for behavior & given 30 Actual Days Jail. PD Appt. Prelim set for 12/09/14 @ 830am.

The things some people do to get out of a job.

A guy I served with tried to get out of conscription by showing up on enrollment day dressed in a purple kilt and marching around with a plunger as a prop rifle. He even had a plunger tattooed on his arm. He was told to lose the kilt, but he kept the plunger for some weeks before he gave up. He turned out to be quite a good soldier.
-Posterboy83

This is not how you get a date.

I had a guy tell me he was "clinically insane" and that he had "the papers to prove it." Said he was "certifiable". It was stupid to begin with, but what made it worse, is that he was using that to try to hit on me. -morganalefaye125

There is more to some cases of malingering like this next story.

Did a psych placement as a student and was in a discharge meeting with a homeless guy. He was brought into the hospital because police had been called as he was threatening to jump off a bridge. He claimed depression and suicidal thoughts, which it was found out not to be. So he said he was hearing voices, which was also not true. Dude was just desperate to have shelter and food. Sad case. -me_earl

Some people just want a place to stay.

I worked as an on call Crisis Worker in a community hospital responding mostly to ER calls. A chronic patient with a borderline personality disorder diagnosis presented with behavior that did not warrant an inpatient hospitalization, despite wanting it. When I was getting his discharge instructions together, he left the exam room he was in and found a cleaning cart and sipped some cleaning solution. He drank something off the cart. I think he swished and spit it out, but he got his wish. -funky_eggplant

Displays of insanity show how broken our system is in care.

My grandfather used to always say "If you're hungry and have nowhere to go, just yell at a cop" when my mom was a kid. This was in Louisiana, around New Orleans and across the lake.  -SatoshiUSA

What I’ve always wondered is that if a person would try to fake insanity, then he is surely mentally ill because no normal person would do so. -quantumshrarry

But the struggle for people suffering through mental illness is real.

I've seen many people fake insanity because to them, it's some sort of moronic status symbol. The people that truly struggle with mental health, try their hardest to live normal lives and appear normal. The only time they let the mask slip is when they're caught off guard or when they genuinely want help. -ThatasShol

This therapist knows their in law is faking it.

Therapist here. But this is going on a personal level and one of the few reasons I got in this field

Step mother faking having dissociative identity disorder. after watching how people act and react around them. She's a narcissist  with zero empathy and loves to play any card to give her the right spot light.

Some people are actually insane, especially when they get to this point.

One of my psych professors worked with a woman who was transferred to inpatient from prison. Police told her they knew she was faking. She had stripped naked in her cell and began eating her own feces.

This person seems to think that Youtube personality, Onision, is faking his meltdowns.

Not a psychiatrist, but Onision's meltdowns are hilariously and disturbingly fake. This man really thinks he's the Joker. -lunaandthestars

Psychiatrists know when you're faking it, so if you're not, you shouldn't worry.

I've got a laundry list of issues and for the longest time I refused to go get tested for fear of being committed but more so because I was worried the psychiatrist was going to think I was faking and for some reason that scared me the most. -demonman101

This is actually insane.

When I was doing my psych rotation in nursing school I had to do it at a state psychiatric hospital. There was one young woman who had multiple diagnosis who would elope every weekend and come back on Monday. She was HIV + and given it unknowingly . She would go out for the weekend and have unprotected sex with as many men who would have her and come back on Monday. She said she was paying it forward. -Brooksie515

I can only imagine how silly this probably looks.

As a paramedic, the fake seizures are always fun. -phoenix25

Another Youtube personality gets called out for faking their mental illness.

This lady online, Trisha Paytas, said she had DID because it was trending on Youtube thanks to an interview video made by Anthony Padilla. Originally, she self diagnosed because she "would act like other people" when she met them. This is not what DID is.  -God_is_carnage

My brother is a psychiatrist and one day he called me saying that there was a child that came into his room that was squirming and screaming in his mothers arms. He asked her how long has he been doing this and she said that it started today in the morning when he started to scream and punch the floor while he was getting ready for school, screaming I don’t want to go.  My brother thinks that mom actually believes he is insane but he knows that he just wants to skip school and act insane. -yummydoggy