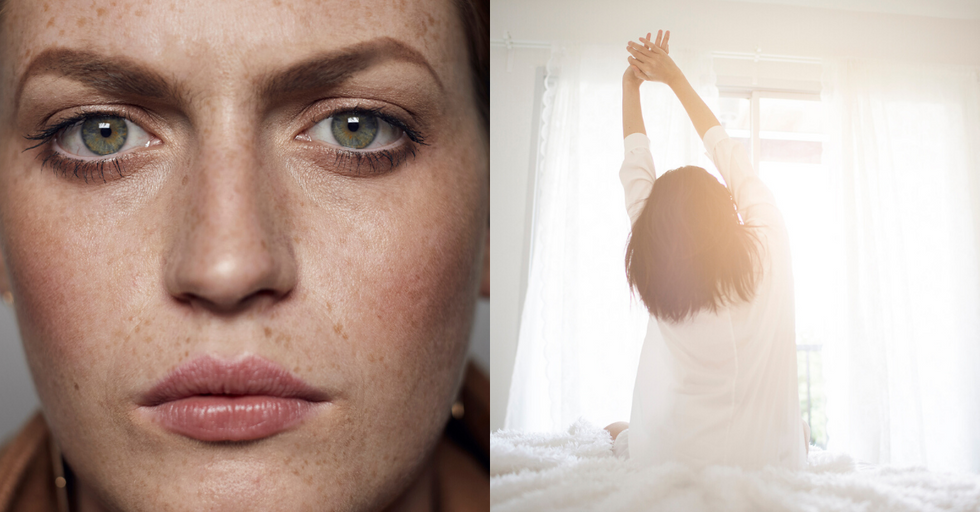 Human beings are playing psychological tricks on each other every single day. Often times these tricks are little survival tips we’ve picked up throughout life; those of which we don’t even realize we're using.

Maybe your trick involves reciting a mantra, to help get yourself out of the door. Maybe it’s envisioning everyone in the room naked when you have to give a presentation. Psychological tricks exist to make life a bit easier for all of us, and without them, most people would fall into the trap of avoiding everyday routines.

Getting out of Bed in the Morning

Would you say that you're not a morning person? Do you wake up feeling those all-too-common work dreads? Fear not — there’s a fix for that.

It’s easy enough to admit that you want to get out of bed earlier. But if you don’t have a specific reason for waking up earlier than usual, you’ll most likely hit the snooze button. So set your motive for being up earlier. Make a commitment to workout with a friend, tell a neighbor you’ll make them breakfast before work, or offer to pick up bagels for the office.

And If you can’t make a morning commitment every day of the week — because, let’s face the facts, that would be exhausting — try getting out of bed anyway. Stretch, brew coffee, turn on the local news, or pick out your clothes for the day. Before you know it, you’ll have started your day and will be less inclined to go back to sleep.

While getting out of bed might be a bit of a struggle, if you’re someone who dreads being around groups of people, then leaving your house is an even bigger battle. While major crowd anxiety is best dealt with through therapy, possibly hypnosis, or medication, there are still some psychological tricks to make enduring them a bit easier.

First off, pay attention to your breathing. As humans, we tend to breathe rapidly and with shallow breaths when we are nervous. This will end up creating more anxiety. By taking shallow breaths, you aren't providing enough air into your lungs, resulting in dizziness. So before you step onto a crowded street or into a packed coffee house, take a minute to slow your breathing. Focus on how you’re feeling. If you step into an area while feeling calm, chances are you’ll stay that way.

Secondly, no one is forcing you to buy your coffee at the most crowded Starbucks in the neighborhood. If you don’t like long lines of people, go a few blocks over to the coffee house with less foot traffic. Someone who’s scared of heights doesn’t conquer their fear by climbing to the top of the Eiffel Tower on their first day. You can baby step your way to the big Starbucks, but you don’t need to get there overnight.

Plenty of people have a fear of speaking in public — in fact, it’s such a problem, that there’s even an Institute of Public Speaking devoted to helping people become better speakers. But, there are still some things you can do to help ease the pain, even without graduating as the world's next great orator.

What exactly are you so scared of? Do you fear of being labeled as a bad speaker? Do you believe that others can tell when you’re nervous? According to Psychology Today, these fears are irrational. Many worries about public speaking often stem from suspicion, rather than fact.

So let’s try and put a positive spin on this. Head into your public speech thinking that you’ve already knocked it out of the park. Once you’ve done that, shift your goal. Don’t focus any energy on giving a great speech. Focus your energy on communicating thoughts effectively to the crowd. If you can get everyone to leave the room understanding the ideas you laid out in front of them, then you’ve done your job. Your speech is a success.

You don’t need to receive a standing ovation to be a great speaker. All you need is for everyone to understand what you said.

Many people struggle to maintain eye contact in conversation. We all know that it's a common courtesy, and yet it's still so uncomfortable for many.

Here’s a psychological trick to help make conversations easier. Instead of focusing directly on making eye contact, try to focus on what color the other person’s eyes are. But, don’t make it obvious, like you’re trying to win a staring contest. This trick will help keep your attention focused, and once you practice this enough times, multitasking in conversation will become a piece of cake.

There are not many people in the world who enjoy fighting. Whether it's with a loved one or a friend, those who truly enjoy confrontation are people who aren’t currently happy with their life. So if confrontation scares you, consider yourself normal.

The biggest thing to consider when tackling your fear of confrontation is the thought of what might happen if you don’t speak up about your true feelings. If you realize that by not speaking up, you'll still be unhappy, perhaps it's time to face your fear.

Now, instead of rushing into a confrontation ready to fight, approach the situation with a mindset of settling on the common ground. Don’t hit someone with a barrage of complaints. Stick to one issue at a time and address how it is making you feel. Psychology Today advises those to use, “I" statements, rather than focusing on yourself. Saying something like, “you’re so self-centered... you only care about yourself, that’s why you’re always late" does no one any good. It puts the person you’re speaking to on the defensive.

Instead, you could say, “I feel like I’m not that important to you when you make me wait because you’re late." Most people don’t want to disappoint others, and this a great way to make them listen.

Finally, find a safe space to have these types of conversations. Don’t confront someone in their private home or in a public setting. Find a neutral ground.

Fear of Failure and of Irrational Outcomes

The biggest fears people face regularly are the fear of failure and the fear of irrational incidents. Often times, overthinking can lead these fears to spiral out of control.

You can explain to someone over and over again that their fear is irrational, but our minds are not always receptive. Distracting yourself won’t accomplish much. When you switch your brain to focus on something else, you might actually end up focusing on what you're worried about due to panic.

You can follow these psychological tricks to train your brain into a more positive space. First off, when a fearful thought pops into your head, say the word “stop" out loud. If you’re in a public space, you can mouth it to yourself. Take a pause and imagine a brick wall popping up to block your fear. Working to stop thoughts like these isn't easy. But if you use this trick, you can prevent yourself from obsessively thinking.

Next, shift your focus to something positive. Put on a movie that you love, or you go to dinner with a friend who makes you laugh. Go for a walk in between work, or take a 10-minute nap in the conference room. We don’t always have control over where we’re going to be when our brain starts to spiral out of control, but we can do our best to introduce a positive way of working through the moment.