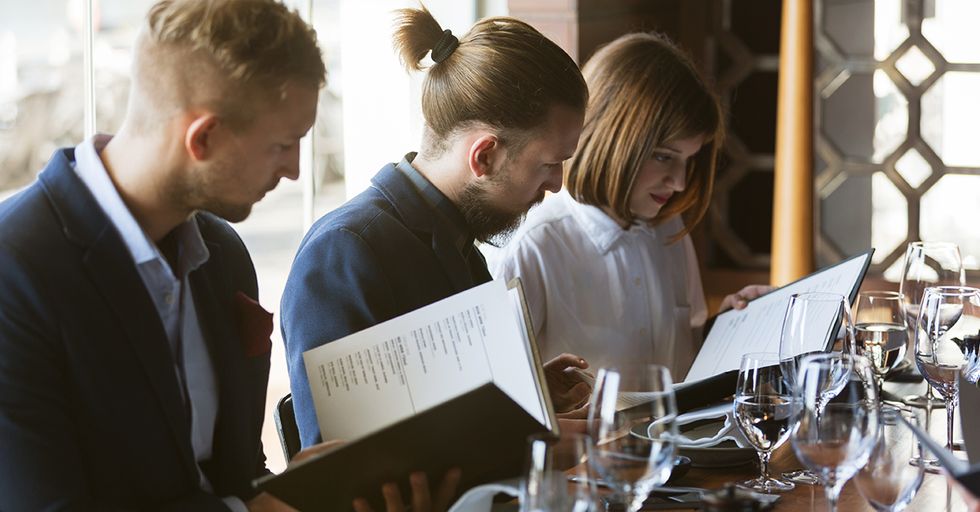 It starts as soon as you sit down at the table in any given restaurant.

The server brings you a menu and suddenly, you're putty in their hands.

You may think you know exactly what you want, but there are a bunch of psychological tricks at play, and you're probably falling for every single one of 'em.

Interestingly enough, there's an impressive amount of intentional design and science that goes into crafting a restaurant's menu.
There's an entire industry known as "menu engineering" whose main goal is to get you (the customer) to spend as much money as possible at any given restaurant.

Research has shown that if a menu is heavy, your brain tricks you into believing that you're eating at a high-quality restaurant. After all, a cheap paper menu doesn't exactly scream "quality," but if the restaurant was willing to shell out for a high-quality menu, their food must be of very good quality, too. Right?
Maybe! Or maybe they're just tricking you into thinking that.

Researchers in Switzerland found that the more difficult-to-read a wine label is, the more people like it. (Which totally fits the wine-lover stereotype, right?) So when it comes to restaurant menus, the fancier the font, the more the restaurant may charge for the food.

Many restaurants choose to put the most expensive dishes at the top of the menu. But it's not so you'll order the first thing you see.
Rather, the trick is that you'll skip over the most expensive things on the menu and then think that everything else is much more reasonably priced by comparison. ...Even if it's actually overpriced. You'll subconsciously congratulate yourself on avoiding the expensive stuff and "settle" for a still-expensive-but-not-quite-as-expensive meal instead. Tricky!

And speaking of prices, there's a trick to those, too. (Of course there is. There's a trick to everything.) First of all, things will often be priced just under a flat dollar amount (so $9.99 rather than $10 even). You're undoubtedly familiar with this trick already as it's used all over the place to trick people into thinking something costs less — even though we're all totally wise to the game.
But another thing restaurants will sometimes do is eliminate the dollar sign altogether from their menu. Sometimes they'll just use the numbers, and sometimes they'll even write the price out in words (i.e., "twelve dollars") in order to trick you into forgetting that you're spending money. Now let's talk about the actual menu items themselves...

In fancy restaurants (or restaurants that are pretending to be fancy), you might notice that the individual menu items have long descriptions.

A steak isn't just a steak. The menu includes information like what kind of cow the steak came from and what farm the cow was raised on. And they don't stop there. They'll also include a lengthy description of how the steak was cooked and every individual artisan side dish it's served with.

And cookies aren't just cookies. They're "Grandma's Famous Country Fair Chocolate Chip Cookies." Even if no grandmas were involved in the process at any point (and they probably weren't).
Giving food items some kind of history — even if it's completely fictional — gives the impression of higher-quality foods. And, naturally, higher-quality foods should cost more.

And, obviously, the more foreign-sounding words you can fit in, the better. Which is to say, "the more you can charge for the product." In fact, the way you actually move your lips to form the words is also important...

And it's not just the meaning behind the words that lends an air of quality — it's the specific words themselves. The actual way that your mouth moves to pronounce different words also has a direct effect on your brain. This applies even when you're not reading the word aloud. For instance...
Apparently, words that move from the front of your mouth to the back of it — like "pleerog" (a word I just made up) — are more appealing. Pleerogs don't even exist, but don't you kinda want to eat one?

The colors used within the menu are also of the utmost importance. Green means fresh.

And orange is flashy, exciting, and may even stimulate your appetite. This applies both to pictures included in the menu itself and to any other graphics the menu might contain. That includes things like boxes around individual menu items or logos that offer additional info — such as that a particular item is vegetarian, gluten-free, or seasonal.
So, there you have it. Do you still feel like you have complete control over what you order from a restaurant? Or is that control merely an illusion?