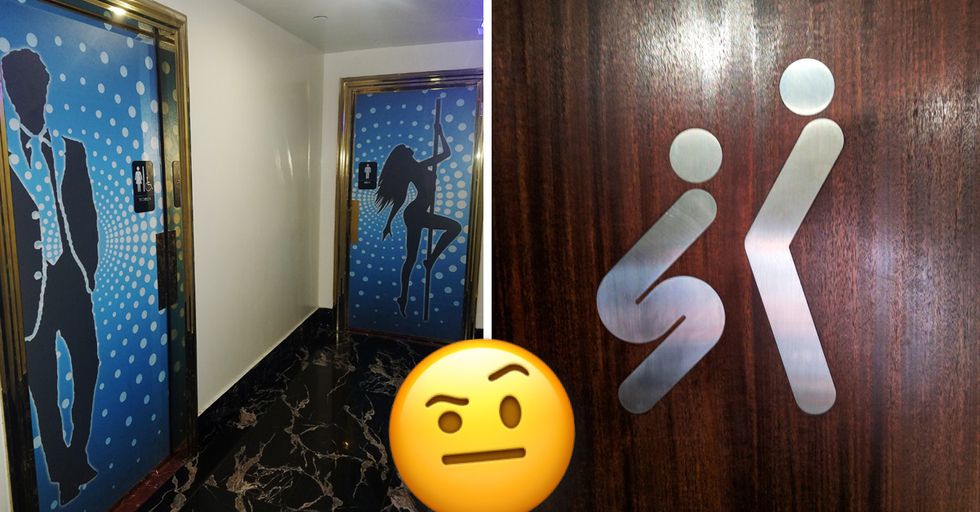 Public Restroom Signs That Are Too Clever for Their Own Good

I'm sure this is no news to you, but: Everybody poops.

Yes, that's right. Every single person on the planet has to use the restroom at some point in their lives. That's just the way it works. But you know what every single person doesn't need? A clever little sign letting them know which bathroom they're allowed to void their bowels in.

And yet, some restaurants and other public establishments have taken it upon themselves to label their bathrooms in such a way that is, as some might say, too clever by half. There are plenty of things to joke about when it comes to things humans do. For instance, fart jokes are always funny! But creating jokes purely for the purpose of labeling which bathroom is for which sort of human? It's weird. It's hella normative. And it's also, just...not that funny?

Oh yeah. And it's confusing!

If you don't know what I mean, just keep reading. Here are some bathroom signs that are really just too clever for their own good.

I'm trying to think of a context in which trying to label a stranger as one or the other is appropriate. I'm coming up blank.

Why doesn't the guy pizza have arms? Did I miss something in my pizza anatomy class?

This is sure to cause some issues.

I have to imagine that whoever came up with this idea thought they were being very smart and funny. Alas, they were not.

Now they're just messing with me.

I'm pretty sure that if I ever ran into a bathroom situation like this in real life, I'd probably just leave the establishment. Or pee in the hallway.

How did they mess this up?!

It's almost as if the misdirection was intentional. Actually, are we sure it's not?

I'm not totally sure what's going on here, but I'm pretty sure that it's not safe for work.

Have you ever wondered, "Why men?" Well, here's your answer! "Men because women to the are left always right."

Pick a door. Any door!

The only way I'm OK with this one is if they're both filled with puppies. Actually, that goes for pretty much all of the bathrooms on this list.

Are they both supposed to be hair down there? Never mind. I don't actually want to know.

Believe it or not, this is only the first sausage-related bathroom sign on this list. I know. I'm sorry.

This one is halfway OK.

Like, I get the W stands for "women" and the M stands for "men." But why do they have heads?

Cool! Now I can pee and be offended at the same time.

Get it? Because women talk a lot? Boy, this sure is hilarious. So funny. I'm laughing so hard.

I'd say it's a pretty bold move for a bar owner to use beer to symbolize pee on their bathroom signs. Not sure it speaks too highly of the stuff they're serving.

It's awkward, it's clunky, and it's heteronormative! I'll take it! (To the Dumpster.)

I'm guessing you can already hear my eyes rolling.

Can we stop with these already? I'm begging you!

This one's out of this world.

I had actually never wondered what a girl Android alien looked like. I guess now I know.

The peach is a vagina and the banana is a penis. You get it.

I agree with this Twitter user. These signs should be outside every restroom!

What have I done with my valuable break time this morning? Welp, I designed some bathroom signs for the office. 😬 https://t.co/umxnfRoFFB
— BigHorse (@BigHorse)1532358628.0

Although shouldn't it be "Shelium"? Whatever. Close enough.

Did you know that in nature, only female squirrels wear clothes? If you've never seen a squirrel wearing clothes, then I guess you've only seen male squirrels. That's science.

Mr. and Ms. Pacman, I presume.

Well, you probably wouldn't be confused as to which bathroom you were supposed to enter here. I guess it at least has that going for it.

I get what they're going for here, but I can't help but feel offended on behalf of the "girls." They'll starve!

Do you get this one?

If so, please let me know at your earliest convenience. I've been puzzling over it for a while and I still don't understand it.

This had to have been intentional.

Right? Somewhere out there, there's a contractor who's having a good laugh and feeling very proud of themselves for this, their greatest achievement.

That was a close one!

Actually, even if you weren't paying attention, you'd probably go into the right door based on the characters painted on it. Right? I don't know. I'm overthinking it.

Ooh, I love both kinds of doughnuts! Guess I'll have to try both doors out.

...I just really, really wanna know why helmets are needed in the restroom. And why they're not needed for adults.

Hopefully, you're not in any hurry. Share this with someone who could use a laugh today!