But the drink has also been subject to ridicule. | 22 Words 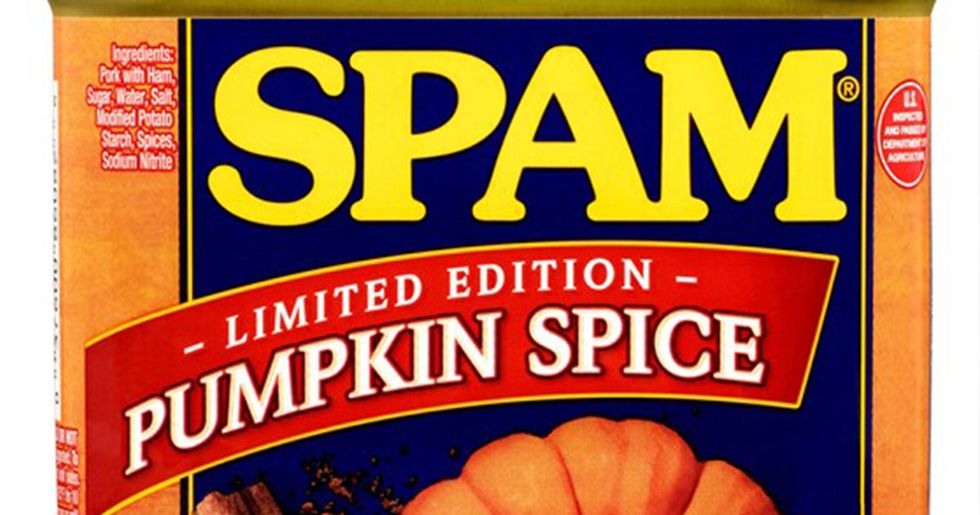 It's that time of the year again. We're waving goodbye to summer and plummeting towards fall - which means only one thing... we're going to be bombarded with pumpkin spice everything for the next few months.

From pumpkin spice lattes to pumpkin spice candles, it really is the nation's favorite fall flavor, and it seems like every brand wants in on the trend. But pumpkin spice spam? Erm, that's a bit far, right?

Well, apparently, pumpkin spice spam is a thing and, apparently, it tastes surprisingly good, although the internet isn't quite sure what to make of it.

As weird food combos go, this is definitely up there with some of the weirdest...

It's getting to that time of year again.

Unlucky for the summer-loving folk amongst us, summer is coming to an end as we head into fall.

And fall means one thing...

There's pretty much nothing that you can't get in the flavor.

From candles and handsoaps to donuts and candy, nothing is off limits.

But can we all agree that this is the OG?

The Starbucks "Pumpkin Spice Latte" is pretty much the pinnacle of fall.

Many coffee-lovers are firm fans of the beverage.

Some people say that they'd have it all year round if they could.

But the drink has also been subject to ridicule.

Many think that the drink is overrated and has become part of the "common white girl" culture.

But now there's a new pumpkin spice product on the block.

Although it's probably one of the weirdest things you'll see.

That's right, the canned ham brand is getting in on the fall trend, although it has to be said, the combo of pumpkin spice and salty ham doesn't sound all that appetizing.

The first reviews are in, and people are saying that it's actually nice. Dan Myers was one critic to give the strange combo a try and he shocked us all when he wrote that he somewhat enjoyed the product. While "the combined scent of heavily processed ham and sweet pumpkin spice was a bit off-putting," he explained, "surprisingly, the general consensus was that the flavor really wasn't bad."

Although other tasters seemed even more on board.

Apparently, the processed ham and pumpkin spice combo tastes kind of like a sweet breakfast sausage.

"It reminds me of breakfast sausage," one said. "Honestly, it would go great with some eggs and waffles," while another said: "It definitely seems like it would work best when paired with other elements, like in a scramble or breakfast sandwich, though."

The internet is having some strong reactions to the pumpkin spice themed product.

Many couldn't wrap their heads around the strange flavor combination.

And can you blame them? It hardly sounds like it would be the nicest tasting thing. We think we'll stick to basic pumpkin spice lattes instead.

Others were declaring how thrilled they are to be vegetarian right now.

@femtoduino One advantage of being a vegetarian is having an automatic excuse I can use to avoid having to try prod… https://t.co/dfSBrS2oQG
— Bill Stewart (@Bill Stewart)1565747754.0

Pumpkin Spice Spam will be hitting shelves this September.

Anyone desperate to try the product can purchase it from September 23rd via Spam.com and Walmart.com.

But, if the thought of pumpkin spice spam is (understandably) failing to tempt your tastebuds, maybe this will...

Fastfood giant, McDonald's, could be launching spicy chicken nuggets in the U.S. this September. The spicy rendition of the cult fave has just hit the U.K. and it looks like America could also be getting in on the spicy food trend. Keep scrolling to get all the details...