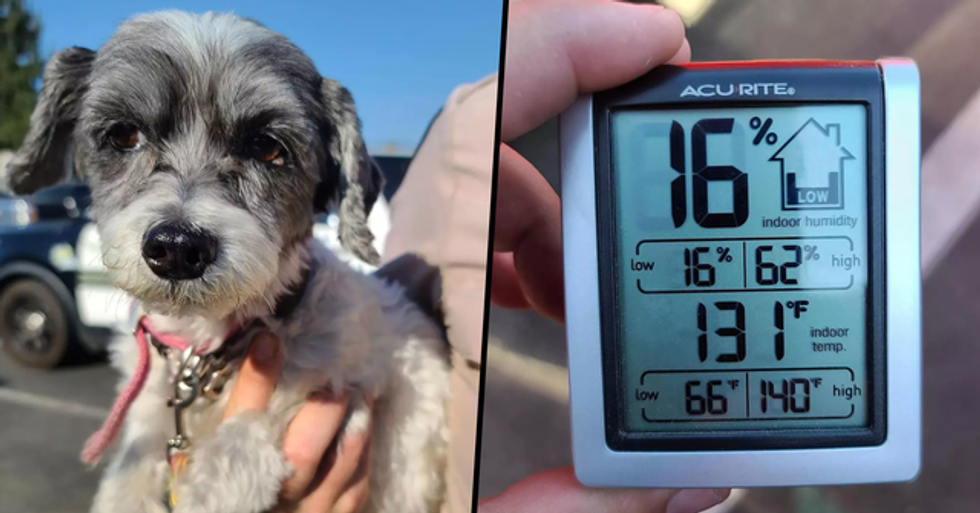 A puppy who had been locked in a swelteringly hot car called for help in the most heartbreaking of ways...

By now, we should all know the golden rule about not leaving dogs in cars on hot days.

While many of us deem it as okay to leave our dogs in the car while we run a "quick" errand, it is actually extremely detrimental to their health, especially on warm days.

A vehicle parked in the sun for just one hour can reach an average cabin temperature of 116 degrees Fahrenheit. And, in a locked vehicle, a dark dashboard, steering wheel or seat can often reach staggering temperature ranges of 180-200 degrees.

So, when a dog is locked in one of these hot vehicles with no fresh air or water...

Their bodies can very quickly overheat.

Dogs are unable to regulate their body temperatures as well as we do.

They have a very limited number of sweat glands on only their noses and paw pads, which ultimately leaves a vast amount of external and internal surface area unaccounted for.

When feeling warm, they attempt to regulate their temperature by panting...

And the hotter it is, the more furiously they pant.

But any relief they gain comes at the cost of body fluid and dehydration.

So, when left in a hot car for even a few minutes, a dog may develop symptoms of non-fever hyperthermia when its body temperature hits 103 degrees, or heat stroke at 106.

And, the longer a dog is subjected to intense heat...

Which can be a case of just ten minutes, the greater the chance that its vital systems will begin to shut down.

So, it doesn't take a genius to work out that you shouldn't be leaving your dog locked in a car on a hot day...

And, thanks to persistent campaigning, awareness of the issue is higher than ever before.

Animal rights groups such as PETA consistently stress the dangers of leaving animals locked in cars...

Especially with the long queues and waits in stores as a result of the COVID-19 pandemic.

And, thanks to the internet...

More and more of these careless owners are publicly outed and shamed when they leave their pets in their sweltering vehicles.

However, despite the consistent warnings and growing awareness...

Owners all over the world are still continuing to leave their pets in unbearably hot conditions for the sake of their own conveniences.

We still have a long way to go.

PETA reported that, since 2019, seventy-six dogs and other animal companions died while locked in hot cars here in the States.

Thankfully, many of these dogs are rescued by kind-hearted passersby before they succumb to the heat...

But this week, one dog took matters into his own hands (or paws...).

A puppy named Boomer was left by his owners in a scorching hot car this week.

The pup was locked in a parked vehicle in San Jacinto, California, where the outside temperature was reaching almost 100 degrees Fahrenheit.

The poor pup, desperate for air and water, yelped and screeched for help...

Until a passerby grew concerned with the noises and went to investigate.

But, upon reaching the car, little Boomer was laid motionless and in visible distress.

Thankfully, the passerby managed to rescue the puppy from the scorching car, administer first aid, and called the police.

Officers from the Riverside County Sherrif's Office quickly arrived at the scene...

Where they placed Boomer in the back of an air-conditioned patrol car to cool down. They shared a photo of the pooch on their Facebook page, which shows him being held and looking a little weary and fragile.

They also shared a photo of their temperature reading from the car...

Deputies had noted that the internal temperature of the vehicle reached a horrifying 130 degrees.

And was subsequently arrested for animal cruelty. In their Facebook post, the police also explained how Boomer had been given to the Ramona Humane Society to be cared for.

Let's just hope that Boomer can find happiness with a new and loving family. For more on the shocking treatment of pets, keep scrolling to read about the man who placed his dog on the roof of his car because "there wasn't room" inside the vehicle...