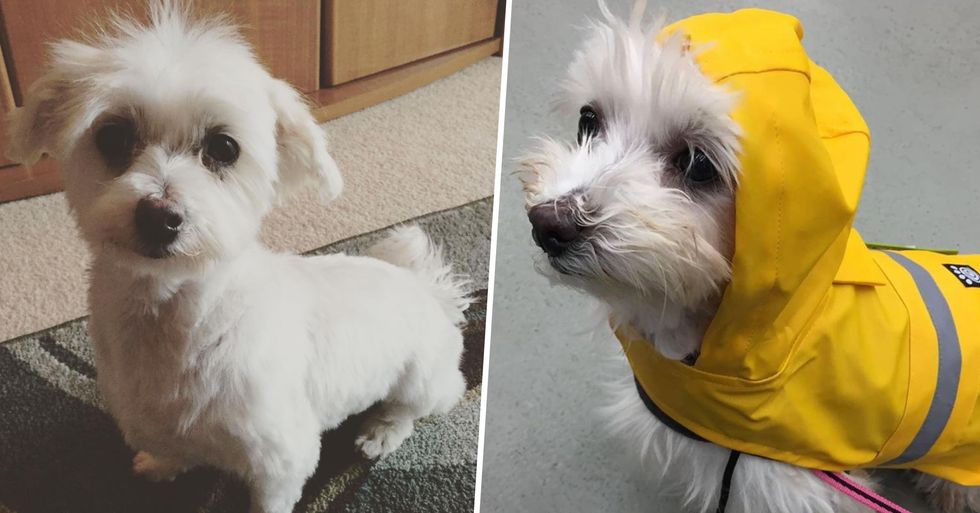 Puppy mills are still a massive issue here in America. But now, one pup has luckily been given a second chance at life, and even went on to win the World's Cutest Rescue Dog...

The pictures are heart-melting, and the reason behind her unusual name is even cuter.

One rescue dog has made headlines this week.

And his story will melt even the coldest of hearts.

This puppy is the winner of the world's cutest dog contest, but it hasn't always been easy for this little doggo.

She adopted the shy little Maltese in December 2014.

After the death of her beloved rescue cat Seven...

Schubert had hopes of forming a special connection with a pet in need of a home at the Washington County Humane Society.

Although she hadn't initially planned to get a dog...

″I hadn’t planned on getting a dog,″ admits the forty-one-year-old, who works in IT for Harley Davidson, ″but she was so small. She struck my heart."

Lamb Chop has also gone on to steal the hearts of voters for the third annual World’s Cutest Rescue Dog Contest.

And she easily blew the other 10,000 contestants out of the water, to take first place in the competition.

She also received a year’s supply of dog food, $1,000 to donate to the animal rescue of her choice , and an appearance on Good Morning America...

As well as sharing her story to hopefully help other animals in her position.

2.4 million dogs are sold here in America each year...

Lamb Chop started out life in a puppy mill, where she stayed for more than 6 years, used by illegal breeders to give birth to litter after litter.

″When she was rescued, local vets had to remove all of her teeth because they were rotten,″ Schubert said.

It was clear that Lamb Chop hadn't been properly cared for, and as a result of medical neglect, the tiny pup also suffered from cauliflower ear as well as needing several tumors removed.

Luckily for Schubert, the medical expenses were covered by the Washington County Humane Society.

″I couldn't bring her home right away, because she had to have all of those surgeries, and Washington County used a significant portion of their medical fund to take care of her,″ Schubert says. ″I am really thankful for that. They are a small, little shelter that I think does really great work with animals."

When Lamb Chop was first brought home she was scared of people and didn't know how to behave like other dogs. Thanks to Schubert, that's all changed...

″I can go grocery shopping and come home, and she’s just sitting there happy and waiting, unlike when I first would leave her,″ says Schubert, who enrolled Lamb Chop in "shy dog classes" to help her build her confidence.

Today they work with a nonprofit called Bailing Out Benji, which teaches people how important it is to adopt instead of shop. And works on exposing puppy mills...

″We always say that in order for puppy mills to close, the public needs to stop funding them through their purchases,″ says Schubert.

Schubert and Lamb Chop even go to pet expos giving talks on pet shops and how they often work with puppy mills behind the scenes.

Schubert says employees will often lie about where the dogs came from which is why it's so important to educate the public about what's really going on. ″Lamb Chop is a supercute face to an ugly industry,″ Schubert adds.

The only sign Lamb Chop was ever part of a puppy mill is her tongue that flops out playfully, due to her losing all her teeth.

Schubert says this is often what brings people over during her talks.

Schubert has even started an Instagram page for her...

″I did start an Instagram page for her, so we can use that platform to educate virtually,″ Schubert adds.

″She is still shy, but we’re working on that, and I think with treats and people’s patience, she will be anybody’s best friend.″ Schubert said.

″I always tell people that I think she is super brave and resilient, given what she has gone through,″ she says. ″She has an amazing joy for life."

It's amazing that Lamb Chop was given another chance at life...

It just proves how important it is to adopt instead of shop! Keep scrolling for more adorable animal news, including the adorable connection one woman had with a stray dog...