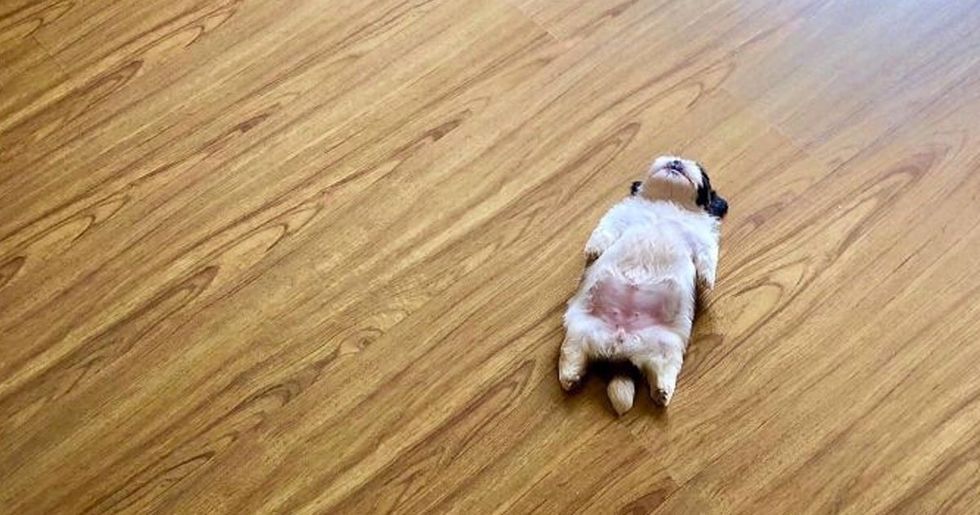 Everyone loves dogs. Come on, you can't deny it. When a fluffy little pooch walks past, you can't help but gush over its overwhelming cuteness, can you? I, for one, am a huge fan of Siberian Huskies. However, another breed has recently taken the spotlight with one pup showcasing her ability to look like she's been "turned off" when she sleeps; she's very cute!

A Shih Tzu named Paningning has gained some attention on social media and not just for the usual reasons that puppy gains attention for. Instead, her attention stems from the hilarious, yet extremely adorable, positions that she lies in! - though her smile is extremely cute too!

It all started when her owner, Janess Cua, shared some photos of her pet in a 'Dog Lovers' group on Facebook. They ended up being shared all over the platform and eventually reached Instagram, wherein Paningning's official account has over ninety thousand followers! Check out thirty of my favorite pictures of the puppy and some of her friends! Try not to become too obsessed with them!

1. The cutest of the collection.

This has to be one of my favorites from all of the pictures, and there's over two hundred! Other users think that it's the most adorable too. @melika969 says: "Her pictures never fail to make me smile". Same, Melika, same.

2. She has most adorable smile!

The best thing about this picture is the caption that came along with it. It seemed as if it was a little message from the puppy's owner. It said: "Because of your smile, you make life more beautiful. ❤️ " Aw!

3. You can't deny how adorable she is!

This one is similar to the one before, but look at the fetal position she's in! Ah!

4. @fajer_bushager commented: "This is tooo much!"

I agree. Look at her little legs!

This post perfectly describes how I feel at the end of a long day...

6. Who doesn't love a little spoon?

7. Take a look at this adorable picture...

Everyone commenting couldn't help but gush over the puppy's infectious smile!

I'm telling you, that smile is infectious!

9. And here's a picture of her just chilling on a banana bed.

10. But even Paningning seems to have haters!

The caption on this picture read: “You can't wake a dog who is pretending to be asleep" with the eye-roll emoji - a nod towards those who believe that the dog is not actually sleeping in any of the photos. Does it really matter? She's cute. Argument over.

A photo of Paningning being cradled in the arms of a human is something that I didn't know I needed, but I did.

12. My two favorite things in one photo.

Pizza and puppies are a lethal combo. I love it.

13. Paningning's outfits change based on her mood.

The caption on this one reads: "Summer I’m ready ?" She's laying down while sporting a cute sundress - adorable or what?

This one's hilarious! Look at the size difference!

15. Her little outfits only make her cuter!

Paningning has become so popular that she's released her own line of merchandise, including T-shirts and badges.

Here she is sleeping with some of her friends!

Doesn't she actually look as if she's been turned off?

19. How does this puppy even exist?

I want my own Paningning!

20. Another good example of how I sleep after a long day at work...

She manages to capture all my moods in one picture.

The two shih tzus have such a good relationship.

It is pretty cute, so I do see why.

Paningning is sleeping the day away...

But to me, it's just double the cuteness!

Here's a nice shot of Paningning just chilling with a purple bow in her hair.

26. Clearly, she likes to sleep with her mouth open.

Here's an adorable little close-up of Paningning when she's asleep...

Apparently, that's what the little pup was trying to say.

28. I told you her smile was the selling point!

User @hey_chingy couldn't help but comment on Paningning's little baby teeth saying that they are "so adorbs", which they are!

And, obviously, I had to include one more picture with the banana bed, but, this time, the pup has decided that she would rather sleep on the floor.

That smile, that tutu, it's too hard not to smile when looking at this picture! There are plenty more on Paningning's Instagram page so you can head over there for some more adorable content!
20%