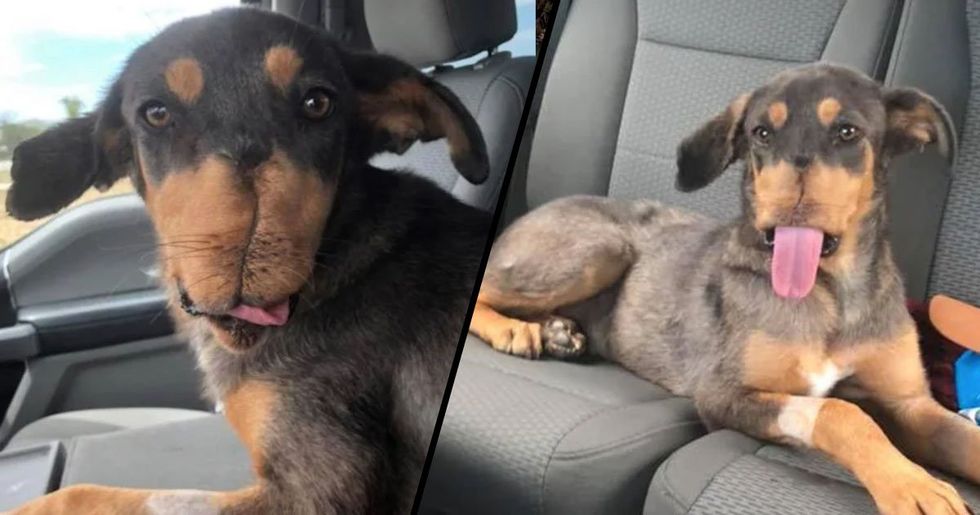 As we have discovered, this world can be a pretty horrible place. And, with every horror story that emerges, it just seems to get worse and worse. You would think that, in such a progressive society, we would have moved past hurting animals for no reason, but some people just clearly haven't gotten the memo.

It saddens me to tell you about this story of a puppy who was left to die after some evil people put firecrackers into his mouth. Yes, you read that right - people can be that evil - but this tale does have a silver lining to it, so keep scrolling to find out every single detail...

The "Saving Huey Foundation" received a distressing call in April.

The company, which works against animal cruelty, received a call from another charity organization in Mexico who had stumbled across one of the most horrific things they had ever seen.

Located in Sonora, Mexico, this organization was in dire need of their help.

A dog named Braveheart had been found with blood pouring from his face. His nose, mouth, and jaw had been blown off of his face after a group of evil people decided to stuff firecrackers into his mouth.

It was horrific, as you can imagine.

The pictures that were taken of the puppy after the incident were too graphic to include in this article, but can be found of Facebook on the official "Saving Huey Foundation." But, if I were you, I'd refrain from viewing them.

Initially, the charity thought that Braveheart would have to be put down...

After seeing many severe animal abuse cases throughout their active years, the foundation didn't expect the puppy to survive such an ordeal, they expressed in a Facebook post.

But the medical professionals had some good news.

"The Good Samaritan who found this dog immediately took him to the vet, believing he might be able to save him. I was on standby and prepared to help this sweet boy, but only if the vet could convince us that this damage could be fixed."

The vet managed to save Braveheart's life...

Even though the bottom of his jaw had been completely blown off, they said that there was still enough of it left for the puppy to be able to eat and drink.

There was also severe damage to his nose and nasal cavity...

But the doctors had been able to clear the cavity of necrotic tissue as well as sew it back together with a prosthetic jaw.

The puppy was left hospitalized.

At first, there was no specific timeframe that he would remain in critical condition for because the vets didn't know. But, miraculously, he managed to make a full recovery.

The "Saving Huey Foundation" also covered all of the medical bills.

This included all the ones in Mexico, as well as the U.S. The foundation is run by Tracey Lystra, a forty-four-year-old who had dedicated her own life to saving animals who are in need.

And Braveheart was no exception.

Tracey immediately warmed to the little pup and, since the surgery has been complete, everyone that has come into contact with Braveheart manages to get their heart stolen by his adorable and loving nature.

With the donations of other people who had heard about the case, Braveheart's life was saved.

This is what Tracey had to say: "I had never done any rescue in that area so was unsure of the vets out there but a friend told me about Dr.Briseno, who thought he could help, so was taken there and ended up having four surgeries. A new jaw was made for Braveheart, and he stayed at that practice for two months until he was healthy enough to make the 11-hour drive to us, he has been with us for two months now."

Braveheart managed to beat all of the odds, despite them being stacked against him.

"Shortly after coming to us he had the tube removed from his nose and this seemed to alleviate a lot of discomforts. Vets here had no idea what it was, and we nearly lost him but he has made a remarkable recovery."

And now, the little pup is waiting to be adopted...

I mean, after hearing all of the lovely qualities that the pup has, you'd be crazy to not want to adopt him.

This is how Tracey described him:

"Braveheart is an amazing boy who loves people and other animals, he still gets a little too excited when he meets new friends but he’s learning not to jump on them."

She also felt very strongly about those who had committed this heinous crime.

"I would be lying if I said that late at night, I didn’t have awful thoughts as to what I would do to the people who commit such crimes. I am able to take a lot of what I see and hide it from my emotions, but there are times it definitely catches up with me."

And others have also taken to Facebook to express their disgust.

There were countless comments on the post such as this one.

Other people were just so happy that Braveheart was getting the help he needs.

And everyone else was too busy donating towards the cause.

Approximately sixty-nine individuals from all over the globe had donated to the cause. They raised over 1,700 dollars! And with everyone's help, Braveheart is now happy and healthy!

Recently, the foundation released a post saying that they had a lot of positive feedback for Braveheart.

Apparently, a lot of people are wanting to adopt the now fully-recovered pup, so this story does have a happy ending!

And if you want to read about another puppy-rescue... then just keep scrolling.

This horrific incident involved a puppy being buried alive by a knife-wielding lunatic. Thankfully, he was eventually rescued by a group of brave individuals...