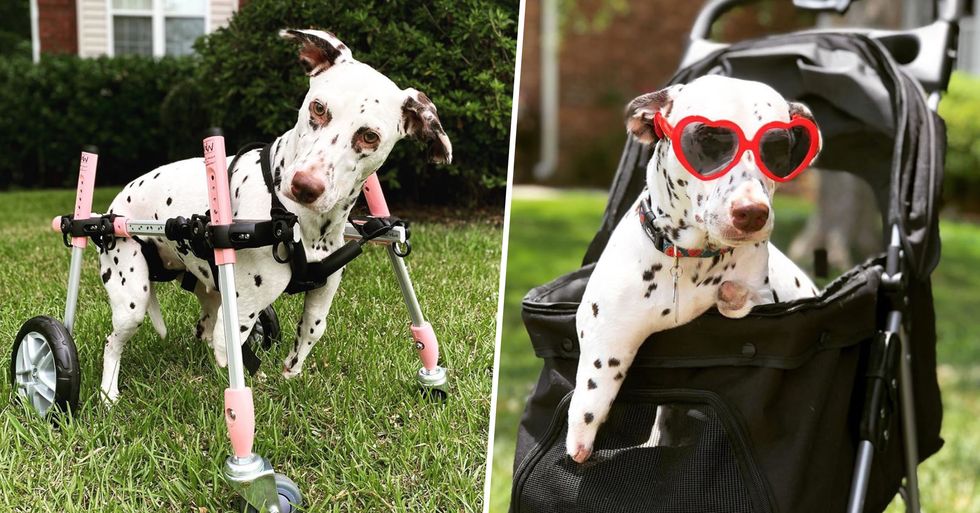 Hundred of dogs sadly face the atrocities of a dog meat slaughterhouse.

It's a situation that we may think we cannot do much about, but we can...

One puppy has been rescued by an avid dog lover. These pictures are so heartwarming.

And many have gone on to be rehomed with loving families. Just like the Dalamation puppy, Emma Roo.

Emma Roo was just eight weeks old when she was saved from a dog meat slaughterhouse where two of her legs were cut off.

Now, three-years-old she has been rehomed and adopted by dog lover, Misha Rackcliff Hunt, 27, from Charleston, South Carolina.

Emma was rescued from a slaughterhouse in Xi'An, China, in 2017.

At the slaughterhouse her two front legs had been removed, ears shaved and part of her tail was gone. The process of removing dog limbs is often done without anesthetic as it is believed to make them produce adrenaline which will make the remaining meat tender.

Thankfully, Emma was rescued and taken to a veterinary practice in Beijing.

It was there that a small toe defect was discovered, the reason thought to be why breeders discarded her.

Following her rescue, Emma was then rehomed.

But sadly, just two years later in 2019, she was returned back to the clinic.

Aware of the demand for rescue dogs abroad, rescue groups sought out Dalmatian Rescue, a non-profit organization in South Florida.

And that's where Misha and Emma met...

The Daily Mail reported that Misha said, "I remember first seeing Emma online – she has the most human-like amber colored eyes. I didn't even think about the logistics of it. I knew this dog was sent to me for a reason."

Emma arrived in the US on January 28, 2020, which fortunately was just before the export of animals was banned due to COVID-19.

Misha explained that "When I met her, I thought she might be cold or not interested in people from the trauma but she came up straight into my arms. "By the time we finished our five-hour road trip home, it's like she knew I was her person and that I was never going to leave her."

"When I first brought her home, she would scream at the top of her lungs whenever I left the room. She was always protective over her food and toys. At one point, she would even guard random pieces of my clothing because she was scared that it would be taken away."

"Due to the nature of her injuries, we know that they were human inflicted. This is apparently common with 'rare' breeds who are dismembered and tortured,' Misha said. "Emma has a fear of any chainsaw-like sounds such as hair dryers, vacuums, and lawnmowers."

"She has a couple of missing toes on her back paw which a vet determined to be a birth defect so it's thought she was discarded at a young age as she wouldn't be sold or adopted."

Emma is now recovering at home with Misha and it is going really well.

Emma now even has some custom-made prosthetics by Bionic Pets after Misha was put in contact with them by the non-profit organization Joey's P.A.W.

Emma's even managed to gain a following of her own, with almost 10,000 followers of her Instagram account.

Emma said, "It's beautiful to see how much Emma's personality started to shine through a little more with each day."

"Emma has struggled with her cart and prosthetics because of the way she carries her body so we go to a local dog pool for water therapy. She has a massage to help with the tight muscles in her back. "She now loves to play catch and with her stuffed toys, and she's very well behaved around other dogs at the park. She's now realizing there's a whole world of activities out there."

Misha and Emma are using their social media platforms to raise awareness of the dog-meat market and remind them that it still exists.

They've created t-shirts stating, "Stand up for those who can't" and the money raised will be donated to organizations working to stop the industry.

"I'm just someone who believes that every dog deserves a chance no matter their circumstances", Misha said.

"We're not the heroes, the dogs are the heroes. Don't be afraid to ask for help. There are organizations out there who want to help you to give your dog the best life possible."