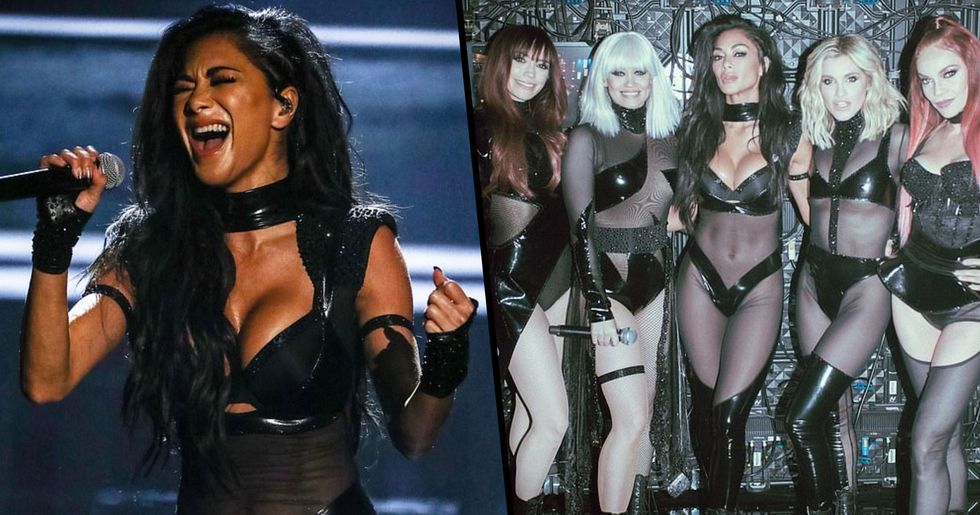 It seems to be revival and reunion madness at the moment. Whether its the Spice Girls hitting the stage once more or the iconic Lizzie McGuire returning to screens, several familiar faces are getting back together in the name of nostalgia.

The latest comes from '00s superstars, Pussycat Dolls, who had some very exciting news to share last week...

Fans of the girl group went crazy when it was announced that the "Don't cha" hitmakers are set to reunite... it's only taken them a decade! It's also taken quite a hefty amount of cash to persuade these ladies to get back together, although one famous face is set to be conspicuously absent.

But their long-awaited debut performance over the weekend has caused quite a stir. Keep scrolling to see the video...

Well naturally... everyone's young at some point. Unless you were born old, like Brad Pitt in The Curious Case Of Benjamin Button.

Forget rubbing bods against walls and smoldering glances towards to cameras, something we endured from other girl groups in the early '00s. The Pussycat Dolls were a group that was designed to dance. The girl group, hailing from Los Angeles, was as much a dance troupe as they were singers.

Antin actually thought up "The Pussycat Dolls" in 1995 as a burlesque troupe. After the act gained widespread acclaim, the concept was bought up by A&M Records. This was when Nicole and the girls were roped in and The Pussycat Dolls that we remember today were born. Robin Antin remained involved as the girl group's choreographer.

Their self-titled debut album was released in 2005 and sold over 3 million copies in the U.S. alone.

One of the group's most successful tracks you might remember was "Jai Ho! (You Are My Destiny)." Inspired by the song at the end of the hit movie, Slumdog Millionaire, The Pussycat Dolls took the melody and made their own version. But, despite the song's success, the group went on a hiatus shortly after.

So, have you kept up with all of The Pussycat Dolls for the last ten years, or have some of them slipped off your radar?

Although the band, which consists of Bachar and someone called Sammy Jay, doesn't seem to have had much commercial success. Their music really isn't bad. But it's certainly a big step away from the music that Carmit Bachar was making alongside The Pussycat Dolls.

Ashley Roberts has done the rounds on U.K. reality shows.

Roberts appeared on I'm A Celebrity Get Me Out Of Here in 2012, which she almost won, but finished as runner-up. Then, in 2015, she appeared on the British ski slope show, The Jump.  By this point, Roberts had become a familiar face on British television and landed herself a role co-hosting the popular Ant & Dec's Saturday Night Takeaway. She worked on the show from 2013 until 2016, securing her place as a family favorite presenter.

Roberts and Scherzinger aren't the only Pussycat Dolls that have done a bit of presenting. Since the girl group went on hiatus, Sutta has also dabbled in presenting. You may well have caught Jessica Sutta on the 19th cycle of America's Next Top Model, where she starred alongside other ex-girl band member, Nadine Coyle, from U.K. pop group, Girls Aloud.

Like many of The Pussycat Doll members, it seems, Wyatt has moved permanently to the U.K. She is married to the British model, Max Rogers, and the pair now have 2 children.

Perhaps the most prestigious cooking show in all of the U.K., winning Masterchef really is a highly respected achievement. Wyatt won the coveted award when she partook in 2015.

Of course, everyone knows that Nicole's been busy...

The Pussycat Dolls' frontwoman, Nicole Scherzinger, hasn't had a minute to herself since the group went on hiatus. It was, in fact, Nicole's busy schedule that's been rumored to be the reason why it has taken a decade for the group to reunite.

With all the Pussycat Dolls with their fingers in different pies, and working on completely separate projects over the last ten years, is it really true that they are getting back together? Surely, the time of The Pussycat Dolls is over... are there not younger, fresher faces that people would rather see?

Rumor has it, Nicole agreed to go on The Pussycat Dolls tour after being offered a million dollars.

And now the reunion tour has been confirmed.

The band is set to embark on a tour of the U.K. and Ireland, beginning in April of 2020.

But sadly, it won't consist of the whole band.

One Pussycat Doll, Melody Thorton, is surreptitiously absent from the lineup.

We're still very excited! Reunions seem to be the flavor of the month at the moment.

But it's not all good news.

Her routine has been branded as "inappropriate."

@ITV @pussycatdolls @TheXFactor The outfits were disgusting pre watershed and find it disappointing that @itv have… https://t.co/cKqlWd5moK
— Beverley (@Beverley)1575146133.0

It was the first time the Pussycat Dolls had reunited in over ten years and they made one helluva entrance back into the limelight.

The girls were wearing mesh outfits.

Or mesh and leather if you want the specifics - and many folks felt like the costumes left too little to the imagination. To top it off, they had a very suggestive dance routine which concluded with the group being super-soaked with water.

One wrote: "It's disgusting and kids are watching this. Why is it okay to wear stuff like this and dance provocatively in front of kids... It's disturbing," while another added: "Whoever thought those outfits were a good idea for the Pussycat Dolls needs the sack. It's 8.15pm. Kids are awake. There's no need for us to see half-dressed women, ever, let alone on family show at this time. It's disgusting and misogynistic."

In fact, the routine has caused so much of a stir...

That it sparked a staggering number of complaints to Ofcom (the British TV regulator).

A whopping 419 people complained to the broadcasting regulator regarding the band’s controversial routine, which puts it on course to be one of the most complained-about TV moments of the entire year.

Check out the routine for yourselves below.

Do you think it's inappropriate? Keep scrolling to learn more about what happened when the whole cast of Parks and Rec reunited. Hint: the pictures will make you squeal.