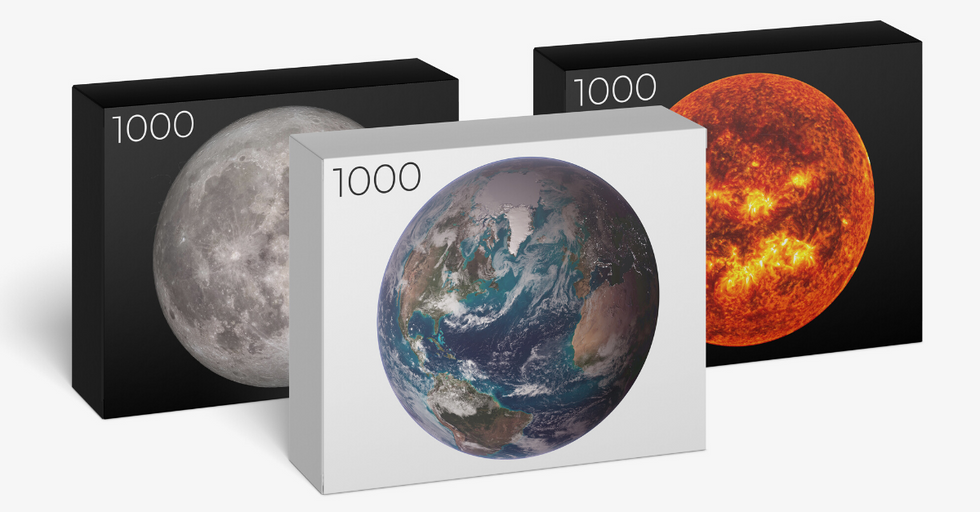 Most of the population has been spending more time at home lately, and if you're anything like us, you may be looking for some new hobbies by now. Puzzles have been experiencing quite a resurgence in popularity while we're all stuck inside. We can imagine you've already done quite a few and you're looking for a challenge. You can bust through a 500 piece in no time. You want a puzzle you can really dig into.

We've scoured the internet and found the juiciest, trickiest, most impossible puzzles around. If you're looking for your next big puzzle project, keep reading to find a puzzle that you'll love. And hate. And love to hate because honestly some of these guys are nearly impossible. But isn't that why we love to try them?

Just an FYI: we participate in affiliate programs, and may receive a share of sales from links on this page.

For our first impossible puzzle we present:

One thousand nearly identical pieces. Teeny tiny all black pieces. One reviewer says "This is a very frustrating puzzle, border-lining evil.... several pieces are a close fit so you have to be very careful and patient."
Buy Now

You know what kind of looks almost the same all over?

The moon. It's the same two flipping colors and has no discernable pattern, so good luck with getting this one completed. It's basically impossible.

Oh you don't like all black? What about all clear?

Yes, we do mean see-through pieces. Which means you get absolutely no indication about how the pieces go together except for their shape. Truly cruel.
Buy Now

Hey remember when we said the moon is impossible?

Maybe you're not so much a moon person. That's ok! We've got you covered with this just-as-challenging sun, which again is variations on the same color in fairly random patterns. Good luck.

Beautiful colors in a lovely mandala pattern give you 1000 pieces of serious challenge.
Buy Now

Ok maybe sun and moon are a bit tootricky.

This celestial body has a bit more variation: our very own Earth. But it is still 1000 pieces of swirls and swoops, so "easy" is not how we'd describe it.

According to one reviewer this beast is "Crazy hard. Good puzzle, but crazy hard." Others suggested it was relaxing, but I don't trust them.
Buy Now

For the animal lovers out there, you can work on tons of animals while trying to solve this nearly impossible puzzle.
Buy Now

But someone out there wants 3000 pieces of cars and this puzzle is the right one for them. Even if it takes months.
Buy Now

This one is deceptively challenging...

Even though it's "only" 1000 pieces, the color scheme is so similar through all of it that it truly ups the challenge rating. Plus you get some beautiful art at the end.
Buy Now

There are two particularly devious elements to this puzzle: it's almost all in the same two or three colors, and the repeating trees will leave you wondering if your piece goes in this tree or one of the other nine. Evil.
Buy Now

Which is why the intricate, looping designs that make up almost this entire puzzle are the worst. Everything looks the same!
Buy Now

Like this one, to which one reviewer said "Great vivid colors and a challenging puzzle. Worthy of gluing and framing."
Buy Now

This NYC puzzle is truly a doozy. But if you're missing the views and the great outdoors, it's 2000 pieces of reminder.
Buy Now

Hold the phone. This puzzle has how many pieces?

Yes, the answer is 5000. I personally would never be buckwild enough to attempt something of this magnitude, but if you're a truly committed puzzler, this one is for you.
Buy Now

There is one reason this puzzle is impossible.

And yes, it is that bookshelf. So much detail, so little order.
Buy Now

Sometimes you need something beautiful to cut through the frustration.

For the fantasy lovers out there, this girl and dragon is a lovely image. But it is all in shades of green, so good luck with that.
Buy Now

Only this time the pattern isn't repeating, it's got random colors on it. Just to throw you off. Fun, huh?
Buy Now

Or at least they are when it comes to puzzles. How are you supposed to tell one stripe from the other? Magic I guess.
Buy Now

Who created this monstrosity?

Ok sure it's not as big as some of the other puzzles, but it is hundreds of repeating Mickeys. HUNDREDS.
Buy Now

Let's get back to something calming.

This time in black and white, we've got a chill mandala for you to try out. 1000 pieces of definitely-not-frustrating mandala.
Buy Now

Everything is better with tons of dogs. Even impossible puzzles. So why not snag this dog-filled puzzle and see how well you can finish it?
Buy Now

Ah what a tranquil scene.

It might be less tranquil when you chuck one of the pieces across the room because this puzzle is so impossible. But fun!
Buy Now

A double-sided puzzle. If you think that will make it easier, think again because it is in fact that same art on both sides. You'll never stop seeing dalmations.
Buy Now

What a lovely field.

Full of what looks like basically the same bush repeating over and over and over. Can you tell the bushes apart? I sure can't. If you want to try, you'll definitely want to get this 1000 piece puzzle.
Buy Now

Ooh now this one is gorgeous.

Each feather is just a little bit different, which means a keen eye will be able to compare to the box. But that would be a very keen eye indeed.
Buy Now

And why do they want to hurt the world? Because I can't think of any other reason to create a puzzle of water. It's actually evil.
Buy Now

What a beautiful sky full of stars!

Or at least it's beautiful until you're trying to place each of those tiny little stars in a puzzle.
Buy Now

For the opera lover.

We give you a full 3000 pieces of opera posters. You better be very committed to the opera.
Buy Now

And now the king of impossible puzzles.

40,320 pieces. Yeah, you read that right. The biggest Mickey puzzle in the world. If you complete this beast you can call yourself a puzzle master. Good luck.

Lastly, if you enjoyed those mind-bendingly tough earth, moon, and sun puzzles, you're in luck! You can buy them as a set!

Can't decide which one of these stunning puzzles to buy? Now you don't have to, thanks to this three-piece set! Once completed, these puzzles look oh-so striking when framed and hung up in an office, living room, or even a space-themed nursery.