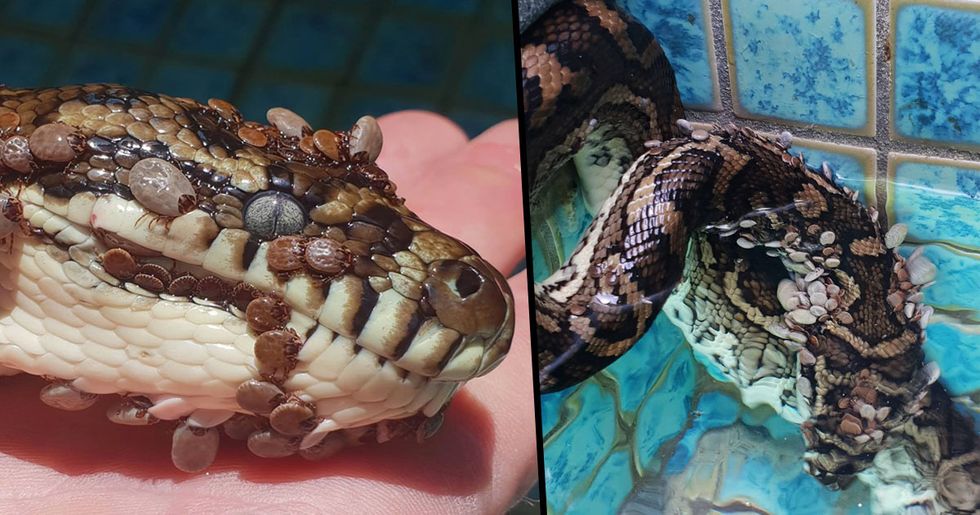 It's yet another day in sunny Australia.

Snakes might not be the most sympathy-evoking creatures on this planet, but seeing this python struggling with so many parasites on it that it can barely see is heartbreaking. Even some people with snake phobias have shared, after reading the news, that they actually felt bad for the python.

It's amazing how a snake can make you feel so grossed-out, yet so sympathetic towards it.

Over 500 ticks were found on this poor guy, Insider says. The snake was literally being eaten alive.

But the story of Tony Harrison, 51, who saved the python, is just as incredible. Tony has been obsessed with reptiles since he was a child. Naturally, he grew up to become a professional snake catcher and started a family that is in love with reptiles too.

The poor python was really lucky to be rescued by Tony and his family.

This carpet python was found in a backyard pool on Thursday in Coolangatta, Gold Coast, Australia.

Insider reports that more than 500 paralysis ticks were found on the snake. But the python is likely to survive.

Tony posted a Facebook live video of the python rescue which got a lot of attention.

"What happens is, in Mother Nature, animals can live in harmony with parasites, both internal and external," he said.

"If something happens to them, the parasites get the better of them. He's got hundreds of paralysis ticks on him. That's why he's in the water; he's trying to drown them."

When Tony got the snake out of the pool and took a better look at it, he added, "I've done this for 26 years, and this is the worst I've ever seen."

“Here in Australia you often will see an animal, a dog or a cat, with one tick, but here is a snake that has 511 of them so it’s amazing they’re still in one piece."

"It was horrifying, because I’ve got a bit of a phobia of those ticks to start with," Tony said, according to ITV.

"Obviously, [the snake] was extremely uncomfortable."

"Its whole face was swollen and blooming and it was completely overwhelmed by the ticks breeding on him," he added.

He took it to Currumbin Wildlife Hospital for the vets to remove the ticks. It took hours to remove all 511 of them.

Tony said that getting the snake out of the pool and handling it felt like "holding a bag of marbles that were moving under [his] hands," BBC reports.

"There are still tiny young ones under the scales that will be treated with drugs to kill them," Tony later updated his followers on Facebook.

But he's very confident that Nike will recover fully.

BBC reported that "snakes often pick up small numbers of ticks or other parasites in the wild," according to Associate Prof Bryan Fry, University of Queensland.

But because Nike had so many of them, the python must have been ill already, most likely due to "heat stress or drought conditions."

"Clearly it was a seriously unwell animal to have had its natural defences so broken down," Associate Prof Fry said.

"I doubt it would have survived if it hadn't been taken out and gotten treatment."

Turns out he was right. Tony later shared on Facebook that Nike was actually suffering from an infection.

"Nike is a bit more sprightly today." "[But] he will be a long term patient [at the Currumbin Wildlife Sanctuary] until he is well enough to be released."

ITV says Tony has been interested in reptiles since he was 6 years old.

During his career, he has come close to dying 3 times. He has been bitten by "Red-bellied black, Rough-scaled and Eastern brown snakes, some of which are regarded as the deadliest in Australia."

"The Eastern brown - I barely felt anything, but I nearly died and had blood clots on the brain." "[With] the rough-scaled... [my] chest tightened and my whole body puffed up." "But I’m lucky in the way that I do [snake catching] with my son and my other half."

Tony works together with his partner, Brooke Smith, and his son.

They make videos and take photos of the reptiles they find and post them on Facebook and YouTube. "All three of us do it so we’re not missing out on anything," he said.

“It’s also good in the way people love you when you turn up and remove the unwanted visitor from their yard."

"They really think you’re a bit of a god because the fact is you’ve just saved their life."

Tony started working as a snake catcher in 1994.

He says on the business' official website, "As a child I found I had this strange obsession for critters; this led to me spending all my spare time crawling around the garden looking for little lizards, Bearded Dragons and Blue Tongues."

"All the knowledge I had was from a handful of books my family loaded me with each birthday and Christmas, and the stuff I had taught myself along the way by trial and error."

"One day we decided to move to sunny [Queensland]."

"At this stage, I was trying to kick off my own small business of charter fishing when one night, a neighbour came running down screaming about a monster in her yard."

"I ran up to see a beautiful carpet python chopped up into bits."

"I was horrified at the ignorance this person was displaying! I asked why she had not called a snake catcher? She said 'There aren’t any.'"

"From that point on, the wheels were in motion for me to acquire the appropriate permits to do this, just to save the life of the snakes!"

"Well, I started to get the odd call here and there, then it bloomed into a few per day, as my name as a catch and release rep spread."

"This was great but for two or three months of the year I would have very little work due to winter."

"So I decided to use this quiet time to help educate the public about these awesome creatures that we all live with. So ‘Reptile Relocation And Awareness’ was born!"

"I know that if I could educate the public in the right way, these incidents with humans and critters we hear about all the time would be reduced down to nearly none."

"So whilst I’m alive I intend to spend every waking moment doing exactly that!"

Surprisingly, after reading the story of the poor python, people almost unanimously felt really bad for him and wished he would heal quickly. But there were some grossed-out ones too.

Angie Ng said, "First time I've felt sorry for a snake." Does she mean that literally or metaphorically, though?

Riles Riles Shoot: "[Watched] this just before having my lunch. I'm full now."

Karolina Panico: "Am I the only gross weirdo who wishes there was a video showing them removing the ticks?? That would just be so freaking satisfying." Yes. Yes, you are. Thanks for the image.

Andrew Shoemaker: "I bet that snake was ticked off."

Eereena Ro: "Hey, let’s acknowledge the genius snake for knowing they may drown."

Salvatore Di Amore: "Australia's bugs are so dangerous even snakes get fucked up."

Dana Carina: "Am I the only one who thinks that it is pretty disproportionate to kill 500 animals for only one?"

Elsie Morris Thomas: "Wouldn't happen if the snake had a gun. Edit: I hope you know my comment was a joke. Edit 2: for the people who don't understand my comment is a play on when anyone posts a news story about something happening to something there's always that one comment of someone saying "wouldn't have happened if this had a gun." I don't actually mean we need to arm snakes with guns, jeez."

Brendan Hawks: "One of the most Australia things I’ve seen in a while."

Christina Jo Moss: "I can’t handle snakes. But no animal deserves this. Ticks are disgusting."

Marianny Escaño: "I don’t know what’s worse: the fact that there’s a snake in the pool or all the ticks that could be in their house."

David Garrison: "Where the hell does one find over 500 ticks? I would be worried where that snake went to have that many." Teddy Gallagher: "They can bread on the snake." Some types of information are too much information.

Callie Crider Barbieri: "Reason number 472 why I will never go to Australia."

Amber Redfield: "Oh, the poor baby. I work with snakes daily, and they’re one of my favourite animals. Amazing that the snake instinctively knew how to drown them. Amazing, amazing animals. Thank goodness this guy will recover!"