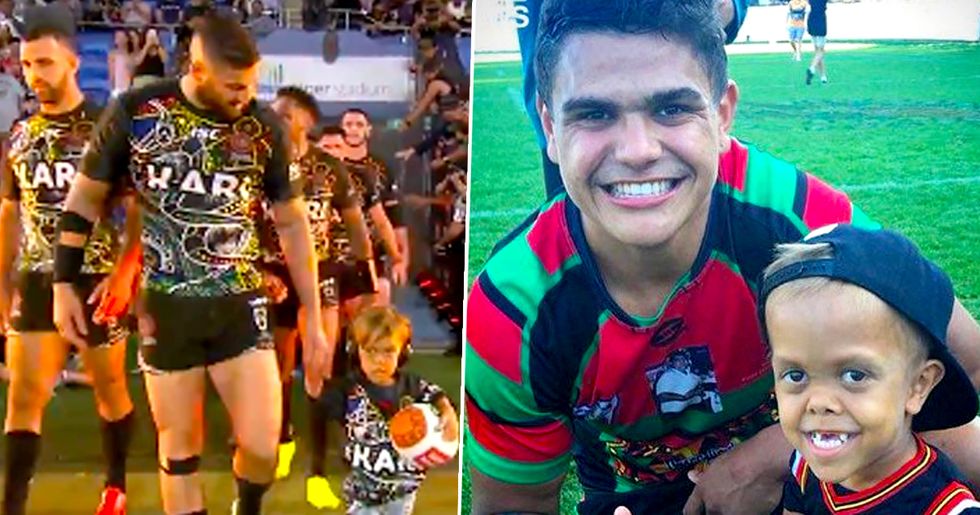 Quaden Bayles Leads out Indigenous All Stars at NRL Match

This week, heart-wrenching footage of a little boy driven to the brink of suicide from relentless bullying went viral, thus shattering the hearts of millions of people all over the world.

There has been an outpour of love and support for the youngster, from members of the public and celebrities alike.

Now one of Quaden's dreams has come true as he walked out his favorite NRL team onto the pitch carrying the team ball...

Keep scrolling to check it out.q

But there is some good news.

Earlier today Quaden walked out his favorite team - the Indigenous All Stars - onto the field for their NRL clash against the Maori All Stars at the Gold Coast.

He carried the match ball.

With a huge smile glued to his face, Quaden carried out the match ball onto the pitch and was met with a roar of applause from the entire stadium.

He was in his team's jersey.

Clad in the Indigenous All Stars jersey, the nine-year-old proudly shook the hand of every member of the Maori squad before carrying the ball onto the pitch and handing it over to the referee.

Hopefully we can all learn from this.

Update from the @NRL on Quaden Bayles. At this stage, Cody Walker will bring the 9-yr-old into the Indigenous… https://t.co/UyTmJP4fyM
— Dominique Loudon (@Dominique Loudon)1582178986.0

Nobody likes bullies and when the world learns of bullies they do everything they can to stop them.

And hopefully now you know that there are far more people out there who care for you, than those who do not.
20%