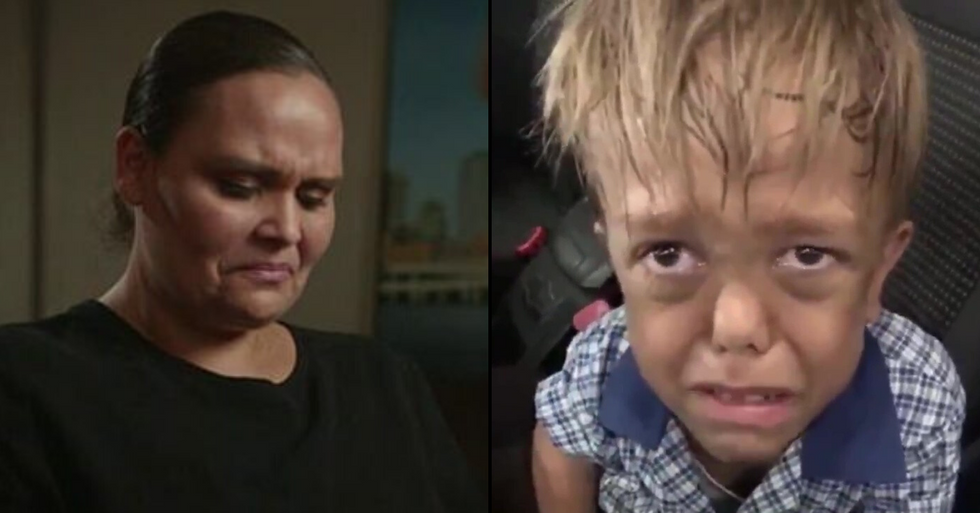 Quaden Bayles was catapulted to viral fame last month after a heartbreaking video of him saying he wanted to die as a result of constant bullying was posted to Facebook.

And now, Quaden's mom has revealed exactly what happened that caused her son to suffer from a complete breakdown in the now-famous video.

She shared the post to warn others against the dangers of bullying.

In the distressing video, he says: "Give me a rope, I want to kill myself" and "I just want to stab myself in the heart... I want someone to kill me."

His heartbroken mom can be heard saying:

He was deeply affected by the death of his grandfather and his little brother, who was stillborn. His mother revealed that he thinks he would be "better off with them in heaven."

The response to her original post has been huge.

And incredibly, invited Quaden to walk them onto the pitch at one of their games.

He wanted to send him to Disney Land.

But the Bayles' have decided to reject all the money raised...

And it's for the most heartwarming reason.

But the family decided that the anti-bullying charities need it more than they do, so have vowed to donate all the money raised to those instead.

Sadly, however, not all of the reactions to the video of Quaden have been good...

on one hand that bullying video got me in my feels regarding 9 y/o Quaden Bayles on the other it's odd his mom fil… https://t.co/n5IsIldGTA
— Saara Mowlana (@Saara Mowlana)1582624663.0

Some people said they found it odd how his mom filmed him instead of comforting him. "it's odd his mom filmed and posted it rather than calming and consoling him first," one user wrote.

But now, his mom has spoken out about her decision to film her son...

The pair were interviewed together for a special edition of The Point.

During the interview, Quaden's mom chats about her decision to take the video.

And revealed she has "no regrets" about posting the clip to social media. "Everything that's happened, no regrets. I still stand firm with what I've done," she explained.

"But I know next time I'll have the tools to be able to manage and improve on the way I have dealt with it."

"That was coming from an exhausted mom, a drained mom, a mom that is looking for help.

But many have been wondering...

What exactly happened to tip little Quaden over the edge like that?

Well, his mom has now revealed exactly what it was that caused Quaden to descend into complete and utter turmoil...

And it was all thanks to the actions of some of his classmates.

She explained how it was Quaden's third week back at school after having some time off to be at a family funeral in Sydney...

And, on the day of the video, Quaden's favorite basketball team, The Brisbane Bullets, were visiting kids on campus.

But, despite his excitement...

Yarakka recalled how, upon picking her son up from school, he seemed a little out of sorts and "uneasy."

It turns out that, while Quaden had been queueing to get his jersey signed by the team...

These girls were taunting Quaden...

"Apparently there was a new student who wasn’t aware of Quaden’s condition and she’d been making remarks ongoing and Quaden just had had enough at that time."

And, with nowhere to escape to...

Quaden had to stand as the girls humiliated him, mocked him, and patted him on the head.

“When me and my daughter witnessed that – just the patting him on the head and a couple of other little girls making references to his height and laughing about it – he was very uncomfortable."

And it was when Quaden finally returned to the car when the famous video happened...

Yarraka wanted to go and confront the girls herself, but Quaden had apparently asked her not to. Plus, she had something much more important to do - Console her crying son.

You can watch the original video of Quaden here...

But please watch this video with caution - It's an incredibly distressing watch.