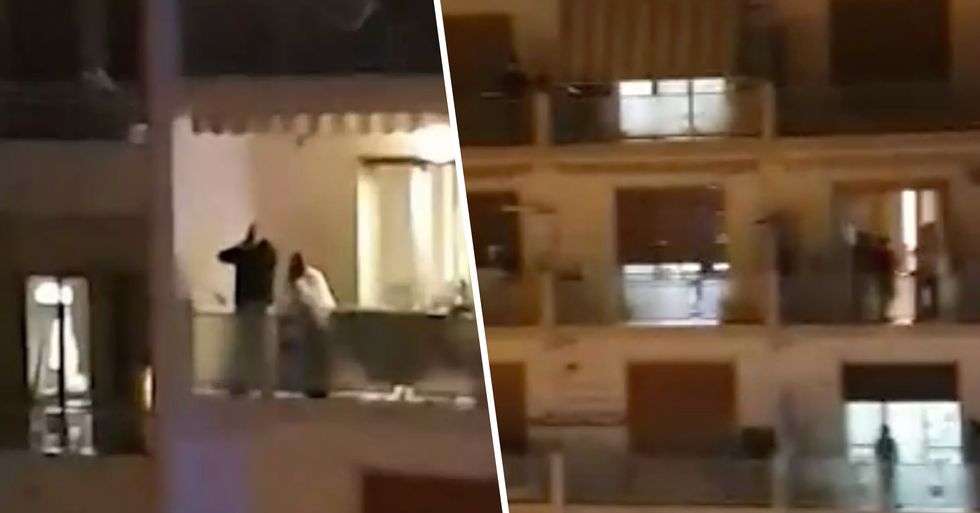 Quarantined Italians Chant 'Don't Give Up' Together From Their Balconies

It's amazing to see people supporting each other in times of trouble. People all across Italy have come together in the midst of despair to share something beautiful.

Scroll to the end to watch the heartwarming video...

It has been confirmed by Worldometer that 5,116 people have now died globally, with the majority being in mainland China. A further 139,016 have been found to carry the virus and be infected.

So far, 1,864 people have been confirmed to have been infected with the virus, and forty-one have reportedly died.

Italy has been hit especially hard.

Life in Italy has ground to a halt after the country went into lockdown to try and prevent any further spread of the coronavirus.

However, humanity can be found even in the darkest places.

A heartwarming video has emerged of an abandoned street in Italy that has left people in awe.

Thousands can be heard chanting.

Italy. People locked inside turn to their windows and balconies singing so everyone feels less lonely. Here is… https://t.co/41AAgauBI2
— Ryan Meilak (@Ryan Meilak)1584104755.0

Footage shared online shows quarantined Italians chanting "don't give up" from their balconies.

They banded together in solidarity.

It was in housing blocks of Casoria commune in Naples where residents can be heard chanting football songs out of their windows, in an attempt to keep spirits up.

They can be heard singing.

"We will stay at home. Tonight the whole of Casoria are united in chorus. The people will never give up so come on Naples!"

They then began to chant songs from a local football team.

This was followed by: "Come on Italy! Come on Naples! Forever!"

Everyone that listened to the chanting was deeply moved.

Singing and chanting have also been filmed in other Italian cities. Sharing the video on Twitter, one woman wrote: "People of my hometown Siena sing a popular song from their houses along an empty street to warm their heart during the Italian Covid-19 lockdown."

“Reminiscent of the chants from Wuhan high-rise apartments early in the epidemic there. Stay strong Italy. Praying for you guys." Keep scrolling for the video everyone's talking about...

There's a reason for the strict measures.

The Italian Prime Minister, Giuseppe Conte, explained: "Restrictions will include banning all public gatherings. There won't be just a red zone. We can't allow this anymore." This measure has been put in place to protect the most vulnerable members of society.

All stores have been shut except pharmacies and supermarkets. Officials have confirmed that cases of the virus rose to fifteen thousand yesterday.