Quavo Announces He Is Now a High School Graduate | 22 Words 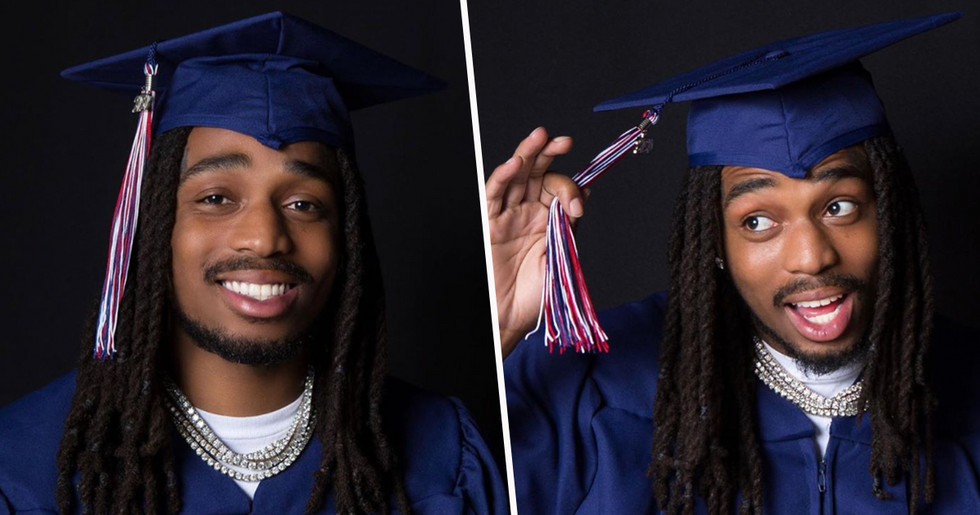 Quavo Announces He Is Now a High School Graduate

Migos star Quavo has today revealed that he has officially graduated high school, after dropping out to pursue a career in music.

Keep scrolling to read more about his incredible accomplishment...

In order to make it big in the world of music, Quavo made the decision to sacrifice his high school education.

It was a gamble, but the Georgia-born rapper had a passion, and he dropped out after co-founding the group Migos, in 2008.

Migos was formed by Quavo and fellow rappers, Offset and Takeoff.

The 3 members are closely related and were all raised together by Quavo's mother - Quavo is Takeoff's uncle, and Offset is Quavo's cousin, FYI.

The boys all saw her as their own mother...

But “she was the father figure," Quavo told Rolling Stone in February 2017. “She knew how to raise you as a man."

Despite their differing personalities, the boys were close growing up.

Quavo and Takeoff began rapping together early on, and they had recorded mixtapes such as Crunk Boy by the time they were in the 8th grade - But their classmates did not see their potential. “Everybody laughed at me," he told XL Magazine in May 2014. And, when Offset spoke up in support of his cousin, Quavo persuaded him to try rapping, too.

The trio went on to release their first full-length project in 2011...

A mixtape titled Juug Season. Since then, they have released a further fourteen mixtapes, as well as 2 studio albums.

And their success has been staggering.

The release of their first single, "Versace", in 2013, catapulted the group into unprecedented levels of fame.

Out of nowhere, the once unknown Georgia trio was suddenly up at the top of the game with some of the biggest names in the industry.

Drake remixed "Versace", causing their track to peak at number ninety-nine on the Billboard Hot 100 chart. Justin Bieber also posted a video online of him singing their lyrics.

Their debut album, Yung Rich Nation was released in 2015...

On top of the release of several more hugely successful singles, such as "Fight Night", "Bad and Boujee", "Stir Fry", and "Walk it Talk it", which featured Drake.

And not forgetting the 2015 single, "Look At My Dab", which ultimately sparked the trend of the "dab" dance move.

Though they didn't invent the iconic dance move, they are credited to have triggered its worldwide fame and popularity.

And actor Donald Glover made this iconic speech at the Golden Globe awards in 2017.

His words, “They’re the Beatles of this generation… There’s a generation of kids, like, the YouTube generation I came up with, that are growing up on something that’s completely separate from a whole group of people. That song, Bad and Boujee, is just fly," sent the world into a complete meltdown, and sent "Bad and Boujee" to the top of the Billboard Hot 100 chart, of course.

And, amid all of Migos' tremendous fame and success...

Quavo went on to feature on several popular songs outside of the group, including "Congratulations", "I'm the One", "Portland", and "No Brainer".

He even released his own solo album.

Subsequently, Quavo has become one of the biggest names in rap today.

The young rapper has gained tremendous recognition over the last couple of years, but there's one thing he never managed to achieve...

Despite his success in the world of music, Quavo never actually received his high school diploma.

The rapper has always been vocal about dropping out of high school just months before graduation...

And he famously rapped the words, "I didn’t graduate, but I know chemistry and science" in the Migos song, "Auto Pilot."

During high school, Quavo was a promising football player.

Throughout his senior year, Quavo’s coach commended his ability as a starting quarterback and he went on to hold the record for most passes in one game.

But, evidently, a sparkling career on the field wasn't on the cards.

And now, aged twenty-nine and stuck in lockdown, Quavo decided to do something about his diploma once and for all.

He has finally graduated!

He shared his exciting news with a series of photos of him wearing his graduation cap and gown, alongside the caption: "Finally Can Say I Graduated High School Class Of 2020. We Lit. Now, What College Should I Go To?" He also added that to celebrate he will be releasing a new track. "And To Celebrate We Gonna Drop SMASH TONIGHT."

Fans have been taking to Twitter to congratulate the rapper...

And have been pointing out that, no matter how long something may take, the only thing that matters is that you did it.

And people are admiring his productivity during these difficult times.

It doesn't get much more inspiring than that, does it? For more inspirational graduation stories, keep scrolling to read about the 9-year-old set to become the youngest college graduate...