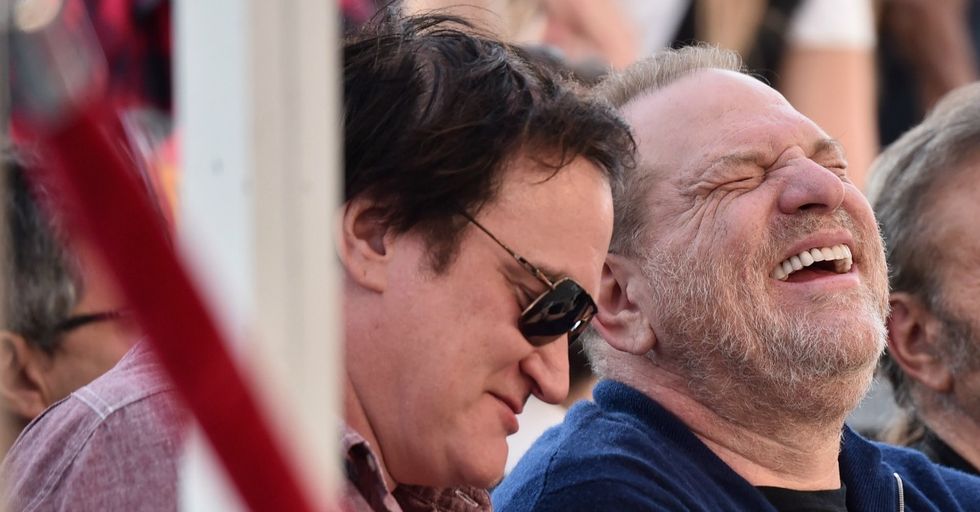 After the New York Times published an expose on Harvey Weinstein's history of sexually assaulting women, an outpouring of women came forward with similar reports. Gwenyth Paltrow, Angelina Jolie, Cara Delevigne, Lena Headey, and Rosanna Arquette are just some of the women who have shared stories about Weinstein's abusive actions.

When one survivor comes forward, it creates a safer space for more survivors to come forward. Why wouldn't women come forward immediately after being assaulted, you ask? There are a plethora of reasons, from not wanting to re-live the traumatic experience to the fear of being blacklisted professionally. But most importantly, because society is dumb AF and trusts the word of powerful men who commit sexual assault more than the women who accuse them of doing it. (And let's not forget male victims of sexual violence, whose experiences are also often invalidated, unfortunately.)

In a world that blames assault victims for their own trauma, it's not easy for survivors to come forward. And quite frankly, we should be putting more emphasis on the perpetrators of assault and bystanders who knew of it happening and did nothing.

One of those bystanders is Quentin Tarantino, and he's finally taking responsibility for his actions (or, more appropriately, his lack of action).

Powerful men in Hollywood who knew about Weinstein's assault history haven't been doing anything about it because they were worried about their careers.

The argument against calling someone out for sexual assault is often, "Oh no, don't bring it up, it could ruin his career!" That argument is now invalid because the literal President of the United States has been accused of multiple sexual assaults. This tongue-in-cheek tweet was posted just after Donald Trump was elected.

Quentin Tarantino worked with Harvey Weinstein closely on films like

Reservoir Dogs, Inglorious Bastards, Pulp Fiction, Kill Bill, and The Hateful Eight. Tarantino told the New York Times that he knew about several instances of sexual misconduct by Weinstein and regrets not doing anything about it. And it wasn't just rumors or hearsay. His girlfriend at the time, Mira Sorvino, told him a personal experience where Weinstein made advances at her and touched her inappropriately.

He heard about Weinstein sexually assaulting actresses long before the articles came out recently.

"There was more to it than just the normal rumors, the normal gossip. It wasn’t secondhand. I knew he did a couple of these things," Tarantino told the Times. "Everyone who was close to Harvey had heard of at least one of those incidents [from the first couple of articles that came out]" he said, “It was impossible they didn’t."

He added, "I wish I had taken responsibility for what I heard... If I had done the work I should have done then, I would have had to not work with him."

According to his interview with the New York Times, he heard story after story about Weinstein's sexual misconduct but failed to take action. He now regrets that. "What I did was marginalize the incidents... anything I say now will sound like a crappy excuse," he said.

He came clean about not taking the stories seriously enough and called out other men in Hollywood for contributing to an atmosphere where this kind of abuse can happen.

"I’m calling on the other guys who knew more to not be scared. Don’t just give out statements. Acknowledge that there was something rotten in Denmark. Vow to do better by our sisters," Tarantino said. It's disappointing that Tarantino didn't say anything at the time. Hopefully, his comments will encourage more people to actually hold their peers accountable for their actions. It's about time we didn't make the victims of sexual violence carry the entire burden.