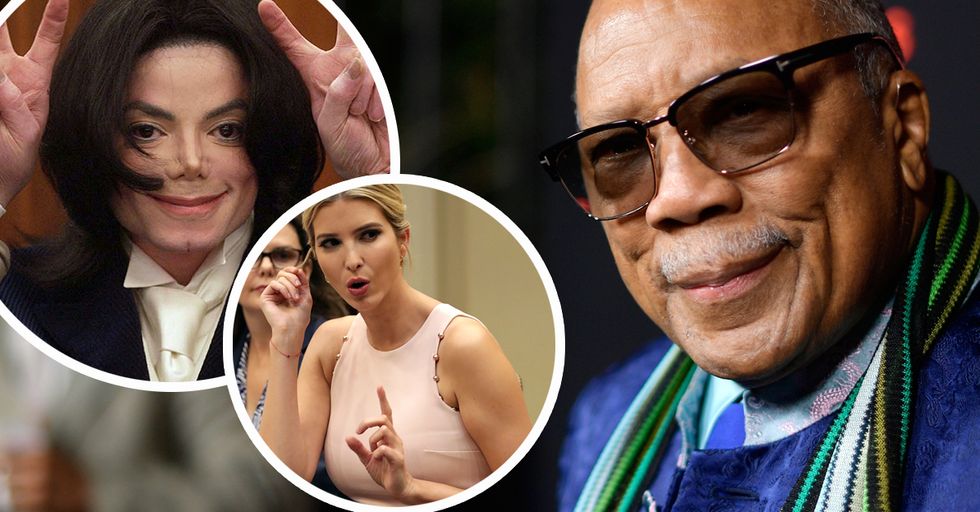 Quincy Jones is a legend of a music producer. The man is larger-than-life and has been the best in the business for decades. He's won 28 Grammys and produced all of Michael Jackson's biggest-selling albums.

Jones is now 84 years old, and he's not slowing down anytime soon. He recently sat down with Vulture's David Marchese and gave a truly insane, tell-all interview that's full of incredible revelations and taboo confessions about pretty much everything under the sun.

"All I've ever done is tell the truth," Jones told Marchese. "I've got nothing to be scared of, man."

Clearly, that is quite the case.

According to Jones, Michael Jackson stole a lot of his music.

Right off the bat, Marchese asked Jones, "What's something people don't understand about [Michael Jackson]?" Jones said, "I hate to get into this publicly, but Michael stole a lot of stuff. He stole a lot of songs ... The notes don't lie, man. He was as Machiavellian as they come ... Greedy, man. Greedy."

Marchese asked him, "What's something you wish you didn't know?" Jones answered, "Who killed Kennedy."
Marchese pressed, and Jones revealed who it was: "[Chicago mobster Sam] Giancana. The connection was there between Sinatra and the Mafia and Kennedy. Joe Kennedy — he was a bad man — he came to Frank to have him talk to Giancana about getting votes." When Marchese wanted to talk about this theory, Jones simply said, "We shouldn't talk about this publicly."

The Beatles were "the worst musicians in the world."

Jones let it slip that he met Paul McCartney when he was 21. Marchese asked him what his first impression of the Beatles was, and Jones said, "That they were the worst musicians in the world. They were no-playing motherf**kers. Paul was the worst bass player I ever heard. And Ringo? Don't even talk about it."
He then told a story about how he was in the studio with Ringo, and he couldn't get this part of a song right, so they told him to take a break and go get some food. While Ringo was out, they called in another drummer to fix the part. When Ringo came back and they played the part back to him he said, "That didn't sound so bad." Jones replied, "Yeah, motherf**ker because it ain't you." "Great guy, though," he added. Guys, we are not remotely done yet. Wait 'til he gets to the Trump family.

Paul Allen, the Microsoft guy, is the next Jimi Hendrix.

According to Quincy Jones, Paul Allen, best known as the co-founder of Microsoft with Bill Gates, sings and plays guitar just like Jimi Hendrix. Don't you see the resemblance?

"I used to hang out with him," Jones said of Trump. "He's a crazy motherf**ker. Limited mentally — a megalomaniac, narcissistic. I can't stand him." But it's the next sentence that really blew the roof off the place...

"I used to date Ivanka, you know."

That's right. Apparently, Quincy Jones has been on at least one date with Ivanka Trump. ...At least he saw it as a date.
The way he tells it, "Twelve years ago. Tommy Hilfiger, who was working with my daughter Kidada, said, 'Ivanka wants to have dinner with you.' I said, 'No problem. She's a fine motherf**ker.' She had the most beautiful legs I ever saw in my life. Wrong father, though." I'll say!
Now, it's very unclear whether this dinner even happened, and if so, whether it was actually date, and if it was actually a date, whether there was more than one date. While we eagerly await Ivanka's response to this claim, here are some other crazy stories Quincy Jones brought up in this interview...

"1964, when I was in Vegas," Jones said, "there were places I wasn't supposed to go because I was black, but Frank [Sinatra] fixed that for me. It takes individual efforts like that to change things."
About Bono, Jones said, "When I go to Dublin, Bono makes me stay at his castle because Ireland is so racist. Bono's my brother, man. He named his son after me."

But even though Quincy Jones and Bono may be brothers, he still thinks U2 is terrible.

When Marchese asked Jones if U2 is still making good music, this was Jones' response: "[Shakes head.]" When asked why not, he said, "I don't know. I love Bono with all my heart, but there's too much pressure on the band."

Cyndi Lauper hated "We Are the World."

Marchese asked Jones about a story in his memoir about how rock musicians who were asked to be on "We Are the World" complained about the song. Well, this is what Mr. Quincy Jones had to say about that:
"It wasn't the rockers. It was Cyndi Lauper. She had a manager come over to me and say, 'The rockers don't like the song.' I know how that s**t works. We went to see Springsteen, Hall & Oates, Billy Joel, and all those cats and they said, 'We love the song.' So I said [to Lauper], 'Okay, you can just get your s**t over with and leave.' And she was f**king up every take because her necklace or bracelet was rattling in the microphone. It was just her that had a problem." And now, Quincy Jones' thoughts on modern pop music...

When asked if there's any innovation in modern pop music, Jones responded, "Hell no. It's just loops, beats, rhymes, and hooks. What is there for me to learn from that? There ain't no f**king songs."
The problem, he explains, is with "the mentality of the people making the music. Producers now are ignoring all the musical principles of the previous generations. It's a joke. That's not the way it works: You're supposed to use everything from the past. If you know where you came from, it's easier to get where you're going."

That being said, there are still a bunch of pop artists he likes.

Who's doing good work today? According to Quincy Jones, "Bruno Mars. Chance the Rapper. Kendrick Lamar ... And the Ed Sheeran record is great. Sam Smith — he's so open about being gay. I love it. Mark Ronson is someone who knows how to produce."

The conversation shifted abruptly from how hopeless modern pop music is to how "[Marlon] Brando used to go cha-cha dancing with us. He could dance his ass off," Jones continued. "He was the most charming motherf**ker you ever met. He'd f**k anything. Anything! He'd f**k a mailbox. James Baldwin. Richard Pryor. Marvin Gaye." When Marchese asked how he knew Brando slept with all those people, Jones responded, "Come on, man. He did not give a f**k! You like Brazilian music?" And they were on to the next topic.

He used to hang out with Mussolini's son. Yes, that Mussolini.

Quincy Jones used to hang out with the son of the guy who's taking a car ride with Hitler in the above photo, one of the most notorious dictators in history. Jones said, "I knew Romano Mussolini, the jazz piano player, the son of Benito Mussolini. We used to jam all night." Quincy Jones has certainly had a memorable life, and we're all just glad he's gotten to old to give a s**t about what he says!