Quite Possibly the Most Insane Story of a Jilted Bride, Paintball, and Las Vegas | 22 Words 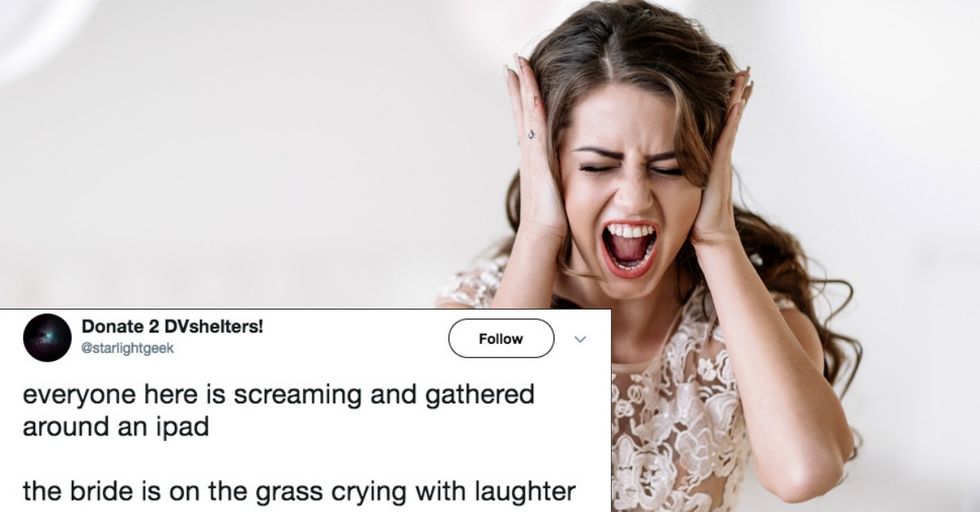 Quite Possibly the Most Insane Story of a Jilted Bride, Paintball, and Las Vegas

Everyone hopes that their wedding day is full of nothing but white doves, loving sentiments, time with family and friends, delicious cake, and of course, your loving spouse who you look forward to spending the rest of your life with.

There's a Twitter thread going around from a bridesmaid that's pretty much just insane. It recounts what happened after her friend (the bride) caught her fiancé cheating with another bridesmaid.

That sounds completely like the plot of a movie, but it happens. It doesn't, however, usually happen like this.

"Y'all. I have been having the most ridiculous 24 hours. Friend wants to keep the drama off twitter, but is okay with me saying this."
"She caught her fiance in bed with one of her bridesmaids last night. They were supposed to be getting married today."

Not wanting to waste a good party, the bride held the potluck anyway — groom and skanky bridesmaid excluded, of course.

"It was going to be a low-key backyard wedding. We're still doing the potluck & party. He's not welcome. Locks changed, etc."
"I took her to the ranch overnight (got to fix my computer this morning as a result!) & we're back in Austin. Swung by my house for supplies."

Of course the bride is still upset, but at least she had support — and people to plot revenge with.

"She's angry as hell. No tears yet. I was a bridesmaid and there was a third; 3rd and bride and I are plotting."
"Frankly, I wouldn't piss off two Slytherins and a Ravenclaw, especially if two of them have law degrees."

There was dancing and a round of shooting paintballs at the bride's wedding dress.

"Quick update: potluck was fun, his crap is cleared out, and now we are dancing to a good DJ and shooting paintballs at her dress. A+"

A new term was coined.

"update: Everyone is now calling them 'painballs' and I just can't."

Oh, it gets worse.

To be clear, the groom was apparently set on getting married because HE'S GETTING MARRIED TO THE SKANK.

"she managed to choke out "I didn't dodge a bullet; I dodged a fucking atomic bomb" oh my gods this is just what is happening"

Of course, the side chick/wife (?) has to bring up the honeymoon.

"Shitty Bridesmaid is boasting how they're going on a REAL honeymoon. We *were* taking bets on whether it would be a tacky resort in Mexico."
"or a cliche trip to Paris, but the Bride announced that he's not leaving the country; she's got his passport ???"

Bets were still being placed.

"We are now taking bets on whether she's going to livestream the wedding night."

The poor ex-bride-to-be was one step ahead of the dude though.

"Oh btw Ex and Bride had a shared bank account for their honeymoon (they were planning on Scotland in late autumn). She drained & closed it."
"while waiting for me to pick her up last night. She's changed the passwords on all her accounts (including her Netflix, ofc)."

Insanity. But at least she has good people around her, right?

"I'm so, so glad she decided to go ahead with the potluck. Imagine if she'd been here alone or with just a couple of us instead of 30+ people."

"We're all here, fiercely loving on her and supporting her. It's been a hell of a day."