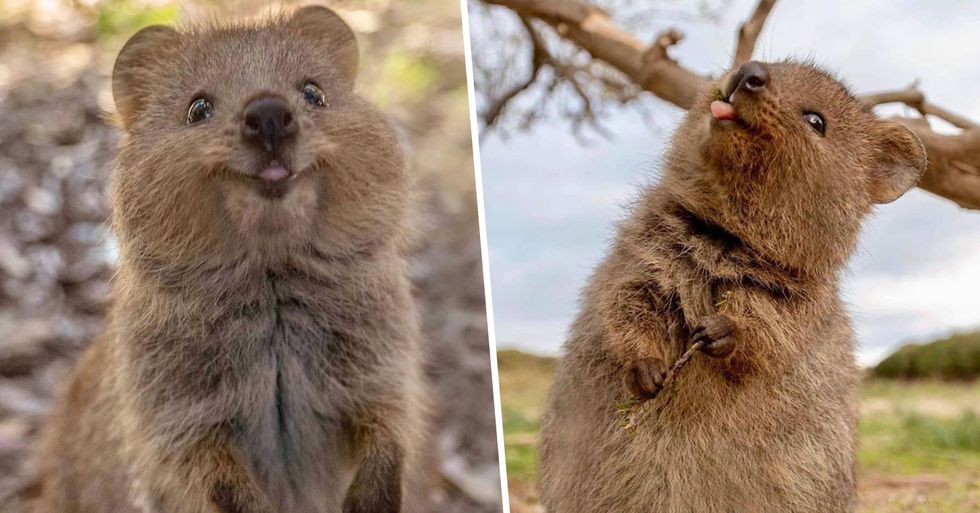 There's no shortage of cute animals on the internet. But alongside all the usual suspects (dogs, cats, and other pets tend to dominate in the field) there are also some slightly more offbeat choices. And one which is setting the internet alight this week? Quokkas, of course.

These cute little marsupials are pretty rare, and only live on one specific island off the Australian coast. But the real reason everyone's so obsessed with them? Well, they have an extremely infectious grin - and we can't get enough...

They're native to Rottnest Island, meaning they're pretty rare and unusual creatures.

They're from a group of mammals called marsupials.

They're related to the kangaroo, which kind of makes sense when you look at their feet.

And locals on the island say they're strangely sociable, too.

They've been known to wander in backyards.

And they scavenge food from trash cans, just like racoons.

Quokkas have almost no fear of humans, which makes for some seriously cute pictures.

But the real reason people can't get enough?

It has to be the incredible smiley faces these cuties have.

Whether or not they're actually smiling.

It sure looks like they are - which is good enough for us.

The fact you can get so close to them makes them even cuter.

No trip to Rottnest Island would be complete without meeting a quokka.

There's been a recent surge in conservation efforts.

Which is largely thanks to the fact they look so sweet!

So even though you can get close ...

It's important not to touch or feed quokkas, as this can cause them problems.

If you break these rules?

Well, you better be prepared to pay for it! The fine is a whopping $300.

They sure look sweet.

But they actually have surprisingly sharp claws, so it makes sense to stay away.

Even when they aren't smiling...

Quokkas have the sweetest little faces.

We want a quokka selfie!

These animals are just so ridiculously photogenic.

Why hadn't we heard of them before?

All we know is, we're glad we have now. In the mood for more cute animals? Keep scrolling for the dalmatian with an adorable heart on his nose.