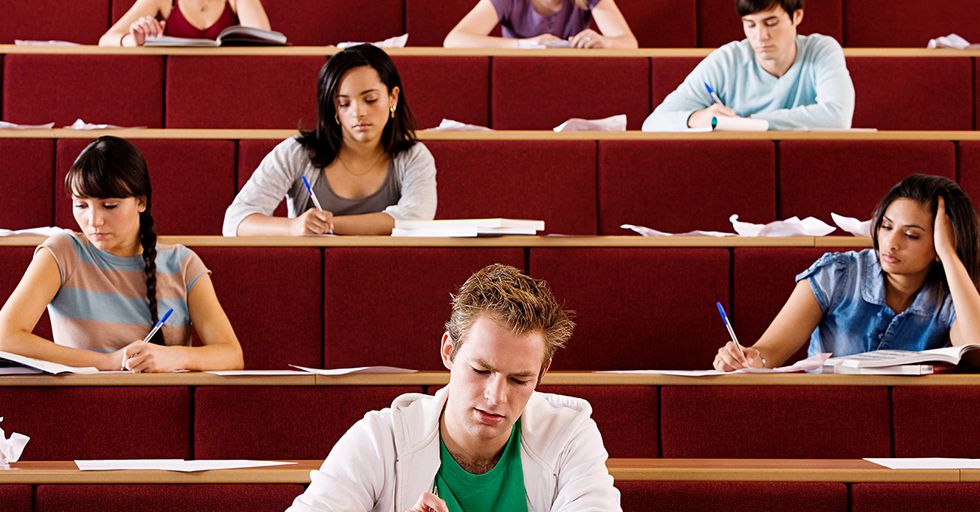 Conversations That Could Only Take Place on a College Campus

There's nothing like being in college. You live with people your own age in a miniature town filled with other people who are also your own age. For many, going off to college means being away from the home they grew up in for the first time. So yeah, there's a lot going on during the four-plus years people spend in the world of higher education.

College also happens to be a place where people say hilarious things. Some of the conversations I overheard while in college remain the most hilarious things I've ever heard in my life.

As it turns out, there's an entire Instagram account dedicated to sharing the funny things that people overhear on college campuses. It's called @overhearduniversity. People from all different school send in their submissions and the account posts the best ones. Whether you're in college or not, I highly recommend giving them a follow. Here are some funny posts they've shared recently.

Whoa, whoa, whoa! I thought you were going to say "shave my head" or something. Going private on Instagram is going too far.

Oh, right. Papers can also be edited. Still, it was nice of them to offer their photo editing services!

Time for a mental breakdown.

This is pretty much how I felt throughout my entire collegiate career. Luckily, I graduated with an English degree, meaning I had plenty of time for a mental breakdown.

Hey, you can have a lazy Sunday on any day of the week! Kind of. OK, not really.

Preach, lady. I find myself doing the same thing pretty frequently these days.

Don't expect the professors to handle you with kid gloves. They're not there for you. They're there for tenure.

Once they do achieve tenure, many professors stop caring about pretty much anything. I don't blame them! I wish my job offered tenure!

The day before my own graduation, my school called me asking for a donation. There I was, tens of thousands of dollars in debt, being asked to give more money to the school. It was really something.

Hey, this is a pretty healthy attitude! I mean, you could try studying, getting a tutor, and going to office hours, but crying is good too.

The bad news is you probably won't love your new major. The good news is that you can talk about how much you hate it at length.

There's a word for that.

I feel like we're only a few years away from the email field being replaced with "tag." No one's making carbon copies anymore, after all.

If you think about it, humans are responsible for pretty much of all of humanity's problems. I know. Pretty deep, right?

If you're going to try to date while in college, you're gonna be stressed about multiple things. That's the way it goes.

Uh-huh. It must be another tenured professor.

Let me let you in on a little secret: That feeling does not go away after graduation.

As long as you're keeping up with the work, I think everyone should skip class at least once. But probably not on the first day.

Whoever said this clearly hasn't discovered the parking hacks to avoid paying for a pass and avoid getting a ticket. I guess that's more of a senior year thing.

I guess avocado pits are roughly the same size as ping pong balls. But the similarities end there.

Do you even lift?

I'd like to meet this woman and be her best friend. We already have so much in common!

It's only been an hour.

But you could be right! Some professors hate everyone.

Wouldn't this be great, though? You could minor in everything!

The brain is very cool. Not sure that's enough of a reason to change your career path, but you do you!

Hoarding, saving — whatever you wanna call it, you should probably be doing it. Those student loans aren't gonna pay themselves.

Guys. Guys. There's a name for that. College really has done a number on you, huh?

My mind is blown.

College is a time for many mind-blowing realizations, just like this one.

College is also a time for being very drunk. (Please do so responsibly, though!)

There is no vow more sacred than one made on a phone. I'm pretty sure that's in the Bible.

Me as a professor:

It's nice to know that sometimes, the people you slacked off with in college grow up to become professors. Something seems right about that.

Five pages is a lot, honestly.

First of all, change the font size to 14 on all the periods. That should get you an extra half page at least.

It's probably best not to think too far ahead. It's mostly going to be paying loans back, anyway. Share this with someone currently in college!