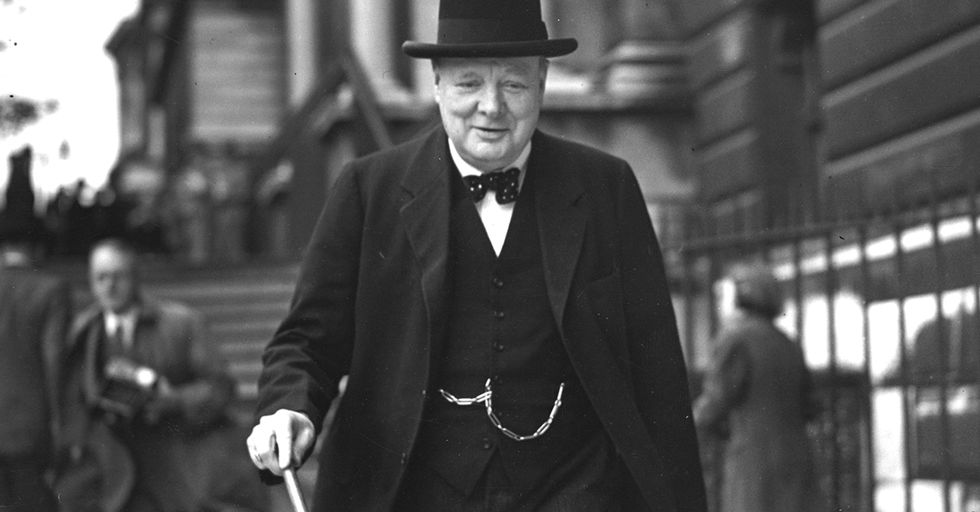 Badass Quotes From Historical Figures That Are Still Insanely Relevant

Sometimes, a few words in exactly the right order can stick with us for generations. So when it comes to utterly badass historical quotes, there are quite a few to choose from!

We've compiled some of the most compelling quotes ever. Some are the words of people you've definitely heard of, like Albert Einstein and Julius Caesar, while others are a little more obscure. Yet even those mostly unheard-of quotes are completely awesome; you'll be wondering why you never heard them before!

Many of these quotes will have you in stitches, and others might have you in tears, but all of them are worth the read. Check out these badass historical quotes, many of which are still totally relevant today — and all of them are pretty thrilling to read about!

"They've got us surrounded again, the poor bastards." Creighton Abrams at the Chosin Reservoir. -spectre73

It's the Inigo Montoya story!

"A fool is the man who kills the father and leaves the child so that he may take revenge." -Aristotle Or maybe just...don't kill people? But sure, Aristotle. Go off, I guess.

Here's a comforting thought from Nietzsche:

-Nietzsche Remember that the next time you have a bad day--you can always figure out that 'how'!

During WWII. General Eisenhower told General Patton to bypass the German city of Trier because it would take at least four army divisions to capture it.

Patton wrote back, "Have taken Trier with two divisions. What do you want me to do? Give it back?"

This guy really is the Catholic patron saint of comedy.

literally getting roasted alive for his beliefs-

Saint Lawrence: "I'm well done on this side. Turn me over!"

Just got shot in the chest:

“Friends, I shall ask you to be as quiet as possible. I don’t know whether you understand I’ve just been shot. It takes more than that to kill a Bull Moose." —Teddy Roosevelt

"You must not fear death, my lads; defy him, and you drive him into the enemy's ranks."

Okay, this is a really cool quote, but we should probably also note that shortly after good ol' Napoleon said this, the majority of his army died from infection and freezing. Yikes.

Go out with dignity...and flawless grammar.

“I see that you have made three spelling mistakes."

These were the final words of Marquis de Favras upon reading his death warrant before being hanged for high treason.

That’s my kind of dude, y’all.

"I do not fear death for I had been dead for billions and billions of years before I was born and had not suffered the slightest inconvenience from it." -Mark Twain, who raises...a pretty good point, actually.

"There are approximately 1010300 words in the English language, but I could never string enough words together to properly explain how much I want to hit you with a chair." -Alexander Hamilton, to Thomas Jefferson I'm so sad this actual Alexander Hamilton quote didn't make it into the musical!

His father had previously abdicated, thereby making Mehmed II the new Sultan. In the period leading up to the Battle of Varna (1444), Mehmed II was still new to the throne, young, and inexperienced, and needed someone to lead his army. He approached his retired father pleading for him to lead the Ottoman army against the Christian crusaders, but he refused because he had already abdicated the title of Sultan and thus felt he had no more obligation to lead the armies. This quote is what Mehmed II needed to say to his father to convince him to lead the armies one last time.

One of the many stories of courage from the WW2 era:

“Through if be to die, we will fight... We will fight not for ourselves but for future generations. Although we will not survive to see it, our murderers will pay for their crimes after we are gone. And our deeds will live forever."

-Izhak Katznelson, one of the leaders of the Warsaw Ghetto uprising

These people fought with their backs against the wall, simply so that they could die with dignity.

And here's some verbal awesomeness from WW1:

"Retreat? Hell, we just got here!"

-Major Lloyd Williams before the US Marines entered Belleau Wood after routing the Germans into the woodland in 1918.

Ever heard of the badass John Paul Jones?

“I have not yet begun to fight!"

The Soviets kept sending assassins to kill Yugoslavia’s leader, Josip Broz Tito, and they kept failing. Tito sent Stalin a telegram saying something along the lines of “Stop sending assassins. We have caught five of them already. If you don’t stop sending assassins, I will send one to kill you and I will not have to send another." -kind-of-there

The Salem Witch trials come with plenty of stories.

The story of this is, Giles Cory, a farmer, was accused of being a witch and practicing witchcraft. When he was being charged he needed to say how he pleaded. The law at the time stated that you could not try someone if they don't plead. The way the officials would get people to plea was by placing boards on top of them and loading them with more weight. But even after that, he refused to plea and just kept saying "More weight." After a couple of days, he ended up dying. -TheAbominableBanana

Maybe the silver medal of the witch trials for me is Sarah Good's "I'm no more a witch than you are a wizard, and if you take away my life God will give you blood to drink," before she was hanged.

Apparently the story goes that the man she said this to choked on his own blood. Even if that's not exactly true the phrase "God will give you blood to drink" is just so metal to me.

"A man who views the world the same at fifty as he did at twenty has wasted thirty years of his life."

Napoleon knew how to diss his opponents.

When a Russian officer was talking to Napoleon Bonaparte, he said: "We Russians fight for honor, you French fight only for gain!" To which Napoleon replied saying "You are quite right, each fights for that which he does not possess." -samurai_64

When you're utterly surrounded, what do you say?

The one-word reply by the commander of surrounded American forces at Bastogne to the German demand for surrender.

Winston Churchill could deal out roasts with the best of them.

Lady Nancy Astor (to Winston Churchill): "If you were my husband, I would poison your tea!"

Churchill: "Nancy, if I were your husband, I would drink it!"

Philip sent a message to the Spartans saying: If I invade Lakonia you will be destroyed, never to rise again.

The Spartans replied with one word, If.

Seriously, what even WERE Spartans?!

Another great Spartan quote: when the Persian archers' arrows were so many they blocked the sun, King Leonidas said, "Then we'll fight in the shade." -3rdmonkeyfighter

The WW2 version of saying, 'what goes around, comes around.'

"The Nazis entered this war under the rather childish delusion that they were going to bomb everyone else, and nobody was going to bomb them. At Rotterdam, London, Warsaw, and half a hundred other places, they put their rather naive theory into operation. They sowed the wind, and now they are going to reap the whirlwind." -Arthur "Bomber" Harris

There's a reason your signature is called a "John Hancock."

"There, King George will be able to read that."

Could you explain the concept of relativity right now?

-Albert Einstein, a genius with a sense of humor.

Some of the bravest people during 911 were the airplane passengers themselves.

Todd Beamer, on United Airlines flight 93, before he and other passengers stormed the cockpit to divert the plane after the hijacking. I can't imagine how terrified they were at that moment and his bravery in those words makes my hair stand on end.

When in need of fresh insults, consult Macbeth.

Another hero in the time of the Holocaust:

“I would stand with God against man, rather than with man against God."

The Portuguese diplomat that saved 30,000 Jewish people during the Holocaust. He made Schindler’s numbers look like rookie numbers.

No one can make you feel inferior without your consent. -Eleanor Roosevelt Honestly, whenever you're in need of some motivation, go and read something that Eleanor Roosevelt said. She's amazing.

When the German Kaiser asked in 1912 what the quarter of a million Swiss militiamen would do if invaded by a half million German soldiers, a Swiss ambassador replied, "Shoot twice and go home." -Daniel_A_Johnson

And quotes like this explain how one guy's legacy can stay alive for a good two thousand years!

"I only regret that I have one life to lose for my country." Nathan Hale right before he was hanged by the British during the American Revolution. -eternalrefuge86

"If you can't explain it simply, then you don't understand it well enough." -Albert Einstein, dishing out the truth. Everyone should keep this in mind. The proof of its validity? Einstein's simple yet effective explanation of relativity, seen above. What are your favorite badass quotes from history? Share them in the comments!