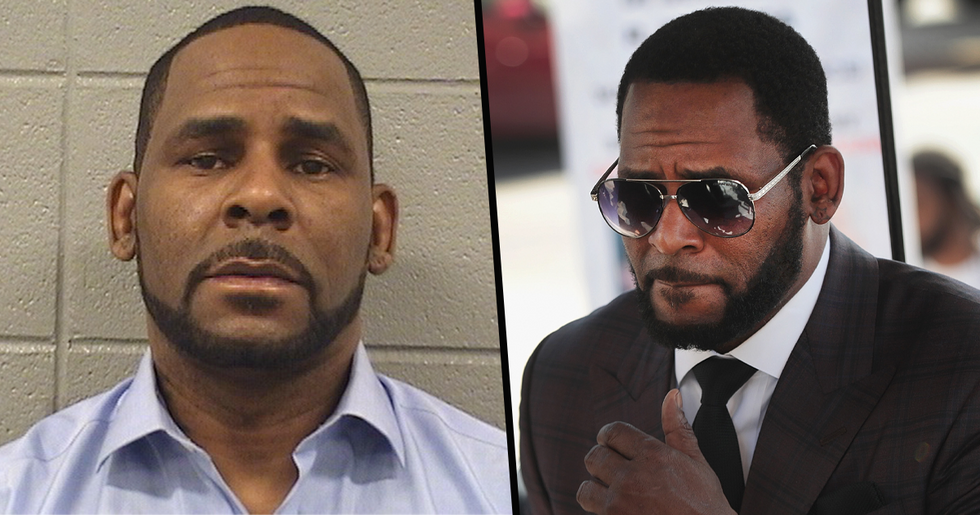 It isn't looking good for the disgraced singer.

R. Kelly, who has been accused of sexual misconduct for over 2 decades, has reportedly been having a rough time behind bars.

Reports are coming in that suggest R. Kelly has been targeted by other inmates...

And, in more extreme instances, even attacked. Here's what we know...

A twenty-seven-year-old R. Kelly and a then fifteen-year-old Aaliyah Haughton were married in an illegal ceremony in Cook County, Illinois.

The couple met when Aaliyah was only twelve years old and Kelly was twenty-four.

And, later, it was revealed that R. Kelly’s tour manager, Demetrius Smith, obtained false documents that claimed that Aaliyah was eighteen so the pair could wed. The marriage was then annulled in February 1995.

For the rest of their careers, neither Kelly or Aaliyah spoke of their marriage.

When Aaliyah sadly died in a plane crash, he described her as his "best, best, best, best friend," but said that he "will never" speak of their marriage out of respect for his ex-wife and her parents who asked him specifically not to.

And then, a year later, Kelly found himself in another messy situation.

In 1996, Tiffany Hawkins decided, after their three-year relationship, that she was going to sue him for "personal injuries and emotional distress" during that entire period. She was fifteen at the time they met, while Kelly was twenty-four. Their relationship ended when she hit eighteen.

And everything was brushed under the carpet until 2001 when Kelly was slapped with yet another lawsuit which claimed that he forced Tracy Sampson, his intern, "into an indecent sexual relationship" when she was seventeen.

In a legal case, she revealed some disturbing details...

The former intern for Epic Records said that she felt like "an object" and "was cast aside" except for when Kelly summoned her for sexual relations. "He often tried to control every aspect of my life including who I would see and where I would go." This case was settled with another undisclosed payment.

And Kelly didn't stop there, because, a year later, things got dramatically worse...

The singer found himself swimming in the deep end with two more lawsuits filed against him for inappropriate sexual activity including the videotaping and selling of a tape that he made of a woman without her consent.

And, in that same year, he was also charged for child pornography.

This was important because it would have swayed the jury who found him "not guilty."

The document stated that no one could prove that the girl in the tape was a minor even though she was born in 1984 and the videos dated back to the nineties. A classic case of a biased jury.

But, when a detailed report of his "sex cult" emerged, the world started piecing things together.

Though it had been happening for years beforehand, it was all covered up until BuzzFeed revealed that Kelly was a culprit when it came to the sudden disappearance of daughters. Apparently, he had said that he would help them with their music careers and then took full control of their lives, "dictating what they eat, how they dress, when they bathe, when they sleep, and how they engage in sexual encounters."

The disgraced singer was charged with 2 felony counts of prostitution and solicitation involving a girl under eighteen.

Appearing in court in New York at the start of August, the star pleaded not guilty...

But was denied bail on the grounds that he poses a flight risk. Days later, prosecutors in Minnesota filed prostitution charges against the star, meaning he faces criminal cases in 3 states.

In the meantime, his lawyer has been pleading with the system to let him go...

Because prison hasn't quite been his cup of tea.

Steve Greenberg, his lawyer, said that he hasn't been receiving enough medical treatment in jail.

According to reports, Kelly's health has been declining since he was arrested and forced into an orange jumpsuit.

He also said "confinement is stifling..."

Evidently, he is comfortable for our judicial system to let a convicted child molester back onto our streets so that he can capture and abuse other young minors. Wow, sounds ideal, doesn't it?

And you wouldn't believe what else was mentioned...

He also claimed that Kelly is having a hard time because he's only allowed to see one of his "lady friends" at a time.

Steve Greenberg said this: "Although he lives and has lived with 2 lady friends, only one of them is allowed to be on his visiting list, and after ninety days he's required to switch."

And, just to make his time behind bars even more turbulent...

Reports have been suggesting that the other inmates haven't been taking too kindly to his presence.

Kelly was sitting on his bed when another inmate walked in his cell...

And launched a full-fledged attack, punching and kicking him.

Sources say the inmate went on the attack because he was angry about the detention facility being placed on another lockdown...

Which was a result of the numerous Kelly protesters outside the jail.

It was reported that Kelly was checked over by the prison doctor following the attack...

Where it was determined that he had no broken bones or serious injuries.