R. Kelly Says His Health Is Declining in Jail and Wants to Be Released | 22 Words 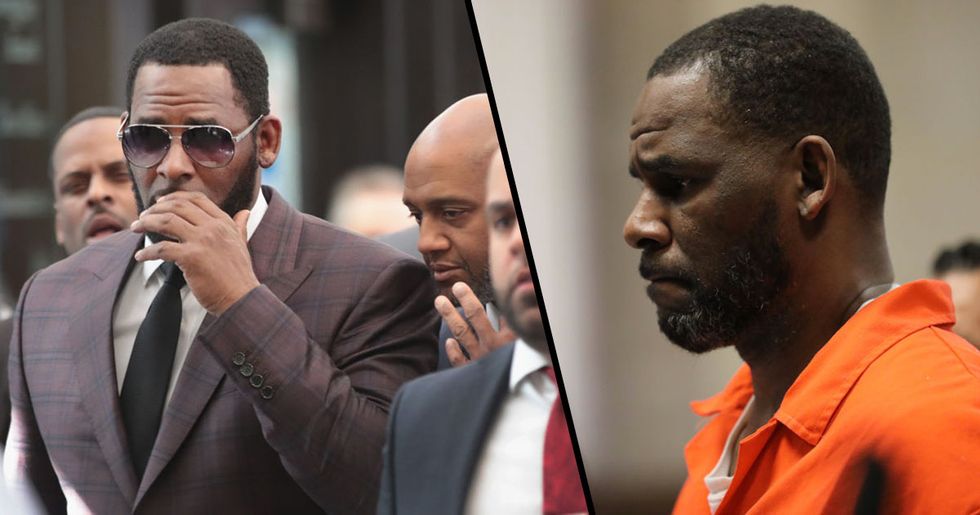 R. Kelly Says His Health Is Declining in Jail and Wants to Be Released

After years of investigation, R. Kelly (legal name, Robert Sylvester Kelly) has been formally charged with 10 counts of aggravated criminal sexual abuse in Cook County, Illinois, according to court records.

After initially being arrested in February and then released on bail, the singer found himself in handcuffs again in July when he was arrested on two counts of sex-related charges. Things are not looking good for Kelly at the moment and now his lawyer is pleading with the system to release the abuser due to his "declining health."

Sorry, but I'm sure that's not how prison works.

Keep scrolling to find out the shocking details of this story.

R. Kelly has been accused of sexual misconduct for over two decades.

The timeline of his accusations stretches all the way back into the nineties, when he married Aaliyah.

A twenty-seven-year-old R. Kelly and a then fifteen-year-old Aaliyah were married in an illegal ceremony in Cook County, Illinois.

The couple met when Aaliyah was only twelve years old and Kelly was twenty-four.

And, later, it was revealed that R. Kelly’s tour manager, Demetrius Smith, obtained false documents that claimed that Aaliyah was eighteen so the pair could wed. The marriage was then annulled in February 1995.

For the rest of their careers, neither Kelly or Aaliyah spoke of their marriage.

When Aaliyah sadly died in a plane crash, he described her as his "best, best, best, best friend," but said that he "will never" speak of their marriage out of respect for his ex-wife and her parents who asked him specifically not to.

And then, a year later, Kelly found himself in another messy situation.

In 1996, Tiffany Hawkins decided, after their three-year relationship, that she was going to sue him for "personal injuries and emotional distress" during that entire period. She was fifteen at the time they met, while Kelly was twenty-four. Their relationship ended when she hit eighteen.

After settling on a 250,000 dollar deal, she dropped the charges.

And everything was brushed under the carpet until 2001, when Kelly was slapped with yet another lawsuit which claimed that he forced Tracy Sampson, his intern, "into an indecent sexual relationship" when she was seventeen.

In a legal case, she revealed some disturbing details...

The former intern for Epic Records said that she felt like "an object" and "was cast aside" except for when Kelly summoned her for sexual relations. "He often tried to control every aspect of my life including who I would see and where I would go." This case was settled with another undisclosed payment.

And Kelly didn't stop there, because, a year later, things got dramatically worse...

The pedophile, (yes, as uncomfortable as it may make you, that's exactly what he is), found himself swimming in the deep end with two more lawsuits filed against him for inappropriate sexual activity including the videotaping and selling of a tape that he made of a woman without her consent.

And, in that same year, he was also charged for child pornography.

This was important because it would have swayed the jury who found him "not guilty."

The document stated that no one could prove that the girl in the tape was a minor even though she was born in 1984 and the videos dated back to the nineties. A classic case of a biased jury.

These accusations continued to haunt him throughout his entire career.

And when the victims of his abuse decided to come forward in 2017, Kelly's world came crashing down. I mean, the fact that he wasn't arrested and sent to rot in prison earlier is beyond me. All of the facts point to him being a child molester, yet his most "loyal fans" sit there and defend him like he's even worth a second glance. It's disgusting.

When BuzzFeed exposed a detailed report of his "sex cult," the world started piecing things together.

Though it had been happening for years beforehand, it was all covered up until BuzzFeed revealed that Kelly was a culprit when it came to the sudden disappearance of daughters. Apparently, he had said that he would help them with their music careers and then took full control of their lives, "dictating what they eat, how they dress, when they bathe, when they sleep, and how they engage in sexual encounters."

And, despite all of this evidence, he was only arrested properly in July 2018.

The abuser is awaiting trial, which is set for April 2020, but in the meantime, his lawyer is pleading with the system to let him go because prison isn't his cup of tea.

Sorry, but beggars really can't be choosers. According to reports, Kelly's health has been declining since he was arrested and forced into an orange jumpsuit.

He also said "confinement is stifling..."

That's the point, Steve. So let me get this straight... you want our judicial system to let a guilty, child molester back onto our streets so that he can capture and abuse other young minors? Wow, sounds ideal, doesn't it?

And you wouldn't believe what else he mentioned...

He also claimed that Kelly is having a hard time because he's only allowed to see one of his "lady friends" at a time. What in the name of sweet baby Jesus?!

Steve Greenberg said this: "Although he lives and has lived with two lady friends, only one of them is allowed to be on his visiting list, and after 90 days he's required to switch." Sorry Jocelyn, it's Azriel's turn for these next three months. How he still has girlfriends is also beyond me. Both of them are twenty-one but met Kelly three years prior. Of course, they did.

A leopard never changes its spots.

That's all I can say about this one.

Earlier this month, Kelly failed to show for a hearing in Minnesota.

He is facing two charges for soliciting prostitution as well as agreeing to hire someone for sexual contact in the state.

Even though his lawyer is doing all he can to help the abuser...

It doesn't look like he's going to win this one. We sincerely hope that R. Kelly pays for what he did to those underage girls.