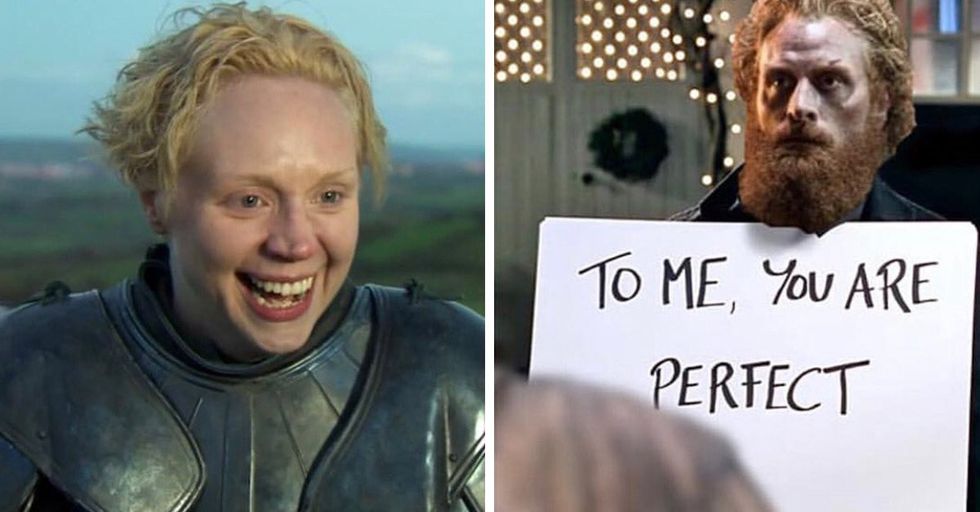 These 'GOT' Memes Will Make Your Heart Skip a Beat

OK, let's get this out of the way first: There will be spoilers! If you haven't watched up to Season 8, Episode 2 of Game of Thrones, go and do that before reading ahead. But come on. You knew there'd be spoilers. This is about Game of Thrones, after all, and after Sunday night's episode, we couldn't avoid going into spoiler territory.

Now, I know we're only two episodes into the season so far, but holy mother of dragons so much has already happened. I could spend a good few hours discussing the bizarre mistake in the first episode of the season or trying to forget that scene between Arya and Gendry in episode two, but, uh, I don't want to do that.

The love may be just a touch one-sided, but the memes are sure to delight us all.

His face. That, my friends, is the face of a man who has decided to spend the rest of his life trying to woo that very tall, very strong woman.

Only Tormund would think that sharing a story about drinking giant's milk and then pouring milk all over himself was the way to a woman's heart. Bless him.

He knows what he wants, and he's not going to let anything distract him. Including a gigantic army of the dead and an ice dragon.

Get yourself someone like Tormund who will support you no matter what. And if you can't find a Tormund, it's fine to settle for a Chip Gaines.

Tormund is a feminist. Don't @ me.

Tormund may be bold, but he is not crass like Bronn. He's a true gentleman. Kind of. I mean, there was that whole "pouring milk all over himself" thing that I just mentioned.

Jaime when he finds Brienne in bed with Tormund the next morning. #GameofThrones https://t.co/k0bAmhGDv4
— Radar Targaryen (@Radar Targaryen)1555983060.0

Get it? Because Jaime is missing a hand? You get it.

Talking about suckling from a giant and then pouring milk all over yourself is a BOLD flirting technique. Don’t try… https://t.co/1My10jk1YC
— Radar Targaryen (@Radar Targaryen)1555979093.0

Episode two was all about bold moves. Arya and Gendry (sorry; I know, I don't want to think about it either). Lyanna Mormont insisting on fighting. Tormund and the milk.

I'm pretty sure you could put The Wall between Tormund and Brienne, and he'd still find a way to get to her. Even if he had to commission his own ice dragon to do it.

Sure, everyone is probably going to die, but that doesn't mean there's no time for love. (P.S. Please don't let Brienne die, please please please I love her so much. That's me speaking. Not Tormund. Although I'm sure he feels the same way.)

Like, I get it. Love is grand and all that, but... Shouldn't you be preparing for battle or something?

Literally everyone else: We should definitely prepare for this big battle that will probably kill most of us. Tormund: I love Brienne. And milk.

Let me tell you a story.

He even pulled up a chair in the episode. Guys. This one is perfect.

Every time Brienne talks to Jaime, you can rest assured that Tormund is no more than 15 feet away. Even if he's not in the frame. He's there.

Everything you do is perfect.

To be fair, Brienne doesn't seem that into Tormund at this point, so I don't know that this technically counts as a love triangle... But I'm not complaining. I need more of this triangle. And in conclusion, I do not want Brienne to die. Thank you for coming to my TED talk.

Yes, Tormund is protective of Brienne and is not a fan of Jaime. But we know he would never be quite this aggressive.

No one has ever been prouder of anyone than Tormund was of Brienne after she was knighted. He's just the best.

Other people wanted food, shelter, or weapons. Not Tormund, though.

#GameofThrones Tormund: "We are all going to die, but at least we die together." *stares longingly at Brienne*… https://t.co/Js6brg4bAy
— Erick Fernandez (@Erick Fernandez)1555896793.0

Real talk, though: Why does this child look so much like Brienne? Is it freaking anyone else out a little bit?

And why does this animated hippopotamus look so much like Tormund?!

This is pretty close:

I bet they're both pretty smelly, to be honest. It's not like anyone has time for a hot bath when the army of the dead is approaching.

I have a new OTP.

Now we just need to establish a couple name for them. Torenne? Brimund? Hm.

Tormund is the best hype man in the seven kingdoms. If I had him cheering me on, I would feel absolutely invincible.

You say that now, Brienne, but just wait until after this big battle. (When you will certainly still be alive, I hope with all of my heart.)

Tormund is wooing Brienne with all of the adorable tenacity of a tiny, tap dancing Tahj Mowry. And that's saying something.

I didn't realize I needed a full-length version of Love, Actually featuring all of the characters in Game of Thrones, but I do. I need that.

everyone sitting around watching tormund tell that weird ass story to impress brienne #gameofthrones https://t.co/nmgaxOabY9
— i (@i)1555897226.0

Interesting. This is also the exact same face I made while watching the episode.

She'll come around. She has to. (And, just one more time — please let her live through this battle so that she can come around. Please. Thank you. Amen.)

Yep. That pretty much sums it up. Love Brienne and Tormund? Keep reading for more unbelievable facts about the rest of the cast.