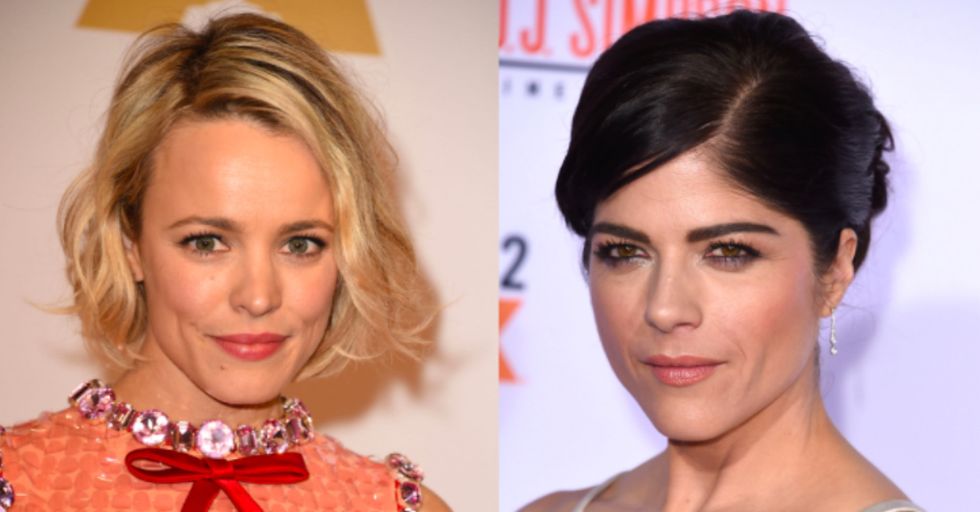 When the allegations of sexual assault and harassment against film director James Toback were first revealed, the report published by the Los Angeles Times detailed experiences from 38 women who'd come forward. Since that article was published, because of the bravery of the first 38 women, the number of accusers has climbed to 310.

On October 26, Vanity Fair published an exclusive story in which actresses Rachel McAdams and Selma Blair each describe how they were harassed and mistreated by Toback early in their careers. Their horrific stories are written in their own words and difficult to read, but it's so important to continue the conversation and to keep speaking out.

Blair worked with Los Angeles Times reporter Glenn Whipp on his first report about Toback, which was published less than a week ago on October 22.

Whipp's report opened the floodgates, and since, hundreds of women, including Rachel McAdams, have come forward with their own stories of abuse and harassment at the hands of this man. Both Blair and McAdams spoke at length about their experiences with Toback with Vanity Fair in an extremely moving and disturbing report. Both were harassed by Toback early in their careers when they were young actresses in their early 20s.

Selma Blair's representatives had arranged a meeting between her and Toback. He was described to her as a "really interesting and odd guy" who could help her career. Toback would only meet in his hotel room, but Blair insisted they meet in the hotel restaurant. When she arrived at the restaurant, she was told he wouldn't come down. "Against my better judgment," she said, "I went upstairs."

The incident Blair then describes is terrifying. After coercing her to take her top off to read part of a script, he "started to rub his penis through his pants and asked, 'Would you f*** me?'" When Blair said no, Toback started naming other actresses that he "did some really dark sexual things with." When she tried to leave, he blocked the door and said, "You have to do this for me. You cannot leave until I have release." Toback proceeded to press himself against her leg and force her to look at him. After he finished, he threatened her with murder if she ever spoke about what happened. "I didn't want to speak up," Blair said, "because, it sounds crazy, but, even until now, I have been scared for my life."

"I did not want to talk about this ever again," McAdams told Vanity Fair. "However, even though it is a really bad memory, I feel like some good could come from talking about it now."

McAdams was a 21-year-old theater student in Toronto when she met James Toback. After she auditioned for him, he told her he thought she was good for the role and invited her to his hotel room to talk about it. McAdams tried to get out of it, but he told her this was her only shot. Almost immediately after she got to his hotel room, the conversation turned sexual. "You know, I just have to tell you," Toback said to her, "I have masturbated countless times today thinking about you since we met at your audition." He started to question her commitment to being an actress, asking her how far she was "willing to go." Then, after making her read passages from reviews of his films out loud, he went to the bathroom. When he came back, he said, "I just jerked off in the bathroom thinking about you. Will you show me your pubic hair?" McAdams refused and eventually left. "This has been such a source of shame for me," she said. "I kept thinking, 'This is going to become normal any minute now. This is all going to make sense. This is all above board somehow.' Eventually I just realized that it wasn't." When McAdams called her agent the next morning and told her what happened, her agent said, "I can't believe he did it again ... He did this to one of my other actresses." McAdams was furious that someone she trusted wouldn't even warn her that she was about to go to the hotel room of a known sexual predator.

As Jessica Chastain wrote in her response to this report, this horrible behavior perpetrated by men and perpetuated by the industry must stop now.

For years, many in power tried to divide & conquer women in order to dominate, control, & victimize them. The inexc… https://t.co/lwr0lDWKcR
— Jessica Chastain (@Jessica Chastain)1509043273.0

"This has all got to stop," McAdams told Vanity Fair. "We need to start acknowledging what an epidemic this is, and what a deep-seated problem this is ... I think we almost have to exhaust ourselves sharing our experiences before the rebuilding can begin. And hopefully we never slip back into this darkness again."