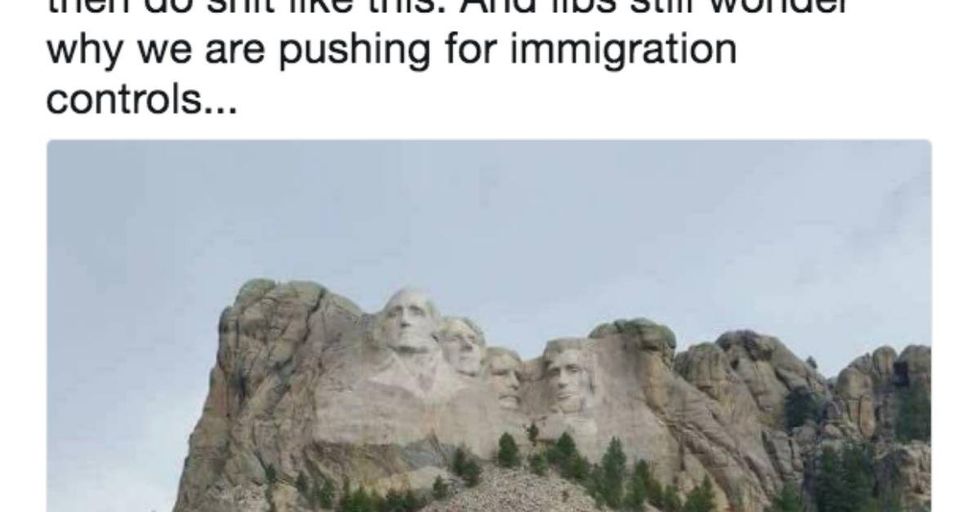 We shouldn't be surprised that a man with the name Lucian B. Wintrich, a political correspondent for a conservative political blog with an "About" page featuring a watermarked Getty image of a man wearing crooked transitional lenses, tweeted something extremely racist and bigoted.

Wintrich, an actual White House correspondent, really let one rip on July 29. He was handily schooled by Twitter, and not only didn't apologize but actually doubled down on his crazy.

This is Lucian Wintrich.

He is a conservative White House correspondent, and he says some really dumb things.

We probably shouldn't be surprised though.

Wintrich's Twitter is full of extremely tasteless and hateful comments.

But he really took his ignorance to another level with this next tweet.

Wintrich tweeted, "They break into our country, steal resources, then do s**t like this. And libs still wonder why we are pushing for immigration controls..."

Wildly inaccurate, tone-deaf, and racist to begin with, he managed to make it worse by pairing those hateful words with a photo of three Native American people flipping off a giant rock*. *Sure, the giant rock is Mount Rushmore, but it's still a rock.

He also mentioned that the "comments are fun." Come on, boys and girls! Let's take a look.

To break this down: First, the people depicted in this photo are Native Americans, not immigrants from another country. Second, European white folks were actually the ones who "broke into" this country, stole land from the Native Americans, used up resources, caused a mass genocide, and displaced countless groups of people. These are among the reasons these people aren't exactly fawning over that massive presidential rock carving.

Pretty justified if you ask me.

And — what! — this correction came from a conservative Trump supporter?! Lucian, honey, you know you're wrong when someone on Trump's side actually admits you were wrong.

Much like they hammered George Washington's nose down to a perfect nub and Abe Lincoln's chin to a distinguished slant.

It's pretty clear that Wintrich's own prejudices blinded him from the facts.

Either that, or he was aware of the anger he'd incite and chose to post it anyway. Not sure which is worse.

This poignant response turns Wintrich's own words back on him.

If a Native American person said what Wintrich did but referred to European whites, then it would be accurate. What was Wintrich's response?

This is beyond words.

It has accrued over 4,700 responses, many like this one, which spells out his bigotry and racism loud and clear.

It's gotten to the point where Twitter users are commenting on the fact that the tweet is still up.

It's insane. You'd think an ultra-conservative blogger who's somehow still a Trump supporter would see the error in his ways, publicly correct himself, and apologize to everyone. After all, that's the class with which Trump conducts himself. Not.

This about says it all.

But the problem is, he doesn't feel bad. He never will.

How do you get someone to admit they were wrong when they won't accept facts? How do you explain to a person what common human decency is?

All these questions and more, coming at you constantly for the next four years.