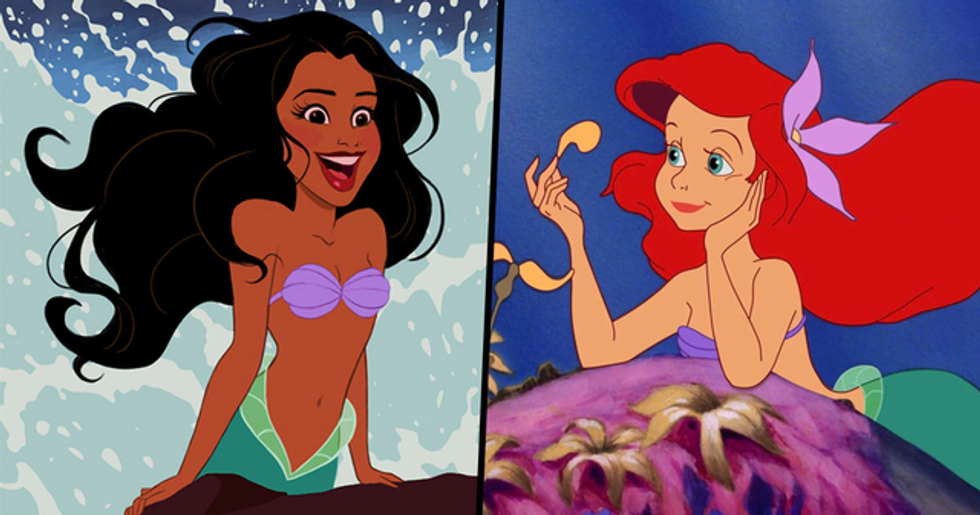 This Wednesday, Disney announced their casting choice for Ariel in the upcoming live-action Little Mermaid movie - and it was a surprisingly controversial decision. The nineteen-year-old actress and singer seemed highly qualified to play the childhood favorite - apart from one thing. Many are holding a prejudiced view about Ariel's appearance - more specifically, about her race. Bailey is an African American actress, which many don't see as the "correct" choice to play this fictional character.

Well, now some have taken to social media to try to prove their point about Ariel's Caucasian origins. And the best part? They're failing to make any valid points on the topic - and some mermaid experts are even fighting back.

The Little Mermaid is a beloved Disney cartoon.

And, on Wednesday, it was announced that the casting decision for Ariel in the much anticipated upcoming live-action remake had been made.

Cast in the role?

Nineteen-year-old actress and singer, Halle Bailey. In many ways, she was the ideal candidate for the role - but some had a major issue.

The titular Little Mermaid, Ariel, was highly recognized for her long, almost neon, red hair. This is not a feature shared by Bailey.

Most of the internet had a pretty positive reaction to the casting.

There were many reasons that Bailey was well suited to the role - not least because of her truly astounding singing talent. Ariel's character arc revolves around her voice, after all.

But there were, of course, some with particular issues.

May I just say that I have a HUGE PROBLEM WITH THIS!! Disney FINALLY comes out with a movie that has redhead as the… https://t.co/y8WnVztxKc
— Rhiannon Cupps (@Rhiannon Cupps)1562553573.0

Many pointed out that they were disappointed with the casting choice.

But some have taken things a step further.

Now people on Twitter are attempting use science to prove that a mermaid could never be darker skinned. Yep - you just read those two words in the same sentence: "science" and "mermaids." Another wrote, "Correct me if I'm wrong. But isn't it physically impossible for Ariel to be black? She lives underwater, how would the sun get to her for her to produce melanin?! Nobody thought this through..?"

@slicksliding @Skylerhxc @comicfan1516 lol I bet you felt super smart when you typed all this out too but anyway https://t.co/bYSKfGTLbX
— Brooke Binkowski (@Brooke Binkowski)1562211418.0

Many pointed out the fact that the vast majority of creatures who live under the sea tend to be of a darker hue.

But they didn't just rely on science.

Some also pointed out this character from the Little Mermaid television spin-off, in which there was a darker skinned mermaid.

Fact box: the Little Mermaid lives on a TROPICAL CORAL REEF with a calypso-singing lobster with a strong Jamaican a… https://t.co/LCkAkHhczV
— Caitlin Moran (@Caitlin Moran)1562224488.0

If you think about the setting, the musical style of, and, in fact, the accents of the best friends of  The Little Mermaid, it sort of makes more sense that she wouldn't be strictly Caucasian.

One Twitter thread was dedicated to taking down this racist view.

In Japan Ningyo are mermaids with beautiful voices who can be both beautiful or ugly depending on the story. Also t… https://t.co/StisWhC6GM
— Sacha Coward (@Sacha Coward)1533891310.0

One scientist, Sacha Coward, has selflessly dedicated his time to debunking this myth. "Applying science to mermaids is a rather silly thing to do, they are symbols not biological creatures. Also, the science I have seen being used is really bad science: Cherry picking elements of the natural world to argue why Ariel should be pale and redheaded makes no sense," he said.

Today I want to talk to you about mermaids that are NOT white. I want to share some awesome stories of merfolk from… https://t.co/gBddWBKkhk
— Sacha Coward (@Sacha Coward)1533888116.0

Coward has also made a conclusive list of the many different non-Caucasian mer-creatures in legend - proving that they really do come in all shades.

Here are some of the highlights.

Coward has clearly done his research and managed to find a selection of excellent examples that totally disprove the "mermaids are white" theory.

And the evidence is clearly there.

There is an incredible number of examples that really do confuse the theory that Ariel - or, in fact, any mermaid at all - would have to be white.

And they come from all around the world, too.

Oshun is also part of the Yoruba pantheon of Orisha deities. She is a god of rivers and freshwater. Sometimes she i… https://t.co/hiRu5me60G
— Sacha Coward (@Sacha Coward)1533889542.0

The worldwide tradition of mer-people seems to suggest that there would be no original Little Mermaid if it weren't for these other creatures.

Surely, this will be the end to the criticism.

If science proves that there is no reason for anyone to still be holding these prejudices, that's pretty hard to argue with. At least, let's hope so! For more of the internet's best reactions to the controversial casting decision and to hear the full story, keep scrolling!