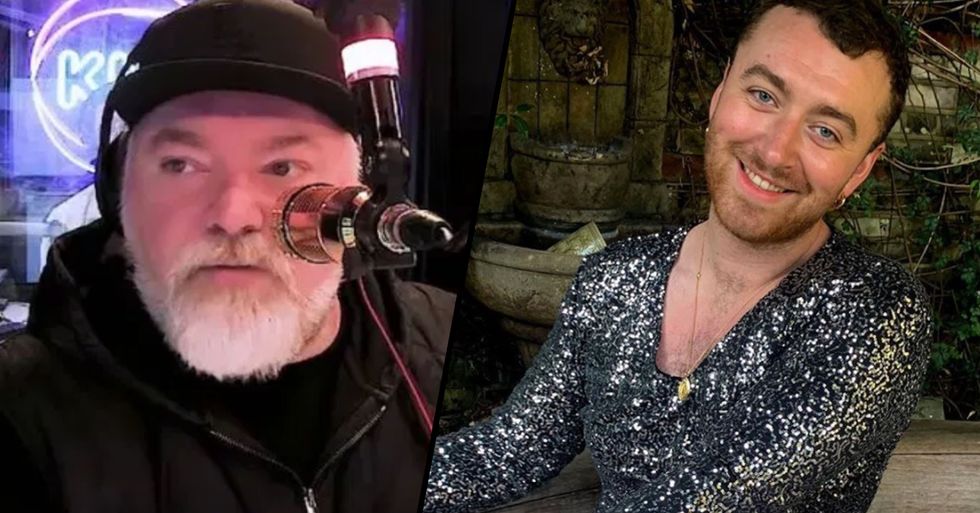 An Australian radio host recently lost it while on the topic of gender-neutral pronouns, and launched into a brutal attack against the singer, Sam Smith, who identifies as non-binary.

Keep scrolling for the full story, and to hear his scathing comments against the singer for yourself...

Sam Smith has recently become the face of the non-binary movement.

Having come out as "non-binary" last year, singer Sam Smith is leading the way in which we view and address gender norms.

But before that, Sam was known for being one of the most successful pop stars of the decade.

Let's start from the beginning... From Cambridgeshire, England, Sam made their first big break after their collaboration with Disclosure in the track "Latch" back in 2012.

Since then, the singer has risen to unprecedented levels of fame.

In a candid interview with British GQ, Sam recently detailed their experience with sexuality, explaining how "not fitting in" can make them feel "really depressed and sad." The singer also recalled "violent and scary" experiences within the gay community shortly after moving to London, admitting that they were forced to have therapy to come to terms with the "traumatic" encounters.

And, last year, Sam revealed that they now identify as non-binary.

In a candid interview with actress, Jameela Jamil, Sam discussed topics such as fame, body image, and confidence. They then went on to admit that they have experienced conflicting emotions about their gender identity.

As a child, Smith revealed that they were “chubby" and “carried extra estrogen" in their chest, making them self-conscious and more susceptible to bullies. “I had breasts," Smith said. “I used to get my mom to write a note to the school when I was like 8 so I wouldn’t have to go to swimming lessons. So it’s something that’s been in me forever."

And they even shared a topless picture on their Instagram, along with the caption: "In the past, if I have ever done a photoshoot with so much as a t-shirt on, I have starved myself for weeks in advance and then picked and prodded at every picture and then normally taken the picture down." "Yesterday I decided to fight the f**k back. Reclaim my body and stop trying to change this chest and these hips and these curves that my mum and dad made and love so unconditionally."

It was after reading up on the definition of gender non-binary that Sam realized their true identity.

"When I saw the word non-binary, genderqueer, and I read into it, and I heard these people speaking, I was like, ‘F**k, that is me," the hitmaker revealed.

Sam has identified as "non-binary" ever since.

And they revealed shortly after their announcement that they wish to use gender-neutral pronouns, and even wants others to use them when referring to them. So, instead of "he," "him," and "his," they want to use "them," "they," and "their."

A source close to the star explained: "This is a decision Sam has thought long and hard about, including doing a lot of reading on up it. He knows that it will take some people longer than others to fully get it." "First the request is going out to mates and then it will be passed on to the music industry too. It’s an exciting and groundbreaking time for him."

Many of their fans were quick to show their support and approval.

But the most recent hater was a little more than just another keyboard warrior on Twitter...

It was a radio host with a huge platform and audience.

This week, the singer was a guest on Australia’s KIIS FM Kyle and Jackie O radio show...

But, before their appearance, the hosts seemed to be having a little difficulty getting their heads around Sam's choice of pronouns.

Co-host, Kyle Sandilands, in particular, wasn't happy with the rules.

"I’m sick of this. Why do I have to do this?" Kyle fumed, according to Daily Mail Australia, prompting his colleague, Jackie O, to reply, "That’s the way it is these days, hun."

He then made a rather shocking comparison.

He pondered: "I’ll be now allowed to use the N-word, because I identify as a black woman. Is that right? Is that how it works?"

But the baffled radio host just couldn't get over the fact that they're simply words, and continued: "I’m not buying into the 'their’," "Kyle later stated. "I can’t. It’s too much. 'They’re an absolute sweetie' like there’s two of them."

Jackie attempted to diffuse the situation...

The whole conversation was a total disaster.

Luckily, the singer was able to complete the interview with no pronoun slip-ups...

Sam called into the radio chat from his home in England, where he is currently self-isolating. But many have criticized for the singer's recent quarantine antics... Keep scrolling to find out why.